Originally posted September 27th 2014 on the Seafoam Gaming forums Title: SPIKEY WALLS System: Wii U (eShop) Price: 0.99 Release date: 9/18/2014 The main game/story This game is as simple as they come. Made as a “parody” and “experiment” of sorts in order to see which games appeal to people on the Wii U eShop, RCMADIAX halted the development of his fun little tabletop games … END_OF_DOCUMENT_TOKEN_TO_BE_REPLACED 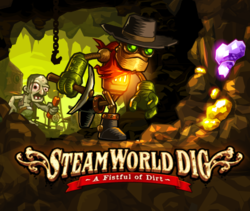 Originally posted September 17th 2014 on the Seafoam Gaming Forums As this (Finally) gets put on my website, Image and Form confirmed SteamWorld Heist, another game in the series. Look forward to it! Title: SteamWorld Dig System: Wii U (eShop) Price: 9.99 Release date: 8/28/2014 The main game/story The story isn’t the biggest or most important thing in this game, but it still plays a … END_OF_DOCUMENT_TOKEN_TO_BE_REPLACED

Originally posted September 4th 2014 on the Seafoam Gaming Forums Title: Tappingo 2 System: 3DS (eShop) Price: $2.99 Release date: 9/3/2014 The main game/story The sequel to the surprisingly fun game Tappingo, released earlier this year on the 3DS eShop by CIRCLE, this is a puzzle game similar to Picross where you draw lines in a certain number of spaces, in order to make a … END_OF_DOCUMENT_TOKEN_TO_BE_REPLACED

Originally posted September 1st 2014 on the Seafoam Gaming forums A LONG time ago, before the Wii U even launched, I heard of a game called Jett Tailfin. It was set to be in the launch window of the Wii U, and… It never came. But then, out of the blue (Literally) it has appeared via the Wii U eShop. Was this strange looking mobile … END_OF_DOCUMENT_TOKEN_TO_BE_REPLACED