Thanks to KOEI TECMO AMERICA for the review code

Being the final part of the Dusk Trilogy, Atelier Shallie Plus is an enhanced version of the original PS3 game from a few years back, now ported over to the Vita. Despite being the last part of a trilogy, you wouldn’t really know it at first if you played the game as your first Atelier title like I did, since it starts off with a new character named Shallistera, hailing from a distant village suffering from a water shortage.

Upon arriving at the town of Stellard, she realizes that her village isn’t the only one suffering from water problems, and a mysterious phenomena known as the Dusk is causing problems all around the world. As Shallie struggles to get the help she needs for her village, another Shallie named Shallotte is living her ordinary life in the same city, hoping for a successful career. Other characters from the series will appear from time to time, but there’s really no feeling of being lost if you choose to start here like I did, as both stories from the two Shallies are self-contained and aren’t continuations from prior chapters, so they don’t suffer from the types of problems that would occur if you played Trails in the Sky SC before the first part.

When it comes to the presentation, Atelier Shallie isn’t all that special, simply getting the job done with your typical fare of 3D models, dual audio and a good variety of environments to explore. This is like deja vu… Anyway, you won’t see or hear any styles that haven’t already been done in other RPGs. Props to the soundtrack though for having amazing battle themes in the score.

Despite appearing to be just another RPG at first glance, Atelier Shallie goes in a more relaxed direction compared to most other RPGs on the system. Yes, there are still turn-based battles here but the game doesn’t really put a big focus on fighting enemies as much as it does with exploration and gathering materials. (Although when it comes to fighting enemies, its nothing we haven’t seen before.) 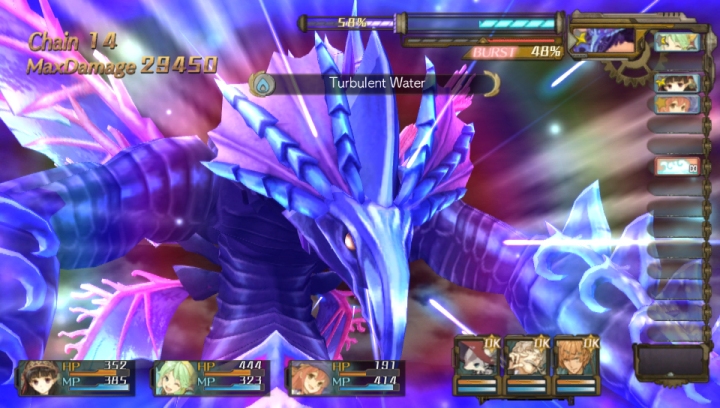 Usually what a chapter requires you to do is to go out and complete a few story-related quests before focusing on miscellaneous quests (known in the game as “Life Tasks”) until the game asks you to end the chapter. It’s a rather laid back game with little stress involved, although you can choose to make the combat easier or harder if you so desire. 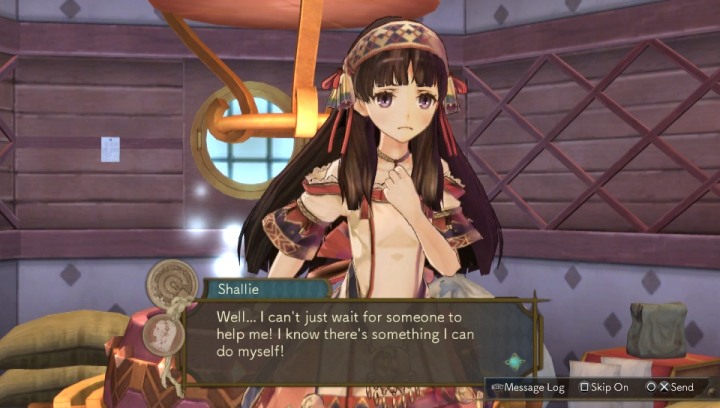 However, the biggest feature of Atelier Shellie comes from item synthesis, which is pushed heavily throughout the story and is required to complete numerous life tasks. To synthesize, you’ll need materials and you get them when you’re out exploring the tiny areas outside of town. In each of these areas you’ll see a few spots that sparkle with a green light, and hitting the X button while in front of these spots will cause Shallie to gather whatever material was resting there.

The gathering spots reset every time you leave and enter the area again, but don’t expect to use this as an easy way to grind for rare materials, since during the 4th chapter of the game environmental changes will come into effect and change the type of resources available in such areas at random. Once you have enough materials, you can then pick and choose which ones from your container to use to create any item you currently know the recipe to. Nearly all of these recipes are obtained by purchasing instruction books at in-game shops, giving you a bit of a hunt to find them all.

It should be noted that simply following the minimal requirements for a recipe isn’t enough to make a good item, as there are different kinds of ingredients and skills that you can place in a particular slot (for example if a slot requires a liquid item you can place any item from the category into the slot, the only real difference coming from the better quality liquids or skills that improve the attributes) It’s a rather complicated system that would take way too much time for me to explain anymore, but it’s the only “unique” feature of this game.

Finally, the last thing I want to mention about the game comes from its biggest problem; the framerate. Almost everytime I was out of a battle the framerate failed to stay consistent, going up and down over and over again to the point that it was pretty irritating to look at, with the game running the absolute worst in areas with a lot of scenery. (One forest area I travelled to for materials threw a fit when I rotated the camera around a tree my character was walking on)

Battles ran a bit more smoothly, but even those suffered from slowdown whenever anything got busy. While I never suffered any crashing bugs, the performance was still a bad issue that made it hard for me to enjoy the game. Sure, it’s possible to get used to it eventually, but I couldn’t help but feel that there should have been better optimization put in place to make the game run at a locked framerate.

In conclusion, Atelier Shallie Plus is an RPG that doesn’t really offer anything new to the table. Yes, it has a fun alchemy system to tinker around with, but it suffers from feeling generic overall.

I will say that despite this big problem I did have some of fun with the game, mainly due to the laid-back nature allowing me to play the game at a nice pace, so I can see it being a great fit for on-the-go play. The game also seems to have an easy platinum compared to most of the other RPGs that I’ve reviewed, so if you’re a trophy hunter then this should be a stress free game to kick back and enjoy.

Of course, it goes without saying that if you’re a fan of the Atelier series, then you were going to buy this anyway. However for anyone else who simply wants another RPG to play on their Vita, this game may not be the best choice for you. While the difficulty options can make the combat more difficult, the game still is relatively laid back in its pacing compared to other RPGs on the system, and it’s nowhere near as long as titles like Trails of Cold Steel II. Still, it’s not the worst RPG I’ve played, and performance issues aside it can be a fun way to relax for a weekend or so. Just don’t expect this RPG to be groundbreaking. I give Atelier Shallie Plus: Alchemists of the Dusk Sea a 6 out of 10.

One thought on “Atelier Shallie Plus: Alchemists of the Dusk Sea (Playstation Vita/TV)- Review”