Taking place shortly after the confusing ending to BoxBoxBoy, Qbby and gang are back for a final chapter! The mysterious black mist has conquered other planets in the galaxy, and using their new space ship Qbby and his friends set out to restore each planet to a peaceful state. 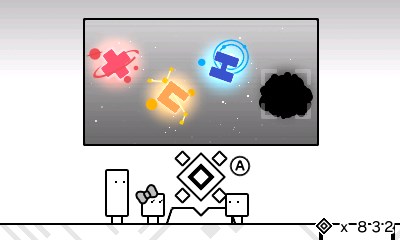 Just like the prequels, Bye-Bye Box-Boy doesn’t give the player a single box of text explaining the story in detail, at least not during the main game. The only way you’ll be able to figure out what the heck is going on is by watching the cutscenes or reading the descriptions of OST songs from the in-game shop.

While the original BoxBoy stuck with a monochromatic art style, and BoxBoxBoy added a dash of color in some spots, Bye-Bye BoxBoy takes it to the next step by adding even more color and variety! Now each of the planets you visit have their own color scheme to admire, and the special boxes you gain during select worlds are color-coded to indicate specific features. It’s not super colorful, but it does add a bit of personality to these worlds. And as a sweet bonus if you have any of the amiibo from the Kirby lineup, you can scan them to play as colorized versions of Qbby, unlocked in the costumes menu.

That being said, if you somehow dislike the default color scheme, Bye-Bye BoxBoy gives you the option to choose between two different color palettes, if the dashes of color aren’t your style. This means that if you prefer the bland, monochromatic style of the original game, you can choose that as your color theme. There’s also an unlockable Game Boy theme for the game if you have the previous installments on the same SD card, but I strongly recommend that you never use it, since it makes the entire game (including menus) a vomit green, and doesn’t seem to have been made with much thought put into it.

When it comes to the soundtrack, I don’t have nearly as much to comment on, as it’s the same sort of elevator music found in the previous installments. Thankfully it doesn’t seem to recycle as much as BoxBoxBoy did, but that could also be due to how the original BoxBoy soundtrack wasn’t memorable at all, and I’m simply forgetting most of those songs.

If you’ve played the original BoxBoy for any length of time, you’ll feel right at home playing Bye-Bye Boxboy since the core gameplay remains the exact same, without the dual-set gameplay that BoxBoxBoy used. Unfortunately, going back to basics also means that the slow start of the game returns as well. While the original BoxBoy had a slow start with a few easy worlds before the moderately challenging ones, this game takes the slow start to another level, as the first three planets consist of nothing but horribly easy and boring levels that don’t take much thought to clear as the default Qbby. The game tries to balance this out by bringing back challenge worlds that you buy from the in-game store, but even those levels feel incredibly easy and don’t put up much of a fight.

To break up the monotony of clearing short levels one after another, the game does give you special block types at the end of each planet to play with in the final worlds, from exploding blocks, rocket-powered blocks to remote controlled ones, and these are a lot of fun to experiment with. (They’re even provided by cute, tiny blocks named Qbabies!) Unfortunately, these fun abilities go away after you leave the world they were introduced in, and they don’t make a reappearance until the bonus worlds of the game, where every single gimmick is thrown at you in levels that are actually challenging and fun to enjoy!

It’s just a big shame that you will be forced to play through 18 worlds lacking any challenge whatsoever in order to even unlock these levels. Granted, these four challenging worlds are a lot of fun to play, but I just wish that the entire game was this challenging and engaging, instead of having the main story feel like an extended tutorial that just won’t end. While the game felt great for my car rides to school, I felt like I was just pushing away pointless filler until I reached these bonus areas, which is where the real fun began for me.

In conclusion, Bye-Bye Box-Boy is a mixed bag, similar to the preceding games. It retains the same solid gameplay that the original BoxBoy used, while ignoring a lot of things that BoxBoxBoy changed up, which in some cases are for the better. (The return of challenge worlds being the best example) Unfortunately, it also has the worst difficulty balance of the series so far, with every main story world offering little resistance for 100% completion, before the bonus worlds offer the best level design and challenge the series has seen yet, with four worlds of clever, challenging puzzles that mix every concept seen in the game before that point.

It’s just a shame that you have to spend several hours clearing 23 worlds of boring, incredibly easy levels just to get to the best parts of Bye-Bye BoxBoy, but at the very least, HAL was kind enough to introduce a fun gimmick in every world that helped boost the game’s variety and prevent it from feeling as stale as BoxBoxBoy, which in my opinion makes the overall experience of Bye-Bye Boxboy the most rewarding of the entire franchise to date.

Overall, this was a good finale, even if the main game is insultingly easy and may put you to sleep if you’ve completed the previous installments. Here’s hoping that HAL makes a challenging BoxBoy game for Nintendo Switch, that takes every clever concept from the bonus worlds of this game and leads to an entire game filled with challenging and creative puzzles. Still, for $5, this 3DS finale is an easy recommendation over the other entries in the series. Just don’t a challenge of any kind until the end. I give Bye-Bye BoxBoy a 7 out of 10.