The game stars a Shrine Maiden known as Reimu, who after unleashing the power of a mysterious golden orb, must set out on a quest to stop the sudden appearance of clones that are flooding into mysterious dungeons!

Using a similar artstyle to the other Touhou Game I reviewed for the site, Genso Wanderer is played with a top-down perspective, with really cartoony backgrounds and characters. The opening cutscene does use 3D models, however I can’t help but feel that said cutscene reminds me a lot of those strange MMD videos that flood Youtube, since the animation in that cutscene wasn’t exactly smooth and the background objects looked a bit too realistic compared to the nature of the characters.

Thankfully despite the simple artstyle and odd nature of the introduction, the game does move at a good pace, and the menus are easy to navigate with a helpful map being nice and visible during exploration.

Despite it missing from the title for obvious reasons, Touhou Gensou Wanderer is a Mystery Dungeon game in nearly everything but name only, containing a lot of the same mechanics and structure as most games in the main Mystery Dungeon series, making the entire experience feel like a parody of the genre, not unlike how Touhou Double Focus was a parody of the Metroidvania genre. As usual for games in this genre, you and a partner go into randomly generated dungeons with many floors, defeating enemies and gaining experience along the way as you try to make it to the end floor, which might even have a boss lurking in wait.

There are also a few interesting mechanics available here that I haven’t seen often in the other MD clones I own, the most notable one being the “Gap” system, where depending on the types of gaps that you find, can help you store extra items and protect them from traps or enemies, which can be a really helpful way to protect health or hunger items and save them for tougher dungeons. 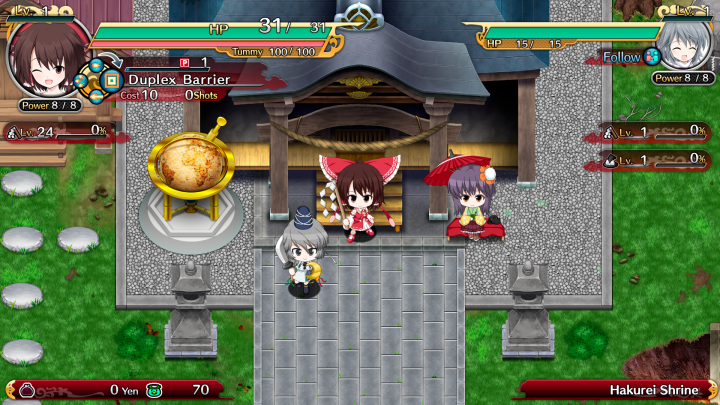 Another handy system comes in the form of danmaku projectiles, which uses up power points that enemies can drop upon defeat. These are essentially the equivalent of the moves in the Pokemon Mystery Dungeon system, as they deal a signifiant amount of damage compared to what a standard attack from an equipped item would do, which combined with helpful card items (the Genso equivalent of Orbs from the PMD series) and the many pieces of equipment hiding in dungeons. (Some of which can offer bonus effects, such as one wand that will power up your danmaku moves while it weakens your physical attacks)

Last but not least, there’s a fusion system, where you can combine certain items in order to improve their stats and effects. It’s gradually unlocked as you go through the game, but if you play your cards right and know what to fuse, you can create some powerful weapons that’ll destroy enemies and make the long dungeons a lot easier to clear, especially since death won’t take away your equipped items (it’ll just reset your level and take away some yen, which makes storing money before entering tough dungeons strongly recommended.)

In conclusion, Touhou Genso Wanderer is a roguelike that sadly misses the mark on some things. While it does look cute and retains most of the solid foundations of Mystery Dungeon games, it ends up dragging a lot more than it should, especially with the lack of a truly gripping narrative and frequent difficulty spikes.

Still, the general gameplay is solid, and while it’ll require more trial and error than your typical PMD game, there’s still a lot of replay value to be had in this game, with plenty of tricky trophies that’ll require a lot of hours to obtain. Considering how retail copies will come with the excellent Touhou Double Focus, that game alone will make the price of the retail version worth it. However if you’re only interested in buying this game digitally by itself, then you need to keep the nature of the game in mind, as it’s not quite for everyone! I give Touhou Genso Wanderer a 6 out of 10, and recommend it for die-hard Mystery Dungeon fans looking for something similar to play on their PS4.