The game opens up with a very simple premise: Your friend has been infected and you must find a vaccine to cure your friend within thirty minutes! All the while you take on evil zombies and learn more about the mysterious mansion that you’re trapped in.

Being made as an intentional throwback to the earliest of Survival Horror games, Vaccine goes for a blocky 3D look, meant to replicate earlier PS1 horror games such as Resident Evil, and it’s quite faithful, being crisp and sharp when it comes to the resolution, while still being blocky looking for the sake of feeling nostalgic.

That being said, the old visuals can hinder the actual gameplay at times, most notably when it comes to the fixed camera angles changing around, which can lead to moments where you may struggle to walk in the right direction, since you could be walking around a room one moment before the camera changes perspective and you’ve lost track of where you were meaning to go the next. It gets even more annoying when you’re hoping to pick up items, since they can be rather difficult to see since the only indication of their existence comes from a flicker of light every now and then, and with how small items usually are, even that can be difficult to notice.

Upon starting a New Game, you’re given thirty minutes to search the entire mansion and find the titular vaccine before returning to your friend in the starting room to beat the game. As mentioned earlier, this game aims to be similar to the first Resident Evil game, and having never played any game like that before, I was curious to see how I’d adapt to it. At first, things seemed rather simple. You find a knife in the first room, then you equip it in the menu before setting out into the mansion to find the vaccine. The first notable thing right off the bat comes from the controls, which are different from what you might expect. Instead of being able to move 360 degrees in all directions with the joystick, you can only move forward, turn to the left or right or walk backwards. These are considered “Tank Controls” and while I was used to them in Mega Man Legends, (though in that game the shoulder buttons turned you around and not the D-Pad) it took a while to get used to them here, which led to me using the Joycon buttons to control my character instead, which worked out a lot more in my favor.

But by far what makes Vaccine stand out the most compared to the game it takes inspiration from comes from the random aspect of it. In a move from a roguelike, every single playthrough of the game is completely randomized, with only the starting room staying the exact same, (thus giving you a guaranteed weapon every time you start over) meaning that in theory, this could be an amazing way to increase replay value and encourage people to try this game over and over again without knowing what’s beyond the next door. 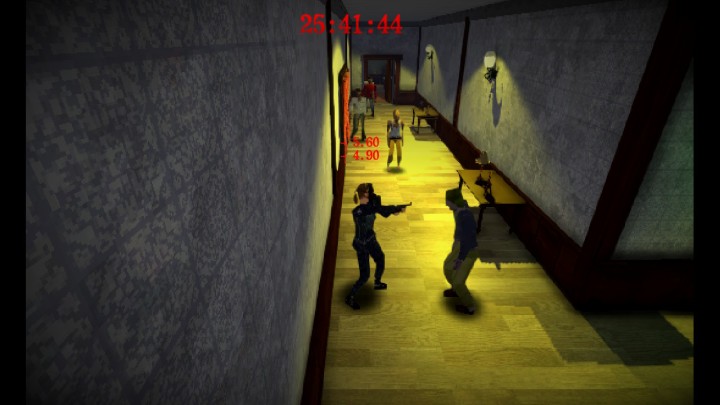 Unfortunately, this is also Vaccine’s biggest flaw, since the location of enemies can be a big issue. One time I managed to go through ten rooms without spotting a single enemy for me to kill, only for me to open the next door and get ambushed by the most annoying enemy in the game, this four-legged fleshy thing (seen in the press picture below) that slices through your HP like paper which almost always gives me a game over if I encounter it before leveling up a lot. Likewise, I had one playthrough where I was actually able to obtain a gun and had success with defeating tons of enemies and gaining levels like crazy, but got destroyed by the same creature as the enemy-less attempt.

One time I was actually successful in obtaining the titular vaccine by luring a big monster out of a lab room, but that monster quickly did 50 HP of damage to me (you only have 100 HP total) which knocked me out as soon as I exited the room and came into his line of sight. I assume he’s meant to be the final boss of the game, since he was guarding what you’re meant to be searching for to begin with, but it was really surprising to see an enemy do so much damage in a game where it’s very possible that you’ll get to the vaccine room within five minutes of the thirty minute timer.

Speaking of enemies, let’s talk about the combat. While you do get a guaranteed knife at the start of every playthrough, using it can be a bit tricky if you aren’t used to the game. You must pull out your weapon with any of the shoulder buttons, before firing or attacking with the A button. For close combat, this works decently well against the generic zombie enemies that hide in the mansion, as you can just attack a bit, back up, and continue until they die, but for the tougher enemies like the dreaded four-legged creatures, you’re forced to aim down in their direction, which can make battles more or less a case of who’s luckily enough to not die first, and if you’re fighting those four-legged things, it’s always going to be the creature who survives. (unless you level up your health resistance and determination enough, that is) While it’s not as unfair and unplayable as Paranautical Activity, it can be very annoying to get stuck on a run that’s doomed due to a lack of enemies to gain experience from, which can make actually clearing a run more luck based than skill based.

Still, I found the game surprisingly addicting, and once I got the grips of the controls it was something that I tried to beat every now and then, even if the difficulty balance is awful. There doesn’t seem to be any way of saving your progress in the middle of the run, either (it would just prompt me to start a New Game every time I tried) which is really unfortunate considering the Switch’s portable nature. Thankfully it’s really easy to go into sleep mode on the pause menu, but I wish they at least had a quicksave option in place.

In conclusion, Vaccine was surprisingly easy for me to get into, despite not being familiar with the survival horror genre whatsoever. (in fact, this would actually count as my first ever game that plays like this) It does have some flaws, mainly revolving around the nature of the visuals and the sudden difficulty spikes, but if you can get past these and adapt to the game, you’ll find a rather addicting timewaster on your hands. Unfortunately, said difficulty spikes, along with the length of a normal playthrough (unless you want to go for the cryptic True Ending which will require a guide to figure out how to unlock) makes Vaccine very tough to recommend at the usual $10 price. Without the achievements of the PC version giving you a reason to do the New Game plus eight times in a row, there’s little reason to take on those stricter time limits unless you’re feeling really masochistic, and outside of playing it just for the heck of it, there’s also little reason to keep playing after you figure out the True Ending riddle and solve it.

Still, if you don’t mind these gripes, then you will find a fun experience with Vaccine. Just be sure to be prepared to adapt to the odd controls and sudden difficulty spikes due to the randomly generated nature of the mansions, and you may be able to get a lot more enjoyment from this game than I did, since while I did have fun with the game, the difficulty spikes made this a game that I only played in short bursts every now and then, and I doubt I’ll see myself obtaining that true ending anytime soon. I give Vaccine a 6 out of 10, and recommend it to survival horror fans wanting to experience something similar to the old gameplay style from the past, even if the random generation causes a major difficulty balance.