Thanks to Atooi for the review code

In this action platformer from the creators of the stellar Mutant Mudds Super Challenge, you take control of a young chick who sets out on a quest to rescue his friends from an evil witch, all with the help of his new worm buddy!

After a few games with a focus on emulating an 8-bit presentation, Chicken Wiggle finally stands out as being one to primarily focus on representing the 16-Bit generation. The musical score and visuals are given an upgrade compared to the previous Atooi games, and for the most part it works out in a fantastic way! When it comes to the visuals, each world in the single player mode has a unique theme to it, which is also accompanied by some music that fits the theme well enough. You also have the cute design artwork of the main duo that will accompany the main modes in the game.

Unfortunately, outside of a nice musical throwback to Mutant Mudds when you get a game-over, I didn’t find the soundtrack to be nearly as memorable as in the 8-bit Atooi games, save for three themes. (one of which isn’t even 16-bit like the rest of the game, but rather a nice 8-bit theme that plays when you ride around in the hot air balloon powerup)

Chicken Wiggle offers three main modes for players to enjoy. The first mode is the single player story mode, which gives you six levels per world to tackle as you rescue your birdy friends from cages at the end of each stage, being introduced to new gimmicks and powerups along the way, such as a balloon that can only fly a certain distance at a time, or a beak upgrade that lets you destroy nearly every wall in the entire stage. While the concept sounds pretty simple, getting to the end of each stage will quickly turn into a tricky journey, as they’ll require you to master the use of your worm buddy, who can stretch out like a bionic arm to pull you to any surface he latches onto. Just like in Mutant Mudds, collecting all 100 of the gems scattered around each stage is required for 100% completion, but joining the returning gems are new FUN balls that are more hidden. Usually behind a secret wall, collecting each letter of F, U and N combined with the gems will reward you with a very tiny color change on the corner of the level’s card from the level select screen, to the point where it’s barely noticeable and might make you feel like 100%ing a stage is pointless. 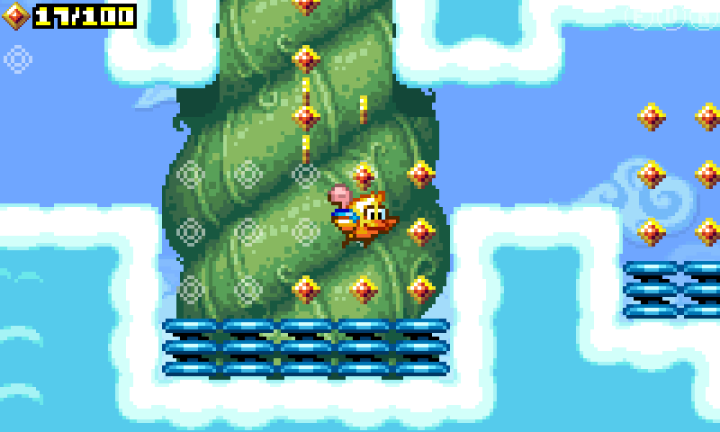 Besides the single player, the other major attraction of Chicken Wiggle comes from the level editor mode. Seeming completely random and out of place, it actually works pretty decently, allowing you to choose between several level themes (even ones you haven’t encountered in the main story yet) while also being able to add every major obstacle that appears in the story mode. (again, even ones you haven’t encountered in the main story) You can even change the win condition in this mode, so you don’t have to focus on rescuing birds, and can instead go for something different like collecting all the gems in a stage. Once you feel a level is good enough for the world to play, you can upload it to the online server and hope for others to download and enjoy your levels, while also checking out the levels of other players.

I downloaded several levels from the server, both pre-release and post-release, and the quality of those levels varied greatly. Sometimes you’d get a nice, short but challenging level, such as one I downloaded from a guy named Hoff where you had to fall down a long vertical shaft, dodging a series of spikes to reach the cage at the bottom. It was a short, but very tricky level that required skillful use of the worm and dodging abilities, which led to it being a fun one to explore. On the other hand, you could also wind up with a poorly made level that’s insanely long and lacks checkpoints, which can lead to it being pretty cheap and unfair. You can see who downloaded and gave the levels a heart before you play them, but once you download them and play them for yourself, you have to go to the online server in order to rate it yourself.

In conclusion, Chicken Wiggle is a fun action platformer, with an average length Single Player mode and a moderately enjoyable level editor for you to be creative in. While this game does have one major advantage from the 3DS Mario Maker in that you can actually share your levels online, there really isn’t much of a point to the level editor outside of checking out some new levels every now and then to extend your playtime, but your mileage could heavily vary on the quality of the levels. I made my own short level, dubbed “A Casual Stroll” which should be pretty easy to find, if you want to check out my mediocre level design skills.

By far the best part of the game comes from the single player adventure, and while it’s sadly not as boss-heavy as Mutant Mudds Super Challenge and contains some pretty hectic moments every now and then, the adventure is still solid and packed with lots of fun, creative ideas. It’s nothing revolutionary or anything, and the game’s title may make no sense at first glance, but you’ll be surprised with how much fun this cute adventure is if you give it a shot! I give Chicken Wiggle an 8 out of 10.