Thanks to ARC SYSTEM WORKS for the review code

In a world infested by Zombies thanks to a virus outbreak, you must lead a brigade of multicolored animals to ward them off as you reclaim territory! Outside of that basic concept, the game has barely any story.

Being a port of an iOS game, it’s very apparent that this wasn’t made with the switch in mind, since the entire game is stuck in this small display in the center of the screen, with a pretty border of all the multicolored animals surrounding this display. It does work for the system, (the Switch being a tablet device after all) and it even allows for touch control if you play it in handheld mode, but it is a bit disappointing that there doesn’t seem to be an optional full screen mode. The music isn’t that memorable either, save for a main theme that likes to repeat a lot on the world map. 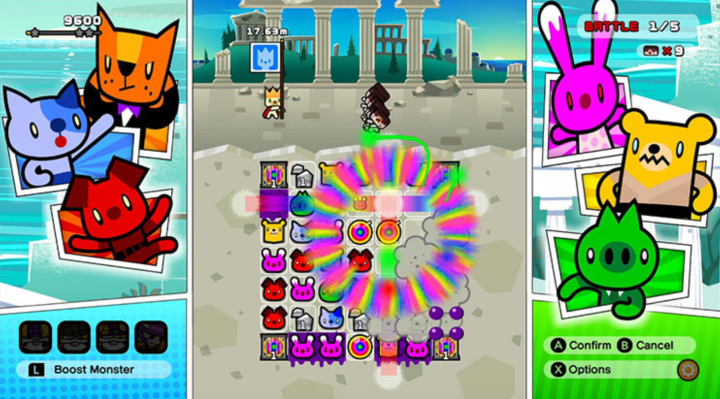 Advertising itself as a “Beat-em up puzzle game”, Boost Beast is honestly more of a strategy puzzle game, since the main objective isn’t to clear as many matches as possible for the highest score, (though that will get you more stars) but rather to knock out all the enemy forces with the proper color, as if you try to send a ton of blue cats after orange zombies, nothing will happen. This can get really hectic in boss encounters, since the boss will not hesitate to move closer and closer to you while you scramble for proper matches that will successfully take him out. Most rounds won’t take too long to clear at all, and outside of trying for a higher star count, there’s little reason to replay an older level.

Unfortunately, there was one common problem that kept popping up during Boost Beast, and that was the random nature of the boards. While it’s common to have boards be randomized in games like these, for this game in particular it ends up being infuriating at times, as you can go a long way without getting any monsters of the color you need to even progress, making some attempts feel more based on luck than on skill, especially on levels with unique board layouts.

The four Boost Monsters you’re able to summon can help fix this, as they can introduce the same powerups you gain from matching four or five animals at once, along with doing a few other things, but some time there’s just no way out of some situations, which is a shame.

Overall, Boost Beast is a by-the-numbers match three game with a bit of strategy, not unlike Ironcast. However, despite it’s cuter artstyle and more forgiving pace, it ends up suffering from the basic nature of Match-Three games due to some levels being completely luck based. Thankfully there’s no microtransaction or energy nonsense to steal your money, but it can make the game feel a bit cheap at times. Still, considering the handheld nature of the switch along with the fact that even I was able to have fun with this game despite the general quirks, it is something that won’t hurt you too badly if you decide to go ahead and check this game out. I give Boost Beast a 7 out of 10.