Thanks to Nicalis for the review code

The visual artstyle used in Knight Terrors is very reminiscent of the MSX era of game, mostly due to the simplistic coloring of the sprites being more similar to games on that system than the usual NES inspired games we tend to get. Outside of that change of pace though, there’s not much else to comment on, with the music being utterly forgettable and the menus being very basic.

From the beginning, there’s only one mode available for you to choose from, and that’s the normal mode that shows you the ropes of the game. In this mode, you must alternate between the left and right shoulder buttons to jump and attack respectively, defeating every single enemy that comes your way without letting any of them slip by you, while also jumping over spikes and through gates that crop up to prevent yourself from getting damaged by hazards. Lose all your health, or let too many enemies pass by you in a level and it’s game over.

After reaching a certain score target, special subweapons and powerups will become unlocked for you to encounter in future attempts, ranging from a handy pickaxe, boomerang, a golden heart, along with plenty of others that can be unlocked with constant attempts at improving your score, and come in real handy to supplement your short-range sword attack. If you keep at it long enough, you’ll even be able to unlock a new mode, which is where I have my biggest problem with the game as a whole. 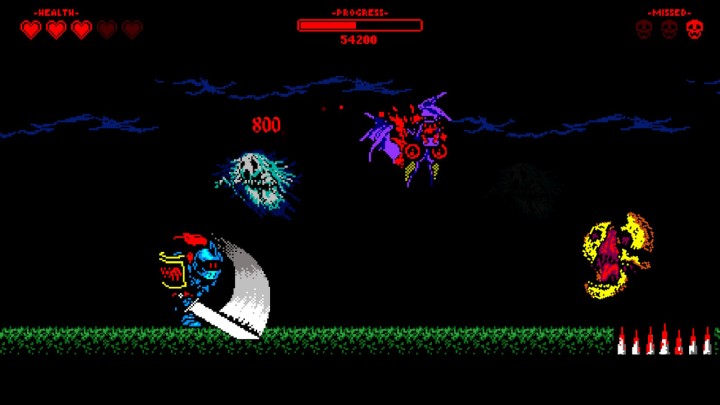 You see, upon reaching a certain amount of points in the normal mode, you’ll unlock the next mode, Flight Terrors, which is a dreadful, dreadful take on the decent formula from the normal mode as it forces you to avoid the ground at all costs as you go through gates Spikey Walls style, trying to kill any enemy in your path, (while also removing the need to prevent enemies from going off the left side of the screen) all while the focus is more on the player surviving for a long time than defeating enemies. (Although if you fail to kill many enemies, you won’t be getting too many points no matter how long you survive)

Like with the normal mode, it’s still a high score race and the more enemies you kill and the longer you survive, the more stuff you can unlock, including the next game mode, so on and so forth. However, while you can also unlock more items from the normal game mode, you cannot unlock the other game modes just from the normal mode alone, as you must unlock them by being good at each of the new modes you unlock, one by one. The problem with this unlock system comes from the fact that compared to the slow, but gradual climb of the normal mode (which does get to be as difficult as Flight Terrors after several minutes of non-stop play, as a natural difficulty increase should be), Flight Terrors is an insanely high spike in difficulty, being something that takes a significantly shorter amount of time to get a game over in than the normal mode thanks to its gimmick, but the catch is that you must get a high score of around 50,000 in Flight Terrors to unlock the next game mode. No unlocking it from the normal game mode, (unless the game’s lying to me or keeping a secret) you must master this crazy challenging mode as well.

Why couldn’t all modes but the final one (which according to what I read, is an endless version of the original mode without the level-based system that refills your health and enemy miss counter after each one) be unlocked from the get-go to give the player the chance to try all the modes out and find the one they’re the best at, encouraging them to get good at all of them, or better yet, why can’t getting a really high score in the normal mode unlock other modes besides Flight Terrors? It just seems pretty cheap to lock the player from the other game modes if they happen to be bad at one but very good at the others, and unlike other games that do give an addicting “one more try” factor that encourages you to try again and again even if you’re terrible at the game, I never really felt like replaying a mode more than once, due to the drawn out length of a normal mode run, and the insanity of the Flappy Bird aspects of Flight Terrors making sessions far too short and not even a fun sort of challenging. I have a feeling that if I was able to access the other modes I saw on the high score lists, such as a cool sounding one known as “K-Type”, I might actually be able to find a mode that’s addicting enough for me to stick to, but alas, since this game wants me to go through each mode one at a time to even see what the other modes are like, I’m never going to be able to test them out.

In conclusion, Knight Terrors is a very disappointing auto-runner that has little to offer outside of a few different takes on the core game, if you can even unlock them that is, since the difficulty spike of the first mode you unlock can be more than enough to deter players from pushing forward to unlock the other modes. With the lack of an online leaderboard as well, there honestly wasn’t much motivation for me to keep playing for a higher score in the mode I was good at like the arcade games of old, since it still takes a long time for the normal mode to get frantic enough, while Flight Terrors starts off too frantic, with no middle ground inbetween the two modes. and will the score not being adjusted to account for the higher difficulty. (For example, if a harder game mode gives you more points from the get-go than an easier mode, it gives the player the feeling that they’re doing the same things they’d do in an easy mode, but on a more challenging setting that’s more rewarding, while in this case it gives you the same point tallying for both difficulties, which doesn’t provide that rush of excitement)

As a major fan of arcade style games and as someone who loves chasing a high score if a game engages me (even if a game is insanely difficult to the point it downright cheats, looking at you Ikari Warriors), something’s not right when a game with a cool artstyle and a great price is not able to engage me for more than five minutes at a time, even when it goes from a gradual difficulty curve to insanely challenging, since the high challenge doesn’t seem to give you as many points to give the player the rush of excitement they would need for a “one more time” feeling. For $3, this game isn’t a bad value for the price, as it won’t hurt your wallet if you do decide to go on the run, but be warned that this experience is not a walk in a park, and it will take a long time for the game to get engaging, if it ever does for you at all depending on what modes you’re even able to unlock. I give Knight Terrors a 4 out of 10.