Thanks to Crunching Koalas for the review code

Right off the bat the first thing I can praise the game for is for its incredible 2D artwork, which at first glance seems to resemble Severed when it comes to the way the characters are designed, but the backgrounds and color choices are all intriguing. Combine that with strange sounding techno themes and you have one unique presentation that manages to stand out, even if it’s strange in doing so.

The goal of the each level in Lichtspeer is to make it to the end, defeating every single enemy that shows up on screen and defending yourself from incoming projectiles, which is all done by aiming your trusty spear at the oncoming enemies and throwing them, with more bonuses being offered if you aim at an enemy’s head multiple times in succession, which can lead to higher score bonuses. Meanwhile missing an enemy multiple times in a row will leave you stunned, allowing an enemy to take advantage of the opening to kill you. These stages move at a good enough pace, and it is fun to constantly retry your favorite stages for a higher score and better medals. (which are rewarded for perfect play and for getting a high enough score/combo count) 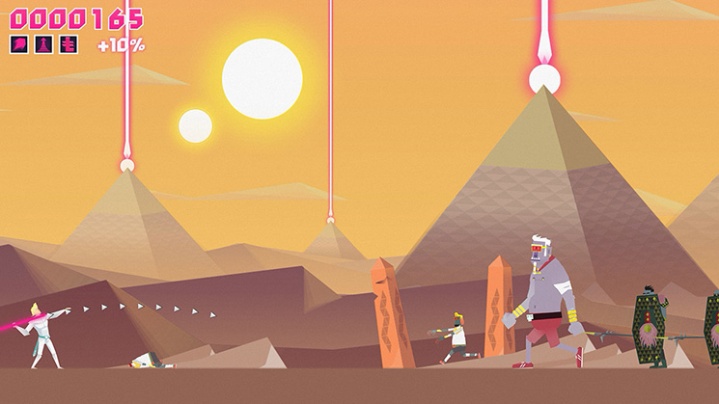 Boss battles are also thrown into the mix, where large enemies will appear at the end of the last screen of certain stages that’ll take multiple hits to defeat as you try to figure out the weakness. Some bosses will be heavily guarded, and thus will only expose themselves to damage at certain moments, which will require you to focus on the other enemies trying to kill you during these idle times.

Luckily if things get too difficult, you can always activate one of the equipped skills, which will gradually level up over the course of the game, and can grant helpful bonuses such as a triple shot, a powerup shield among others. Dying on a screen won’t make the level restart from the beginning, (at least, on Normal mode, which I played for this review, though there are several difficulty options that make the game a lot harder) which helps relieve the frustration factor, although it obviously will lead to a low score and negate your chances at getting a higher score. 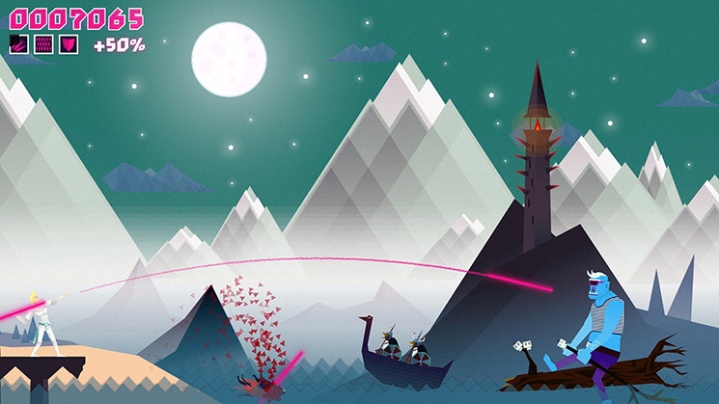 New to the Switch version of the game is an exclusive co-op mode, where the second player will fly above the first and be able to assist in warding off the enemies, and this mode is by far the best way to play the game, since having a friend on standby to assist you makes the tougher stages a lot easier in the long-run. Unfortunately, this mode is only available locally, but it’s easy to set up and well worth playing for the fun of it.

In conclusion, Lichtspeer is a mixed bag. Despite having stellar presenation and a fun Co-Op mode, the main game can be a bit of a drag when playing solo, as the engagement never really kicked in for me when I was playing by myself, which is really strange since the co-op is exclusive to this port of the game. Still, I was having more fun with a friend that I ever did by myself. It is a bit addicting to keep at it and go for the gold ranking in each stage, along with racking up a good combo of precise headshots once you get into the rhythm of the game, but this is an experience I feel is best suited with a buddy. 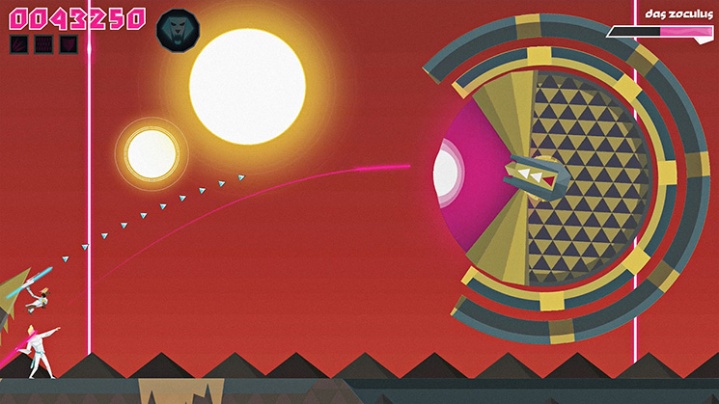 It’s not a bad game by any means when you’re going solo, just one that doesn’t manage to engage the player right away, which led to me losing interest in playing this in my free time real quickly, but will certainly be a title I’ll happily revisit when having friends over. It should be noted however that this version lacks the achievements found in the other versions of the game, which were notoriously difficult for being some of the hardest out there. (no thanks to an absurd one requiring 100 hours of playtime) You’ll still be able to get satisfaction from beating this game on the hardest difficulty with the highest rankings, which actually makes this one of the very few cases where not having the achievements benefits the game, as the artificial padding from the playtime trophies are nowhere to be seen as well. Thus, I give Lichtspeer: Double Speer Edition a 7 out of 10, and I still recommend it for the unique presentation and the fun co-op mode, which is a lot more enjoyable when you have a friend on your head helping you defend and ward off enemies.