Thanks to Rising Star Games for the review code

In this isometric puzzle adventure, you take control of a human who has been transported inside a video game world, as he must gather the abilities he needs to solve every last puzzle and get out of the maze!

Trying to replicate the exploratory puzzle games of old, Lumo takes place in an isometric dungeon with multiple floors, going for a 3D feel that throws the idea of any sort of cool background out of the window, since during the majority of your adventure you’ll be dealing with each room being placed over a starry background. However, the prologue portion that shows off the story is shown with a completely different artstyle, using absolutely hideous 3D models and textures to show off said opening area. Seriously, you should see it for yourself.

Luckily once the intro is over and done with, the majority of the game looks a lot better, even if it’s still fairly basic for a puzzle adventure game, the menus work and the isometric view, while irritating on some screens still fits the tribute portion very well. Oddly enough, there’s barely any music to speak of in the game, and what’s there is so quiet that it’s incredibly easy to forget about it.

The main objective of the game is to go through each room as you solve puzzles, collect items and find your way to the exit of the multi-floor dungeon! Each room is a mini-challenge of sorts, and like dungeons from older Zelda titles the fun is trying to solve each puzzle while collecting numerous upgrades and items to make said puzzles easier while also opening the door to new ones. For example, at the very beginning of the game you can’t even jump much at all, only being able to barely get across hazardous pits that are one tile in length. It isn’t until you pick up a magic hat upgrade that lets you jump properly that the game slowly starts to open up with creativity. 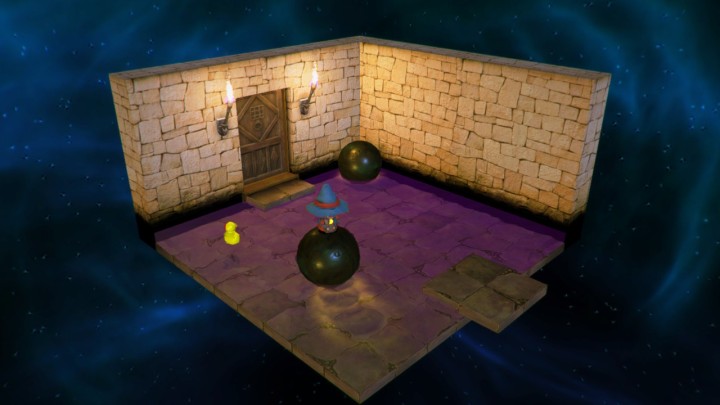 You see, as more pathways are unlocked, along with discovering new routes and more rooms with creative puzzles to solve, a ton of optional stuff opens up as well, most notably the hunt for optional collectibles such as cassette tapes that are often round in rooms not even on the map, which require a lot of thinking outside the box to discover, and it’s a lot of fun once you do so all on your own! Another type of collectible that is more noticeable right off the bat are the Rubber Duckies that are hidden around on most of the normal screens, requiring you to bounce over it and safely find a screen exit to keep it. Unfortunately, it’s when collecting these and progressing through the middle to late portions of the game where LUMO demonstrates some problems.

While you might think controls would be the biggest issue of this game due to the isometric perspective and the usual problems those games suffer with controls, that’s actually not the issue, as Lumo offers three control types that offer easy ways for anyone to get used to the control. Rather, this game’s biggest issue comes from the isometric camera, which can get in the way of even some very simple rooms because of how difficult it can become to judge distances, and when the game starts throwing instant-death pits and hazards your way when you fail to make these tricky jumps, then the game stops being fun for a while. 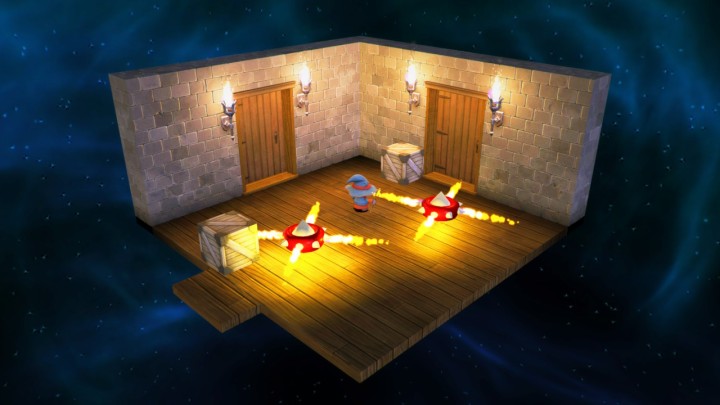 This isn’t much of an issue in the normal Adventure Mode, where you have infinite retries and the only things that you can lose upon dying are any ducks you failed to exit the room with, but in the challenge mode that gives you a limited amount of lives to play through the entire game with in one sitting, it ends up making the game a lot more frustrating and cheap, and not being able to tilt the camera by much doesn’t help much in that regard. Even if you do skip the hidden ducks, sooner or later you’ll come to a platforming bit that’ll require figuring out the depth perception, and that alone will be likely to put a nail in your coffin. There’s online leaderboards for this mode to see who can speedrun it the fastest, but as of this writing not a single person has actually completed the old-school mode in the Switch version of the game. I made it quite far, but the aforementioned camera problem lead to my death on Floor 3.

In conclusion, LUMO is a fairly average puzzle adventure game, with some clever puzzles and plenty of achievements to unlock, leading to a fairly lengthy and challenging experience. Unfortunately, even with being able to tweak the isometric controls the camera isn’t always that great, and there are times when certain puzzles can feel downright cheap in difficulty because of the camera. That combined with some average presentation (Especially in the beginning of the game) leads to an experience that isn’t likely to get anyone new to these games hooked, but will still be a lot of fun for those who enjoy tinkering around with games like these, hunting down all the hidden cassette tapes and other collectibles while also aiming for the achievements. For the digital price of $20, I think that’s a great price for a game like this, but the retail version costs a bit more due for obvious reasons, and I think that version in particular might be better to wait for a sale, so you should go Digital with this game if you’re willing to deal with a high file size. For all that, I give LUMO a 7 out of 10, and recommend it to puzzle adventure fans looking for something new, even if the game is far from polished.