Thanks to FDG Entertainment for the review code

In this Zelda-inspired adventure game, you take control of a female knight named Lily, as she sets out on a journey across the world to break the spell of an evil Wizard who plans to invade the kingdom with his army of demons! An interesting twist is that this story is presented via a grandfather telling it to his grandkids, which leads to some multiple choice scenarios that can pop up during the adventure, along with lots of funny excuses for why he takes a break from the story whenever you die!

Taking obvious inspirations from the Zelda Franchise, Blossom Tales at first reminded me instantly of a fun hidden gem I played on Steam a while ago known as Rex Rocket, which made me believe that the developers of this game went for trying to rip-off that game’s artstyle for the characters… Only to realize that the same developers made both titles. Needless to say, the character designs are very similar to that of the prior game, with yellow faces for the humans and a pixel art style that has been seen many times already. 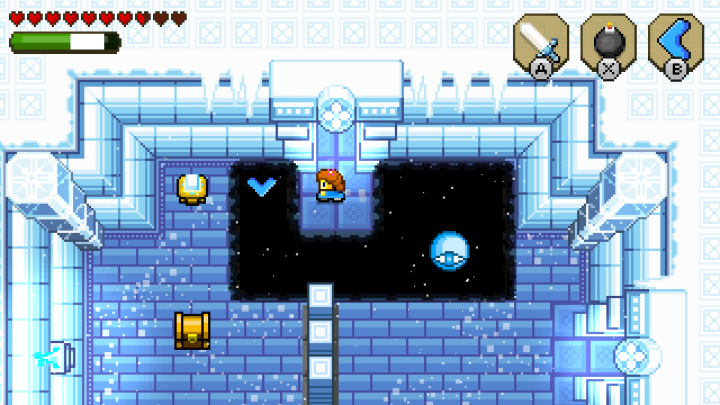 What makes up for the lack of variety in the art style, however comes from the attention to detail put into the backgrounds and enemy designs as when it comes to most places in the overworld, along with the several dungeons this game has to offer, this game is gorgeous, with a lot of lovely detail put into the walls of the dungeons and the design of the game’s world, along with some cool looking enemies that really shine even in the done-to-death art style. It might not be too impressive in general, but it’s still clear that the world of this game was at least designed with a lot of passion and love.

Blossom Tales controls pretty tightly, using a similar control scheme to that of the GBA Zelda titles with the extra buttons that the Switch has over that older handheld, as you can freely remap the button locations of your sword attack along with the two items that can be equipped. Likewise, every major item in the game is based on classic items from Zelda, which can be both a good and bad thing, since it means that while it’ll be quick to get the hang of for Zelda veterans like myself, it also means that there’s little when it comes to new, creative ideas.

Outside of some fun tile puzzles that appear a bit too frequently in my opinion, most of the game’s dungeons consist of basic puzzles and lots of enemies that are easy to take care of. In all honesty, this leads to the dungeons feeling a bit generic and boring for my tastes, and I had a lot more fun exploring the overworld and finding hidden caves with their own puzzles and challenges, since clearing one of those would often lead to a heart or stamina piece.

Yes, Stamina is a feature in this game, and like A Link Between Worlds it’s the main method of using items. As long as you have enough stamina, you can use any of the items you equip to the secondary and tertiary buttons, or you can just wait for the bar to fill up gradually when items are not in use. (or if you use a green potion) Just like the game it takes inspiration from, this system works great, since you don’t have to go and hunt for item ammunition in order to clear a minor puzzle, with the only thing stopping you from clearing a puzzle being the lack of an item entirely, or just running out of stamina and not being able to recharge in time. By far the story is the most “unique” part of the game due to how its told, since as mentioned earlier there are multiple choices in certain parts of the plot that will impact certain events or cause certain fights to happen. This won’t add a lot of replay value by any means, but it is a nifty touch and helps this game stand out a bit despite how little it does to try some new ideas.

While Blossom Tales doesn’t do anything special to reinvent the wheel when it comes to the action-adventure formula that inspires it, the game did manage to be a decent time sink that was easy for me to get the hang of due to the sense of familiarity I have with games of this genre. However, after playing Ittle Dew 2 recently and getting used to the open-ended nature of that gem, the linear nature of this adventure was a lot more difficult to get used to, combined with a done-to-death pixel artstyle that does serve as a throwback to the developers’ other title.

Zelda Fans won’t need to jump on this if they’re hoping this is going to be a hidden gem with lots of uniqueness and creativity with the items, but if you were hoping for a title with a more action-adventure approach, then this should at least be decent enough for to go through the few hours it will take to clear the main story, and the extra hours it would take to 100% the adventure. It may be a concept that was done way better by the actual franchise Blossom Tales takes inspiration from, along with other indie games, but this is still a competent and fun adventure for those who don’t mind the familiarity of everything. I give Blossom Tales: The Sleeping King a 7 out of 10.