Thanks to SEGA for the review code

Taking place immediately after the end of Yakuza 5, Kazuma Kiryu is sent and freed from prison, and upon returning to his home, he sets out on a quest in search of his companion Haruka Samamura, before getting involved in a crisis where two dangerous clans both want to destroy each other. Thus, Kiryu must investigate the motives of these two clans and also guard his family and friends at all costs! While Yakuza 6 does reference a ton of events from past games, it does at least allow for the option of getting you up to speed by reading summaries of the first five games, similar to Trails of Cold Steel II recapping you on the first game.

However, Yakuza 0 (The only Yakuza game I’ve dabbled in prior to this) is strangely absent from this summary, and Yakuza 5’s summary is the only major one that’s pretty much required reading for newcomers to the franchise like myself, as it explains exactly what happens right before the prologue to this game.

Compared to Yakuza 0, (Which was developed for both the PS3 and PS4) Yakuza 6 looks sharp on a standard PS4, with more detail in the environments, better lighting and a much, much faster UI in the form of Kiryu’s cellphone, which is a lot snappier to use compared to the basic menus in Yakuza 0. The models look more realistic and the game’s presentation simply does things way better than 0 in all but one aspect: The framerate. It’s not a bad change of pace, but compared to 0’s smooth 60 FPS, Yakuza 6 is now made with 30FPS in mind, which isn’t honestly too terrible of an issue save for the rare framerate drip now and then, and the game still controls perfectly fine.

The only problematic visual quirk I noticed while playing on my standard PS4 that got a bit distracting at times came from when I explored several buildings such as the SEGA Arcade, where going up the stairs would cause some pretty ugly screen-tearing now and then. It doesn’t seem to happen too much when I’m outside, but in some buildings the game just does not like vertical movement in the slightest. Apparently this isn’t a problem on the PS4 Pro, but I don’t have one of my own to confirm this with, but it is something fellow PS4 owners should keep in mind if that stuff bothers you, even if brief.

Yakuza 6 is an adventure game where the main objective is to progress the story by completing numerous tasks the game requests of you, whether it’s to figure out more clues behind Haruka’s situation, take out some thugs or investigate the town in general. These main objectives are explained and pointed out in a helpful way, with indicated locations on your mini map from the that you can easily follow by chasing after the purple arrow that guides you towards your direction. This same method of navigation can also be used if you want to go to a certain place (such as say, the arcades) by placing a pin on the mini map, which will bring up a green arrow for similar easy navigation. 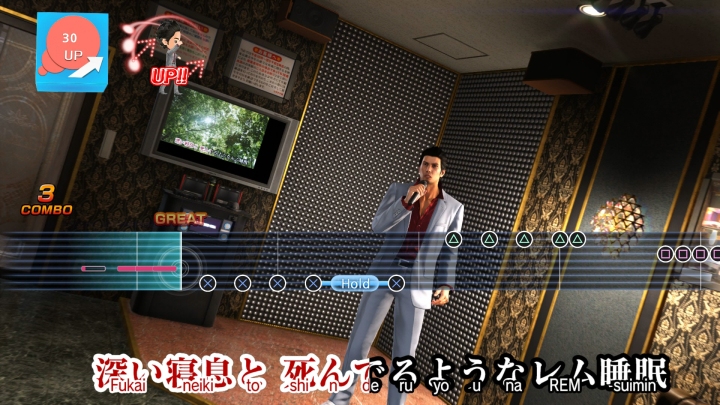 Every now and then while traversing the city of Kamurocho, you’ll engage in combat with criminals, whether they be random thugs, Yakuza or criminal gang members. Unlike Yakuza 0, where fights would start with a short little cutscene, Yakuza 6 gets right into the action as the moment a group of thugs approach you’ll be right in the middle of a fight. Fights are quick and fluid, with you being able to perform numerous combos with the Square and Triangle buttons, while also using the Circle button to throw enemies or pick up objects. Mastering combos and learning when to block or evade is the key to beating enemies flawlessly, especially on the higher difficulties or when up against a boss. If you’re in a pinch however, you can activate a Dragon Rage Meter with R2, which will cause Kiryu to unleash his full potential and allow him to perform stronger, more devastating attacks that can turn the tide of battle. It may sound like a hassle to get pulled into a fight while trying to walk somewhere, but with this seamless battle system it actually becomes a whole lot of fun and a good way to get experience, which you’ll need a lot of to improve your stats and learn new skills.

The experience system in Yakuza 6 isn’t your standard experience system either. You instead get points in one of several different divisions depending on what you accomplish, and these points can be spent to increase your base stats or learn new skills, from being able to do a dashing kick attack, taking weapons from enemies during a combo and using those weapons against them, to being able to run more without getting tired. Experience comes from the form of battling, as you’d expect, but there are other helpful ways to gain experience, the easiest coming from the Task List, a series of mini-achievements that the game wants you to accomplish, whether it’s by doing well in some of the Sega Arcade games you can play in the actual Kamurocho arcade, talking to people a certain amount of times, or by completing sub-stories that don’t progress the main plot but introduce fun shenanigans of their own, (such as a really funny one where a phone assistant starts developing suspicious motives for controlling mankind, one that introduces you to a really weird typing minigame, and a heartwarming one where you must deliver a Haruka fan some rare merchandise) which will certainly help later on as you tackle the main story.

Speaking of sub-stories and minigames, prepare to be hooked on doing them like I was when playing through this game. As soon as I was able to, one of the first things I did was check out the two Sega Arcades in Kamurocho, one of which is returning from Yakuza 0 and the other being brand new. The returning one offers up the same minigames that it did in Yakuza 0, those being Space Harrier, Outrun, Super Hang-On and Fantasy Zone. (the latter of which no longer requiring you to unlock it) All four of these arcade games run just as stellar as they did in 0, and I had tons of fun playing Fantasy Zone in particular, which was even better knowing that it would give me in-game experience for playing for the fun of it. The emulation is spot-on with these games, although you can’t customize the controls which is a bit of a bummer. Another bummer comes from the selection of newer games in the new Club SEGA arcade that you can visit, only offering two titles that aren’t really that special. Puyo Puyo is just an endless challenge mode where you fight infinite amounts of opponents until you lose, and while the puzzle game is still as addicting as ever, it’s a bit of a shame to see that this is some strange endless mode using the Puyo Puyo Tetris engine, but obviously without the Tetris elements, instead of something cooler like the original arcade release from Compile, or maybe even something more obscure like Puyo Pop Fever or Puyo Puyo SUN. Virtua Fighter 5 is a bit better, as it’s the download-only PS3 game rereleased on PS4 as part of this game, although the only modes available is a standard arcade mode with a lot of characters and a 2 Player Versus mode, so if you’re new to Virtua Fighter or have only played the Sega Genesis version of 2 like I have, then you’re not going to get any sort of help with this game. Both of the newer arcade games also include a local multiplayer option from the game’s title menu, so you can at least enjoy both of those with a friend if you so wish. Still, it would have been nice to maybe have some NPCs challenge you to those games as a means of introducing a new sub-story, although you are given some tasks for all the arcade games (Getting high-scores in the old arcade games, and beating all the CPU opponents in the newer games) to boost your experience anyway, so it’s not a total loss, although I really wished they added newer retro arcade games instead of recycling the Yakuza 0 lineup for the old arcade and going with oddball choices for the new Surely arcades change their machine lineup in 28 years?

If you aren’t a fan of Sega’s other IPs for some odd reason, there’s no need to worry, as there are also some other minigames that you can do. One of these is a very enjoyable Darts minigame, where you can challenge another person at Club SEGA to a game of Darts, as you try to get the higher score. This was one of the more modern minigames I found myself enjoying the most, and it’s another great way to gain experience points. Karaoke makes a return from Yakuza 0, along with a new, very strange mini game known as Live Chat. It’s kinda like a typing game, where you must press buttons in a sequence before a timer runs out in order to watch models partake in epic activities. Yes, even this quirky game gets you experience, and the sidequest leading up to the introduction of the game is incredibly hilarious.

In conclusion, Yakuza 6 is a really strong adventure game. Having an engaging story that can even hook people who didn’t play the previous installments thanks to handy recaps of most of the games, (Though it’s recommended that if you have any interest in those games that you go and actually play them before venturing too far into the story, hence why I stopped myself before the start of Chapter 3 for the sake of keeping the main storyline a surprise for when I go and beat 0-5 eventually) along with simply being a fun game to go goof of in and do all sorts of subquests and minigames for experience and just for the fun of it, this is easily a great entry in to the series, minor flaws and all. It’s very surprising that after a long road of getting this series to grow an audience in the West with Yakuza 5 in 2015, we’re already at what’s considered to be the final entry in the current storyline.

The fun I had playing this game, along with how much easier it was for me to get engaged with compared to Yakuza 0 due to a quicker start and more engaging story certainly makes me want to go back and complete all the other games, and look forward to Yakuza Kiwami 2 this August. I give Yakuza 6: The Song of Life an 8 out of 10, and recommend it to Yakuza fans waiting for the next installment in the series, along with those wanting to get into the series, but only if you don’t plan on playing the rest of them anytime soon.