Staying mostly true to the name, Japanese Scenery features a lot of Japanese Scenery. This is a jigsaw puzzle game where the main goal is to simply clear jigsaw puzzles with the touchscreen or controllers, and all of them are japanese themed, from a Japanese shrine, an active cherry blossom season, Tokyo at night, and a few other pictures that all animate as you try to solve them. With a UI that’s made with touchscreens in mind, this game is a dream to operate in handheld mode, although in docked mode it doesn’t look nearly as good. The music’s mostly generic, although one of the three tracks is really, really good.

Being a jigsaw puzzle game… There’s really not much to comment on. Having played the Steam version during last year’s summer sale, I do at least have that version to compare the Switch version with, but the only difference outside of the controls comes from the lack of achievements, which were only awarded for clearing puzzles anyhow. Having played the basic, 60-piece puzzles in all three control schemes, (Macbook touchpad, Pro Controller, and Switch touchscreen) I can easily say the Switch handheld mode is the best way to play the game, since you can easily touch and drag the tile you want in no time at all, which single-handedly cuts the time that it will take to clear puzzles by a significant amount. The pro controller/joycon setup is OK at best, the cursor being controlled with the stick and the buttons being used to drag pieces, but it’s very slow and cumbersome to the point it’s not worth the effort. 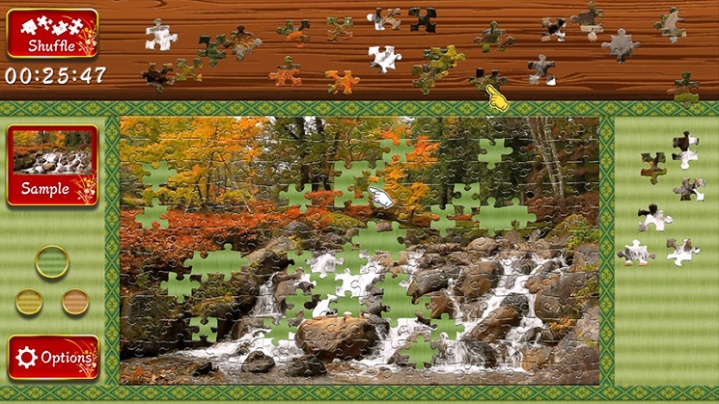 Outside of that, this is simply a set of ten jigsaw puzzles, one per buck. Each puzzle offers multiple sizes to solve starting from 60 pieces up to an absurd 350, although as you unlock more sets of puzzles, they’ll start off on higher difficulties with the 60 piece version being unlockable, which I found to be a bit strange and irritating since you’d think all the puzzles would be at 60 by default and you work up from there.

In conclusion, the Switch version of Japanese Scenery is the best version of the game by far solely due to the control scheme it offers with the Switch touch screen. Outside of that and a gallery mode to view completed puzzles in their full glory, there really isn’t much here besides the ten puzzles of varying sizes, and the game gives you what it says in the title. You can’t really go wrong with some jigsaw puzzles on the go, but you also need to be in mind that there’s not much else this game has a purpose for, outside of beating your best times (which is pretty much only a thing that you can do on the touch screen instead) or racing with up to four friends (but there’s no point in doing that since you’ll all have to use the clunky controllers instead of the touch screen)

I give Animated Jigsaws: Beautiful Japanese Scenery a 7 out of 10. With how simple of a transition this game took to jump from Steam to Switch, I wouldn’t be surprised if the other two games in the series (Animals and Japanese Women) get ported to Switch in the near future as well.