Thanks to Farsight Studios for the review code

Being a port of the same game I reviewed for the Wii U back in 2016, usually I wouldn’t repeat things I already stated before. However, The Pinball Arcade has seen a bit of some tweaks since then, for better and for worse, mainly due to the addition (and removal) of three new seasons never released on the Wii U version. Due to the removal of a lot of tables, (more on that in a bit) all I can really judge are the 30 some tables we currently have, with some of the new ones not seen on the Wii U version, along with those I’ve previously played on Wii U and in Stern Pinball Arcade.

In Stern, I mentioned that one of my biggest problems with those tables is that they were really, really hard to see. Well, luckily that issue isn’t as big of a problem in the normal Pinball Arcade, at least for most of the tables included. (from the 60s to 90s) These tables weren’t riddled with text like modern Stern tables are today, and the widebody tables are really easy to see on the Switch’s tablet screen, and if for some reason the lighting isn’t that good, you can just tweak the lighting around the table to make the bulbs lighter and the room a bit darker, and that’ll usually make most of the tables visible. Camera option 2 is the best choice for viewing the tables in my opinion, and while they won’t look nearly as nice as the PC version, it does get the job done for most of them.

That being said, some tables look just as bad as their Stern Pinball counterparts, mainly the free table Frankenstein (Which replaced Arabian Knights as the free table despite being the freebie in Stern) and the Ghostbusters table, which suffer from being so tall with all sorts of text littering the screen that the text is just too difficult to see. Some tables that had visibility problems like Harvey Davidson look much better on the other hand, and the Table UI is better too compared to Stern’s, so there’s that at least, and the pinball tables are visible for the most part to the point you can have lots of fun playing them. The generic main menu background music from the Wii U version of the game returns, but this time it has vocals which sound horrible, but outside of that the tables do sound like they should. There’s also a vertical mode, which can make some tables look a bit better, but it also makes your switch completely impractical to use without touch screen controls, which just don’t work the same as traditional shoulder buttons.

Pinball has barely changed since I reviewed Stern and the Wii U Pinball Arcades, so I won’t be explaining the mechanics all over again. What I will be explaining are some of the changes made to the Switch version of TPA that the Wii U version doesn’t have, for better or worse. The biggest and most glaring change by far is one that will impact every version of TPA in the near future, and that is the removal of every single Williams and Bally tables, killing nearly 40 tables from the lineup, limiting it to Stern tables (which already has their own application, although a much worse one) and Gottlieb, my personal favorite Pinball creator.

Why did this happen? Well, while the technical answer comes from the expiration of the licenses, this game did have Williams and Bally Tables when it briefly launched in April, containing the complete Seasons 1-7, only for the tables to be yanked hours later. The old version had Tales of the Arabian Knights as a free table, which played just as good as it did on the other versions, but when the game finally returned to the eShop Tales was yanked from my game with the Version 1.2 update, replaced with the pretty awful version of Frankenstein I mentioned earlier. Despite claims that it’ll stay in the library for those who played it once on other versions of the game, (Without having to buy Season 1 like the Switch port required) it was still removed from my version despite me playing it to the point I cleared every single standard goal in the game, which doesn’t bode well for those without any purchases tables on the other versions of the game. So why were the tables pulled to begin with? Well, the common consensus from the pinball community is that the tables were put on Switch without permission from Williams and Bally, which led to them having to yank TPA ASAP to prevent removing the tables from the other platforms. Thus, the Switch is the first platform going forward without the classic tables that helped make TPA famous, a very sad direction that TPA is taking all due to a contracting error and picky companies not wanting to renew their licenses. 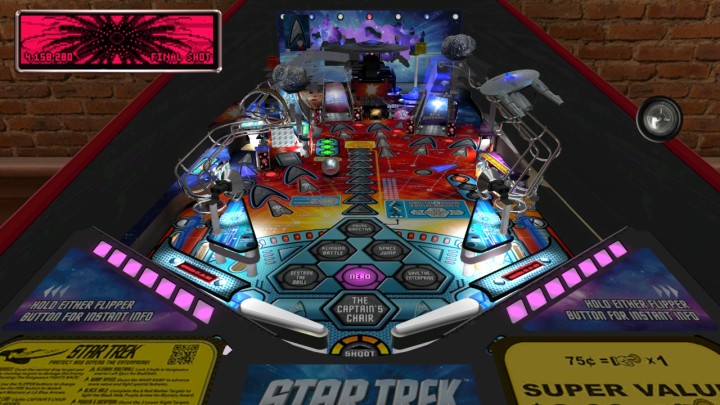 So what’s left after this whole ordeal that you couldn’t get on Wii U? Well, the Stern tables formerly exclusive to Stern Pinball Arcade are now in this app, although they require a bit more loading when exiting out of them compared to the other tables in the app, and several new Gottlieb Tables that didn’t hit Wii U are available to play here, such as the fantastic Rescue 911, Big Hurt and Pistol Poker tables, along with some fun EM era gems such as Jacks Open and Centigrade 37. That being said, some duds are included as well, such as Cactus Jack and Al’s Garage Band which suffer from bland table design and balls falling down the sides really fast. It’s a huge shame that the future of TPA is in question because of a silly mistake, but the Gottlieb Lineup is solid and Table Packs 1, 2 and EM are highly recommended while the others are only OK to recommend at best. (With the Stern Tables being a bit too pricey to be worth a purchase in this game, as you can just buy a retail copy of Stern Pinball Arcade for less) Season 8 is promised to launch this summer, but whether or not it’ll include hits such as Simpsons Pinball Party or more EM tables remains to be seen/

In conclusion, The Pinball Arcade on Switch is still a great Pinball sim, offering up a lot of old school pinball fun for more affordable prices compared to the pricey season passes from before. Unfortunately, with so many tables lost to expiring licenses, let alone lots of great ones such as No Good Gofers, Paragon, and Black Knight, this new state of affairs for TPA is rocky at best, despite having the potential to be the best version of the game by far. If you want to check it out, I don’t recommend relying on the lame pack-in table, but rather starting with one of the three Gottlieb packs I mentioned before, or the oddball Doctor Who single table/Alvin double pack if you want something a bit less expensive. There’s still great pinball fun to be had, just not as much of it.