Thanks to Enjoyup Games for the review code

Claiming to be based off a real pinball table, the first thing I’m going to do right away is to call that an utter lie. Presumably, the developers meant that this game was meant to be inspired by real tables, and in that regard the play field does look incredibly basic, akin to early 60s and 70s tables. Unfortunately, instead of being basic in a charming way, the game looks incredibly generic, with the pinball table being the exact same image from the scoreboard plopped onto the field. The dot matrix scoring UI is also really generic, appearing to be some program’s default font masked with a filter.

As for the things on the table, you don’t have that much. Just two simple ramps, bumpers, lights and a Triceratops hunched in the corner, with a few smaller dinos on parts of the table here and there.

With discussion on how the table looks out of the way, just how does Jurassic Pinball play? Even if it’s not based off a real table, virtual pinball games can be fun, as Pinball FX3 proved and even ancient computer game pinball titles that were preinstalled. Unfortunately, Jurassic Pinball does neither of those, and is not only not a fun virtual pinball table, but a really, really boring one that seems to be made in this Unity asset. Not that assets that are available to use for commercial purposes to use are bad if used right, but there’s so many things wrong with how this table plays that it isn’t even funny.

For starters, every button on the controller save for the plus, minus and triggers tilts the table. This means it’s very easy to accidentally hit a D-pad button or face button to tilt it, and unlike most other pinball tables you don’t get three or more attempts before a tilt activates, you only get two, and waiting a few seconds resets the tilt timer entirely. If you do tilt a ball, the game can still keep going, and you get scored points for when it hits bumpers even as you lose total control, which is not how tilting in a real pinball works in the absolute slightest. 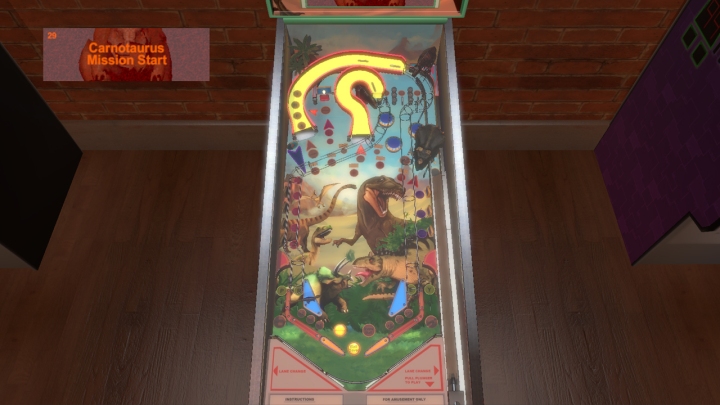 The next problem is that the physics are completely off and made in a way that makes the ball go way too fast for the silliest of reasons? Hit the ball with the flipper’s center? It shoots all the way to the right at super fast speed. This ball speed and trajectory issue outright cripples the entire experience, and after a few games of dealing with it and the dull table design I just couldn’t take it anymore.

For a $2 game, I didn’t expect too much from Jurassic Pinball, at the most expecting a fun, simplistic pinball experience like those pre-installed on old computers back in the day. Unfortunately, using a simple asset creator and not really making a table that accounts for the quirks of said creator just leads to this being a very rough experience, and while it does have online leaderboards with friend support, I can’t recommend this game in the slightest, even for those curious about Pinball titles. The saddest part of all is that in the background of this game’s title screen is a faux arcade machine for 99 Moves, a great entry in a fantastic series that I’d much rather play on my Switch over this dreadful experience. You’re better off sticking with the free to start Pinball options. I give Jurassic Pinball a 3 out of 10.