In this metroidvania adventure game, you take control of a student named Belle, who after screwing up a valuable recipe must embark on an expedition throughout the entire school in order to find all the ingredients needed to fix the brew and save herself from getting kicked out.

Continuing to use the standard tradition of a pixel art style, Mystik Belle sports such a style, only one akin to 16 bit graphics more so than the done-to-death NES graphics. While it’s certainly not as impressive looking as Shantae, (not having nearly as much animation for one thing, likely due to the different development team involved) the huge sprites do stand out, for better and for worse. More often than not, enemies will be so big that if you aren’t able to knock them out of your way they’ll deal a lot of damage to you in no time, especially if you’re dealing with a massive enemy such as a knight holding a shield. The music is moderately catchy, sounding akin to some retro computers like the Commodore line due to the echo-y nature and soundfont used, leading to the music sticking in my head for quite a while now.

Despite being a Metroidvania, Mystik Belle mostly focuses on some elements from point and click adventure games, not really focusing on the usual structure of hunting for an item or upgrade to access blocked doors. Rather, you typically progress by picking up the numerous items littered about the school and using them in appropriate situations to solve a problem and open up progression.

Along with this, you have a handy fire rod at your disposal to shoot fire balls at enemies when at a distance, and to swing at them when up close. While enemies do take a lot of hits with the projectile attack before death, the melee attack does a lot more damage and is more suitable for taking out basic enemies. Whenever an enemy is defeated, you do gain a little bit of experience, which gradually fills up and leveling up will cause your projectile weapon to grow in strength while also granting you more health, something that’s crucial once you begin to progress past the first area of the game, where enemies such as skeleton snake, armored knights and bats will deal a lot more damage to Belle, thus requiring that you either be ridiculously careful, or kill enemies over and over again to grind the EXP needed to get stronger, a process that isn’t too fun to take on, especially when death will lead to you losing all that EXP if you’re in a situation where resetting the current room won’t solve the problem. (Resetting the room will let you retain your EXP, but also your current HP, so if you were at 1 HP when entering a room then you’re basically screwed)

So while combat isn’t really that difficult, there is still some very frustrating moments early on in the game, before you’re able to level up much. For one thing, walking or falling through an enemy is an absolutely terrible idea, as doing so will lead to the enemy shredding through your health bar with barely any invincibility frames to keep you safe, and this makes dealing with armored enemies a gigantic pain, along with any enemies that fly around in vertical rooms. 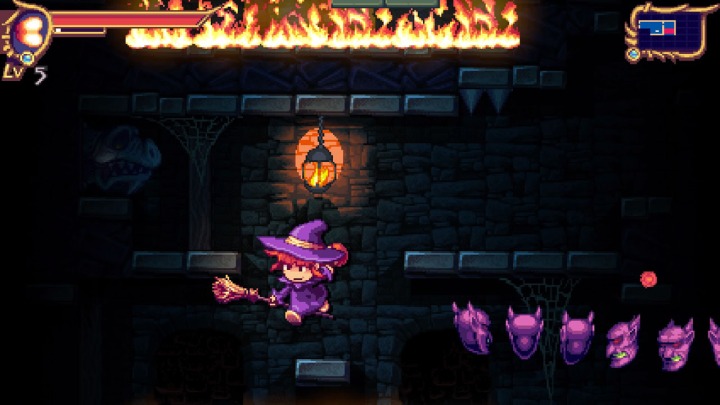 Last but not least, the biggest issue that led to me becoming unable to really get into the game despite my efforts over the past few months, and that’s the adventure elements. Sure, finding plant killers to kill a plant or giving items to NPCs to progress doesn’t sound too bad, but as you progress through the game the items you get won’t be used for puzzles much later on, even if some of them seem like they should work earlier. (Such as trying to use a crowbar to force a drawbridge lift to activate, which doesn’t actually work as you need something else instead) In fact, there’s even some items that are absolutely worthless, meant to be recycled in a recycling bin. Thankfully you can’t accidentally recycle important items, but it does make me wonder why the game bothers to trick the player with dummy items. Another thing that adds to the annoyance comes from the limited inventory space, which requires you to stuff certain items into a deposit chest that appears throughout the school, usually in rooms where you need to use an item to progress. Why they bother putting a chest in rooms with puzzles instead of just letting the player carry everything bewilders me, but more often than not I would have to backtrack just a room or two to deposit a random item in order to pick up a new one.

In conclusion, Mystik Belle tries to merge classic adventure elements with the metroidvania formula, but it just doesn’t turn out well at all. In a way, this game ends up feeling a lot like a guide game, and while it’s not something you’ll need to stop and look at a guide every 30 seconds or so, it will be something you’ll need when wandering around the castle, searching for the purpose of an item you collected or what item will allow you to solve a puzzle you just can’t figure out. When I first played a bit of this for the Seafoam Gaming youtube channel, I was convinced it wasn’t gonna be as dull as it was, since the soundtrack is fantastic and the game does have a fun sense of humor along with good map design, but when the core game and main gimmick just doesn’t work well at all and seems like a poor attempt at artificial padding, I just can’t really get behind Belle’s adventure that much.