Thanks to Alpha-Unit for the review code

In this arcade-inspired action game, you take control of a cute furry fox named Tira, who along with her new mitten friend, Mitton embark on a quest to discover pieces of a recipe in order to make the best treat ever, all while having to avoid a treasure hunter who also has the recipe in mind to help build his own golems…

Visually, Whip Whip goes for an eight-bit visual style, the kind that usually tends to focus heavily on the NES era of gaming, and has thus fueled my many complaints on how they barely go for other consoles to use as inspiration. Luckily, Whip Whip is not yet another NES-inspired eight bit game, but rather one that appears to use the bright colors of the Neo Geo Pocket Color, almost to the point that the game looks exactly like a title from that system. The backgrounds are usually plain, and like with Bubble Bobble some stages form shapes, but overall the game’s pixel art looks quite gorgeous.

The music is also cheery and upbeat, although it doesn’t sound anywhere close to 8-bit, going for what sounds like a soundtrack you’d hear in a 90s Arcade title instead, plus there’s only a few world themes in the entire game, leading to recycled tracks during the ten world adventure. Still, what’s here is very nice, and the sound effects get the job done as well, even though like with the BGM they’re also not in 8-bit, leading a mix of arcade sound design and Neo Geo Pocket Color visuals.

The main goal of the game it to clear each of the 100 stages, split across ten worlds containing 10 stages each. The controls are incredibly simple, with the left stick being used to move Tira around and aim her glove when attacking with the B button. You can also jump with the A button, and outside of that simple two-button setup the game is very easy to get the grasp of. By default, your movement and attack speeds are absolutely terrible, and you need to defeat enemies in order to gain powerups to improve your character. 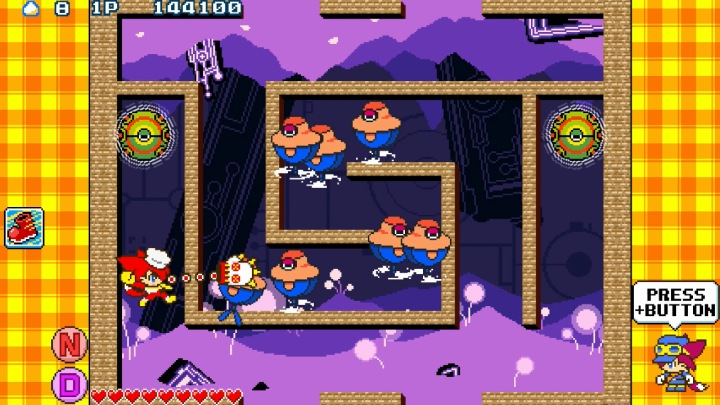 Luckily, this is incredibly easy once you get used to the game’s method of taking out enemies with your mitten. Simply launch it at an enemy, press the attack button again, and then you’ll do a flying kick towards the enemy that will finish it off. If surrounding enemies are hit by the kick, you’ll do a small bounce off of each of them and rack up a score combo, which in turn will increase the chances of special EXTEND Balloons flying up from the bottom of the screen. Collect one balloon of each letter and you’ll get three extra units of health, which comes in handy when dealing with the trickier stages of the game where enemies have limited weak points and waiting for them to be exposed is key. Defeated enemies also drop off treats that provide a wide variety of points, and clearing the screen of all enemies and treats will move you onto the next level.

Despite a very enjoyable start and a formula that works well for some great arcade goodness, there are a few faults in Whip Whip that can make the experience sour at certain points, by far the most frustrating one being the boss of World 5/Level 50. This boss is a rotating machine that opens up and fires a laser in certain directions, starting from one direction, moving to two directions, and then from four directions. How you defeat this boss is by attaching and kicking the core in the center of the machine three times to destroy it, but the problem here is that the hit detection on the boss’s final form is just abysmal. Many times when I tried to attack the weak spot by latching on and attacking, I would bump against the spiky corners of the boss while doing so, interrupting my attack and causing the boss to repeat the cycle due to me taking too long to injure him. Despite my best efforts, it was stupidly difficult to land the final hit despite the first two hits being fairly easy. The only way I could actually beat him that I found was by abusing invincibility frames and mashing the attack button during that brief window to jump kick through his body from underneath and destroy him, which felt like something that I shouldn’t have had to do.

Outside of that awful boss, the rest of the game feels fairly standard for an arcade inspired game, and you’re even free to adjust the settings to make the game crazy hard or a lot easier by giving your character extra health and a fully powered up state from the beginning. Since you can easily jump back in the last stage you were on, there’s almost no penalty for dying outside of a score reset, which may make this game seem short and easy, and in all honesty it pretty much is. The 100 levels are over in just under two hours once you grasp the controls, and there’s little reason to replay them outside of having a buddy tag along for the two player co-op. Another interesting thing to note is that if you manage to clear either challenge mode or the main mode with two players, you’ll get a better ending, akin to how the Arcade Bubble Bobble handled it.

Luckily, the game does open up a challenge mode for hi-score chasers to engage in after clearing the main adventure, which makes this experience even more like an actual arcade game by giving you no access to the options that you had in the main game, forcing you to use the default moving speed, health bar and relying on powerups and skill to survive as long as you can from the very beginning of the game to the very end like a gauntlet. This is a timed mode, but considering how this is far more difficult than playing the game normally this is more preferred to be something done for the sake of hi-scores than anything else, especially since boss 50 isn’t changed in the slightest, unfortunately.

In conclusion, Whip Whip is an incredibly fun arcade throwback that’s likely to head under the radar, but it really shouldn’t be ignored. With a good amount of customization for the main game so that anyone can get the grasp of the mechanics, an enjoyable score-chaser mode after clearing the main story, and two player co-op, this is an arcade throwback that manages to hit all the right notes, cute furry protagonist aside. It may seem a bit steep at $10 with only 100 levels and with a focus on score-attack once you beat the game, but those 100 levels are insanely enjoyable, and if you’re a high score junkie like myself then that price is easily worth the solid experience you’re getting with this game, despite that one boss that drove me nuts. This is very likely to be a hidden gem on the Switch eShop, but hopefully this review will help you go out and prevent it from becoming such, as this is truly a fun game that’s a great fit for the switch’s local co-op features.