Thanks to Fabraz for the review code

A magical sphere falls from the sky and lands on Earth, with the ability to grand wishes for those who wield it! Each with a wish in mind, several heroes set out to take it back from the reawakened Baphomet!

Heavily inspired by the color palette of the Game Boy Color, Spiritsphere DX goes for a very colorful pixel art look, to the point that one of the characters and her stage (A dungeon-like area) looks almost ripped out of one of the GBC Zelda titles. Luckily, you don’t have to deal with a cramped screen as a result, and the game looks really nice with simple menus as a bonus. There’s not much in terms of music, with a mix of 8-Bit and arranged tracks thrown in, but what’s here is also solid.

The gameplay of SpiritSphere DX is pretty much identical to tennis in some ways, mainly in how the point of a match is to reach a certain score threshold before your opponent does. The controls are easy to grasp, with the Y button being used for a normal attack, B for swift dashes, and A for a charge attack, all to aid in helping you volley the ball back and forth until it goes into one of the two goals. 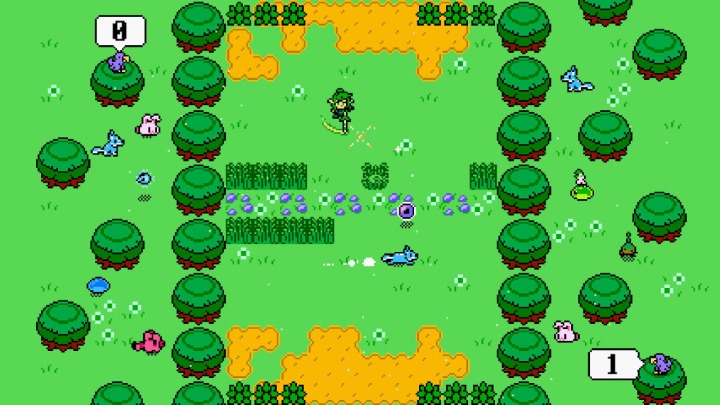 The main focus of the game if you’re going solo is the campaign mode, where each of the eight main characters go through ten rounds fighting against other foes in order to reach Baphomet and take the sphere back from him, with the game modes changing up during the ten rounds, switching from the normal pong-like action to a game of squash, (take turns rebounding against the front wall and have it hit the back one to score) frisbee tossing and even a Target Smash mode. Items can be thrown in the mix as well, but they don’t really seem to do much outside of stunning your opponents. From the start you don’t have that many characters available, with only three to choose from. Still, clearing the campaign mode on either of the three difficulties will reward you with tons of coins, even more if you go for the hardest settings, which are used for donating to the in-game spring to unlock a variety of things, from new characters, skins, balls, and more balls, each for 100 coins.

Unfortunately, the absolute worst part of this game comes from the fountain, and that’s because of how focused on dumb luck it is. Many, many times I found myself spending 2K coins after spending 5 or 10 minutes in a campaign only to get duplicates of ball after ball after ball, with an occasional new skin for characters I owned. No matter how hard I tried, even after getting 34/46 of the rewards, I still had three characters locked and the rising risk of duplicate items just made unlocking this way not fun in the slightest, especially when you run out of characters to play the campaign mode with, thus having to redo it as a character you already beat it with in order to get anything done. All this for a chance at unlocking a new character didn’t feel right at all, and I felt there should have been way more characters than there were balls, and that’s even after being very well aware that the balls do different things (such as one that gives you two points over one, a ball that splits into many balls you all have to keep track of, a giant ball, etc etc)

Another annoyance comes from how as a result of the small roster, many times you’ll fight the same opponents in a row during the same campaign. In fact, I even fought against the same opponent twice in a row because it didn’t bother to pick someone I had yet to fight. (Baphomet is always the tenth and final stage, so obviously he won’t be randomly picked) While the core gameplay is still tons of fun, this can make the single player somewhat repetitive despite how much the game tries to add variety by including the different modes in the campaign. In fact, the only modes it doesn’t add are the head-to-head mode (Using the Switch in vertical mode and using the two connected joycons to play at the same time in handheld mode) and the Boss Mode. (where player one controls Baphomet’s Ultimate Form and Players two and three control two normal characters to try and take him down together, a reverse Dramatic Battle in a way)

Still, if you want to play with your friends there are a ton of modes on offer as well, from 2V2 modes, the standard back and forth, and the squash mode, although these are all done locally, which works great with the Switch’s handheld nature, but also makes it a bit of a bummer since the lack of online could make this game appear very light on content to those without any real life people to face.

In conclusion, SpiritSphere DX is a pretty looking take on the Pong formula, with several fun modes to play and an enjoyable campaign when the repeat characters aren’t as obvious. This game is especially a blast to play in multiplayer and fun for that reason alone, but the horrible unlock system, the overwhelming amount of balls and the risk of duplicates make unlocking more stuff in the game less fun than it should be, and in the end I just found SpiritSphere DX to wear off quicker than I would have liked. If the way of unlocking characters wasn’t based on grinding and RNG, I’d be able to at least appreciate it much more, and if the lack of online multiplayer or leaderboards of some kind is a bummer. Still, if you don’t care much for the unlocking aspect, you still have a great game to enjoy with friends to look forward to, but not much else.