Thanks to Four Horses for the review code

In this sequel to Kid Tripp, you take control of Miles once again, who along with his dog Kilo are attacked and crash land on a mysterious island. With all their plane parts stolen by the wildlife, the two must team up and explore the terrain in order to rebuild their plane and get out of there!

While using a 8-bit visual style just like Kid Tripp did, Miles and Kilo significantly improves the presentation by fixing most of the problems I had with Kid Tripp’s visual design. The screen isn’t cramped anymore, the pixel art looks a lot more inspired and colorful than the basic blandness from Kid Tripp, and there’s also a lot more animation here as well. The world map looks significantly better, in that there’s actual color and you can freely move between levels you already cleared at will. 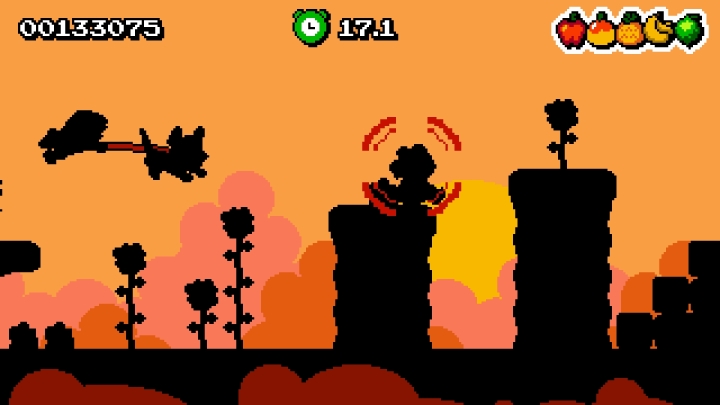 Like with Kid Tripp, the main point of a level is to go from point A to point B, reaching the end of the stage while collecting as many coins as possible. The biggest change by far, however comes from a huge improvement that makes the game a lot easier to play; autorunning is no longer mandatory. Yes, the main method of control is by using the d-buttons or left stick, along with your jump and throw buttons. This makes levels a lot easier to control by default, but autorunning is still thrown at you every now and then in the form of Kilo, the dog.

Kilo levels control a lot better than autorun levels in Kid Tripp ever did, with the level design being much better suited for autorunning than in the other game. Kilo automatically runs to the right, and stops when he comes into contact with walls. You can jump like normal, but doing an attack will cause him to roll along the ground, knocking out any enemies in his path. Doing this in mid-air will lead to a homing attack, which can be held down for a longer jump in order to collect goodies.

When you reach the end of a world, there’s a boss battle for you to take on, either as Miles or Kilo depending on the situation. Miles’ boss battles require a lot of strict timing and punching them up close at the right moment, while taking out enemies with your fruit supply in the meantime. Kilo’s boss battles are much easier to grasp, just requiring that you dodge hazards and homing attack the boss when you get close enough. No matter what level you choose to embark on, the length of the stages still remain universally short enough that they’re easy to clear with some practice.

Clearing a stage will reward you with a rank depending on what if you have all the fruit, coins and if you cleared the stage in a fast enough time, starting from C to S rank. These ranks don’t really do much outside of unlocking some in-game achievements, (which are back from Tripp and are still as fun to obtain, with a few clever ones) but they offer a good incentive to retry a stage and better your runs.

In conclusion, Miles and Kilo is exactly what a sequel should be. While Kid Tripp was a dull, somewhat generic and mediocre runner, Miles and Kilo is significantly improved and a lot more care clearly went into this one. In fact, when you turn the autorun on for the Miles stages, even those levels manage to be more fun than the levels from Kid Tripp, which were made specifically with autorun in mind, and goes to show how better level design can significantly improve a game. Combine that with some in-game achievements, an unlockable time attack mode, and going for S-ranks, and you do get your value for eight dollars. While beating the stages normally won’t take too long at all, the extra replay value from bettering your attempts and going after the achievements make the experience worth it, even if you didn’t care for the first game that much. Here’s hoping this doesn’t become yet another hidden gem on the Switch eShop, as Miles and Kilo certainly surprised me more than I expected.