Thanks to Two Tribes for the review code

In this enhanced port of the 2013 Wii U eShop game, you take control of Toki Tori on his second quest to save his relatives, after a mysterious black mist erupts through all the land. Annoyingly, the game has no dialogue or text in the slightest, nor any cute cutscenes akin to the first game on GBC. In fact, due to the lack of a title screen or really anything of the sort, the game’s story and the way it’s presented comes off as a pretty lame attempt to be overly simplistic.

Continuing to use a similar 3D art style to the remake of the first Toki Tori, Toki Tori 2+ puts a huge focus on the environments, with some areas looking absolutely stunning and gorgeous, with stellar usage of lighting and Toki Tori reacting accordingly to changes in lighting or getting stuck, bringing back some of the charm of the GBC original. This is a great touch that helps the game world feels alive, although it does bring to light the baffling lack of a UI or any sort of menu screen to speak of. Outside of a basic guide to your limited movepool, the game just starts or resumes right where you left off, leaving the menus to only be accessible via the pause screen. Likewise, there’s little in terms of memorable music, with most of it feeling like forgettable background noise.

After going from the fantastic yet tricky puzzler on the Game Boy Color to a decent 2.5D remake, Toki Tori 2 throws all of the familiar mechanics out the window. That means no more screen-by-screen puzzle solving, no more egg collection, and none of the cleverness as before. Rather, Toki Tori 2‘s a Metroidvania, but in a very loose sense of the word. While you can freely explore and take advantage of multiple paths if you can solve the puzzles blocking those paths, there’s not much in terms of upgrades save for new songs that Toki Tori can tweet out, usually taught to the player via visuals, but if you remember them from previous playthroughs like I did, or look them up online, you can actually use them early. These songs do basic things such as finding collectibles, bringing up the world map, fast-traveling at checkpoints, using the camera (more on that later) and a song that lets you die on command.

Besides tweeting out notes to play songs, your tweets can draw attention to the nearby creatures, alerting them to your location. The only other option you have to manipulate the environment is by stomping the ground, which can knock smaller creatures from a nearby platform off or cause things to fall. The entirety of Toki Tori 2’s level design revolves around using the two techniques to solve puzzles, whether it would involve going from point A to point B, disabling deadly lasers, getting captured by a bigger bird to reach higher places, (or get sent back if the bird wants to annoy you to death) or clearing the path. 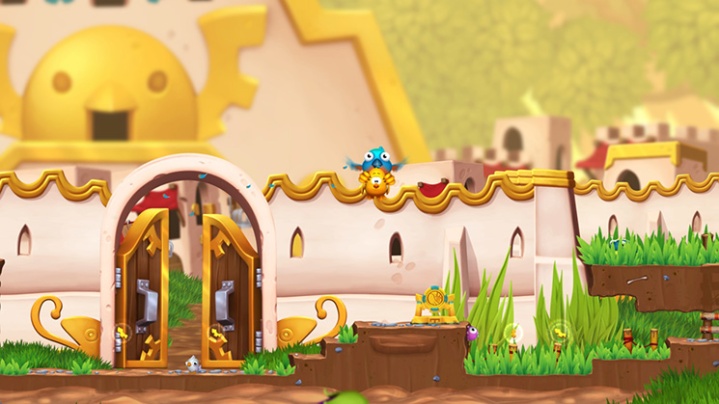 During the start of the game, these puzzles do their job and manage to be decently entertaining, providing satisfaction as you continue to work your way to the next checkpoint and discovering more of the world. Like with the first game, however these puzzles can get beyond tricky and hair-pulling, which means that unfortunately the aforementioned lack of dialogue or any sort of hints comes off as very irritating and may require looking at a guide after a while, moreso than the first game since in that one it was more detailed and easier to figure out what the solution could be.

With all that said, however, there’s one aspect of the game that remains as stellar as ever, and that’s the Tokidex. Using a special song to summon a camera, taking pictures of any creature or interesting monument you come across will log it in a database that contains every object and creature in the game. This leads to a lot of fun hunting down new creatures and artifacts and taking a quick picture, and I feel that this element of hunting down things for the Tokidex is where the metroidvania elements are at their absolute best. Along with the Tokidex, all the achievements from the Steam Version of the game is in place as well, following the tradition that RIVE established. Unfortunately, despite the Wii U version being hyped up with a level editor that was ditched out of the blue in favor of a Steam version, the Switch port STILL lacks this editor that was promised for the Wii U original.

Considering the other minor quality of life changes such as HD Rumble and the aforementioned achievements, along with the + version addictions that was originally an update for the Wii U version being built right in, this exclusion is beyond frustrating and confusing. Granted, it doesn’t seem to be that popular on Steam to begin with so the devs might have seen it as a feature not worth adding, but considering how the Wii U version had this feature promised for a while before it couldn’t be added, it would have been awesome if the Switch port added the editor, as it could have very well have been the definitive and ultimate version of this game.

In conclusion, Toki Tori 2+ is still as mediocre as it was back on the Wii U and Steam. While the Tokidex is a fantastic feature and the best part of the entire game, along with a beautiful series of setpieces and backgrounds along with some clever puzzles, the game feels like a bland drag after a while, the lack of a title screen or really any sort of cute cutscenes/dialogue and the shift in gameplay mechanics does feel rather jarring as someone who was a huge fan of the GBC original. The HD Rumble and in-game achievements are fantastic additions that make this better than the Wii U original, but nowhere near as robust as the Steam version, which includes a Level Editor that continues to be absent. Considering how this was the game that seems to have killed the Toki Tori series for good, it’s a huge shame this is how the series ended, as the good aspects are really freaking stellar, but some of the lamer aspects are still as unimpressive as ever and continue to disappoint, and even some minor QOL tweaks can’t seem to save the game.