Thanks to Spike Chunsoft for the review code

In this tower defense game made by the creators behind the Starfox series and the Gameboy showcase X, you take control of Tikiman, a leader who must protect his village and several others from invaders who are after the Chibis of his tribe!

This game gets hug praise from me for being one of the most gorgeous video games I’ve ever played, hands down. The entire world has a look and feel to it that comes off as if the world was made with clay and paper mache, with extreme detail on all the models and environments is one thing, but offering two different POVs that manage to retain this detail, with the second one being one that increases it even more (where it goes from an overhead perspective to a third person view) all thanks to how lovely the game due to the closer perspective, despite it being pretty pointless for actual control.

The soundtrack’s pretty good too, from a soothing world map theme to slow and steady stage themes, along with a menacing theme for when boss Golems come onto the field.

The main goal of PixelJunk Monsters 2 is to go through each stage across the five different worlds and protect the Chibi Home from invading enemies by taking them out on sight. This is done by scavenging for gold and gems in order to build land and air weapons to take out the invaders, who drop more gold and gems upon defeat. Since each stage has its own layout, the amount of available trees and resources to convert into weapons vary, which means that depending on the stage you may need to dismantle previously built weapons to fund them in a different part of the map, or to build the opposite type of weapon to take on the current wave, since ground weapons will be ineffective against flying enemies and vice versa, unless you build an all-range weapon such as a Bow and Arrow, which is weaker damage wise but damages both types of enemies. At any point during a stage, you can shift to a third person perspective with the R2 button, and while the game looks a lot prettier this way, I found building things to be a lot more cumbersome in this perspective. 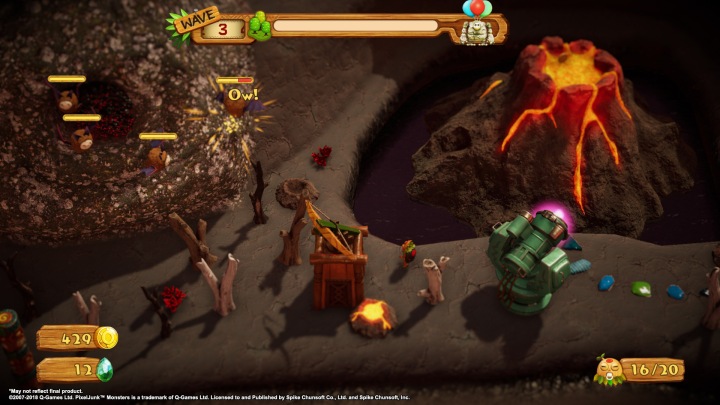 Once your weapons are built, you can choose to upgrade them using the green gems that can be found from defeated enemies or dismantled weapons, or by simply staying in place underneath a built weapon. Doing this will cause Tikiman to do a dance that’ll gradually fill up the wheel. Weapons firing and defeating enemies will also provide the same effect, and the higher the level, the more damage a weapon deals. If you save up enough gems and coins however, you can get even stronger weapons than the standard three, including an electrical beam among others, and those are upgradable too. Your Tikiman can jump and do a very, very weak attack on enemies if you time it right, but it’s not really worth the effort to try that.

After clearing several waves in a row, a boss Golem will be sent out, with tons of health points and higher defense than the standard grunts. This final wave requires you to go all out to defeat the boss before it reaches your base, since if a boss reaches your base they’ll continue to relentlessly attack and kill your chibis instead of dying upon killing one of them. Still, if you manage to overcome this tricky feat and clear an entire stage without losing as single chibi, you’ll be rewarded with a rainbow fragment, which is what you need in order to unlock the next few worlds. Clearing a stage normally will unlock the next stage in that world along with a higher difficulty option for the level you cleared, starting from the Fun difficulty setting and going higher from there.

When the game gets in a good rhythm, PJM2 can be a lot of fun, although the very strict room for error even on the easiest setting can be a big turn off. This is where purchasing items can help with, since in some stages you’re able to find a shopkeeper who can give you berries that cause a variety of effects on enemies upon contact. Sometimes you can even find them in certain stages, which can come in handy if you need to distract or damage an enemy and don’t have a strong enough weapon in hand. You can also spend silver medals obtained from beating stages normally in order to buy shells and masks for Tikiman to wear, allowing you to give him cosmetic changes if you so desire.

In conclusion, Pixeljunk Monsters 2 is a tower defense game with a stunning presentation and a good flow, although the difficulty level is quite high. Not hairpulling by any means, but it will take a few tries to get all the rainbow fragments you need to press, and some stages can be very tough to even beat normally. There is local and online co-op for you to try out if you get stuck on a stage, although unfortunately I was unable to test this mode for the review, due to the online lobbies being completely empty every single time I tried to look for matches and not having anyone to play with locally.

Still, this game’s presentation should be a major selling point alone, and there’s a free demo on the PSN if you’d like to try before you buy. Like with all PS4 games, there’s a trophy list to tackle, and this one has a platinum, although these trophies are quite basic and don’t amount to much beside 100%ing the game or repeating tasks over and over again, so I wasn’t really able to get any during my time with the game. Despite the gorgeous visuals, I wasn’t really fully-hooked into the game as I would have liked due to the high barrier for entry, but maybe when I’m able to have a co-op partner I can finally make some major progress.