Thanks to ATLUS for the review code

When a dangerous hole of dark energy opens up in the sky out of the blue, a team of investigators head to the source in order to find the cause behind it. Known as the Schwarzwelt, this dark world is filled with monsters and demons, incredibly dangerous and capable of taking out any who enter. With you and your crewmates as one of the few to survive the trip inside, you must find a way to remove it before it destroys the earth for good! Interestingly, despite being a first person dungeon RPG, there’s multiple choice options not unlike a visual novel, which can influence how certain events play out and thus allow for different endings.

Being a remake of the DS original, SMT Strange Journey mixes 2D sprite art, 3D environments, and 2D character portraits together, now with standard improvements thanks to the increased power of the 3DS with everything using much cleaner assets along with full Japanese voice acting. The music in this game is also top notch, and believe it or not, Redux OST is pretty much identical to the DS OST in terms of sound quality, and even the new tracks that relate to the new dungeon and character fit in perfectly, not coming across as a sudden deviation from the norm (although the new dungeon’s theme ended up being something I preferred to listen to more than the standard area themes due to how dreary they sounded in comparison)

Shin Megami Tensei is known for being a first person dungeon crawler, a genre I have dealt with many times before, usually with unimpressive results or nothing out of the ordinary save for gems such as Etrian Odyssey V. As per the norm, your main goal is to explore every nook and cranny of a dungeon, defeating enemies in random encounters and leveling up to learn more skills and stats. However, SMT Strange Journey doesn’t focus on mapping out your surroundings at all, with everything automapping on the bottom screen, making this a pretty standard map with little interaction, something I honestly don’t mind considering how SJ focuses more on combat than anything else.

When starting the game, you can choose between three difficulty levels that can be switched between at any time, following in more modern RPG traditions. The casual difficulty has all the enemies deal little damage to the player, making it much easier to blaze through the game or get a start on recruiting demons, (more on that in a bit) the normal difficulty balances things out for a moderate challenge, while the hard difficulty option makes all the enemies hit like a tank, even the ones in the first sector of the Schwarzwelt, and requires that you must put your full effort into each and every single battle if you have hopes of survival. Once you find a difficulty level that fits your personal preference, it’s off to exploring the first sector after a bunch of plot. Yes, an engrossing plot is to be expected from a RPG, but this game can have a ridiculous start to it depending on what type of player you are, since the first thirty minutes was nothing but plot and dialogue building up the trip into the Schwarzwelt and introducing the basic mechanics of the Demonica Suit. (A yellow robot suit the main character wears that gives off Super Sentai vibes) Once that’s out of the way though, the game goes off without a hitch, and returning to your ship of operations to check in on your crewmates won’t feel nearly as tedious at that first time.

Upon exploring the first sector of the Schwarzwelt for a short while, the main feature of the Demonica Suit is introduced, that being the ability to communicate with the enemy demons that will attack you in the dungeon. Depending on if your level is higher than the demon in question along with your current alignment, you’ll be able to communicate and work your way towards a negotiation with it, usually by answering a series of questions that will make the demon trust you, before accepting every request that it makes, from wanting specific items to draining some of your HP and MP. If you manage to do all these and satisfy the demon, while making sure that your level is above that of the demon, then it’ll join your team as a party member! This signature SMT staple is essential to expanding your party, since going solo won’t work well in your favor, especially since Demons can do a lot more than the main character thanks to the huge pool of skills available for them, along with the variety of demons with their own movelists to raise. Some are healers, some use elemental magic, some are physical attackers, and some are a mix, it all depends on the demon, and they all have their own strengths and weaknesses to different types of attacks, too.

While you and your team of demons can learn new skills over the course of the journey through traditional level up, the way these skills kick in is a bit different from the standard RPG fare, since your demons will let you know that one of their skills is about to mutate. When a skill mutates, it pretty much swaps out the current skill with an entirely different one, which is up to the player to decide if the new skill would be an upgrade or a downgrade in comparison. Another, much more reliable way of gaining new skills is by fusing two demons in your party together to create a brand new one with new skills being learned along with the option to carry over skills from the demons being fused. Depending on which pairings you choose, these fusions can be incredibly useful (allowing a demon to have a ton of skills to choose from compared to a freshly recruited one of the same species) or pretty bad. (if your good demon ends up weaker than before) Like with recruiting new demons, you can’t fuse two demons together if the final result would be at a higher level than your main character, so you’ll have to catch up if you see a really good demon that would be several levels above you, and if you’re particularly proud of a demon you can even share it through a password! (Although the other player will have to spend a lot of Macca in order to recruit it, since you can easily abuse this to recruit some overpowered demons from the beginning of the game if you grind for enough macca.) 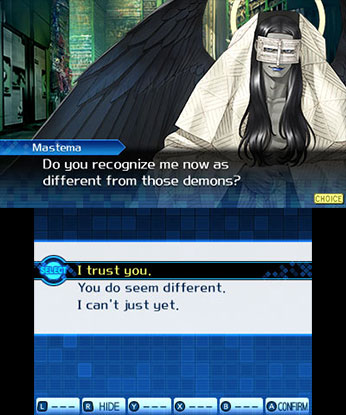 Traversing through the sectors of the Schwarzwelt and progressing the plot, you’ll occasionally be given multiple options to choose from if an NPC asks for your input. These impact the alignment system, which as mentioned before is what leads to certain demons being more or less willing to join you, and it can also impact the ending. For the most part, it doesn’t really matter in the early game unless you want a certain demon in mind, but if you build a team consisting of demons with the same alignment, then your demons will jump in to do an additional Co-Op attack from time to time, so good team building is important to experiment with. Another thing that is introduced to you halfway through the first sector is gathering materials known as forma, which randomly pop up on your map and can be gathered by walking over the indicated spots. Once gathered, taking this back to your ship will allow for the technician to create upgrades and items for your Demonica suit, so hunting down every bit you come across if recommended.

Last but not least, one of the biggest new additions to the Redux version of the game is a new dungeon known as the Womb of Despair, a dungeon you’re introduced to in the second sector of the game, filled with enemies that are fantastic for level grinding due to them being tougher than the standard enemies of the normal sector. This dungeon also relates to a dangerously powerful human antagonist known as Alex, that you must watch out for on your return visits to the place as you progress and gain more upgrades to unlock the higher security doors that’ll block off parts of it on your first visit. (so you can’t go to the end of this dungeon until you progress much further in the story)

In conclusion, I was pleasantly surprised that as a newcomer to the SMT series, Strange Journey Redux offered a very comfortable way to ease myself into the franchise, playing like a standard RPG with the monster taming elements the series is known for, while also providing multiple difficulty levels and multiple choices that leads to different story events, along with EX missions to take on if you want to work on sidequests for helpful items.

Despite the 3DS being on the way out and how this remake was released late in the system’s life, (like how the original Strange Journey was released right around the 3DS launch) this is still one damn good RPG worth checking out if you have a 3DS to play it on, even if you’re a newcomer to the SMT series like me, or if you’re a hardcore veteran wanting a challenging experience, both types of players will be happy with how this game turned out, and playing this game makes me even more excited for the upcoming fifth entry in the SMT series.

I give Shin Megami Tensei: Strange Journey Redux an 8 out of 10.