Thanks to Chorus Worldwide Games for the review code

In this autoscrolling isometric adventure, you take control of the titular Videokid, who must skate through a neighborhood that’s the living embodiment of fanfiction.net while avoiding all sorts of not-ripoffs of popular 80’s trends, delivering bootleg videotapes all to meet up with his girlfriend Jessica at a park. A simplistic story with room for some silly interpretations.

Going for an isometric perspective as a throwback to Paperboy, while using voxel art surrounded by a thin TV border, Videokid starts up with only a basic introduction and a still image for its title screen, before you’re thrown right into the game. There’s no menus to be found from that point forward, not even a pause menu or a way to exit back to the title screen that I was able to find, since dying sends you back to a screen that counts your score total and only allows you to retry the game or enter a shop to purchase costumes and skills. The only real thing of note to take from the visuals comes from the sheer amount of references to franchises popular in the 80’s, with so many parodies and outright copies of characters from Peanuts, Doctor Who, Ducktales, Roger Rabbit, Transformers, TMNT and more to the point that it can feel like the game’s trying way too hard to overflow you with nostalgia rather than present a game with unique setpieces. 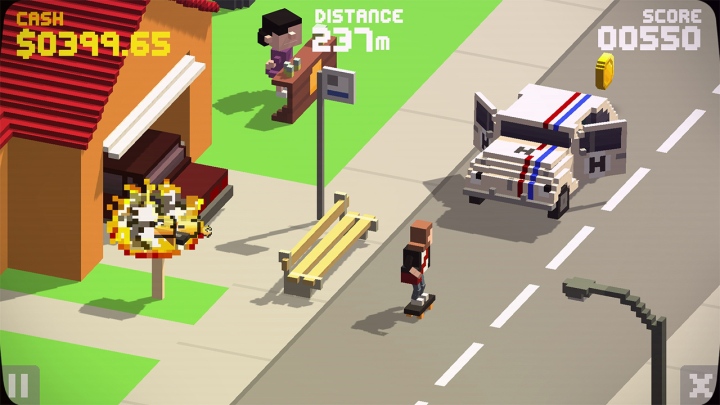 The music isn’t worth really mentioning, since it’s just a few repetitive loops on end, although the aforementioned “cameos” have a habit of talking or repeating the same lines anytime they come on screen, which can get really irritating after multiple attempts since the core layout of the game doesn’t really change all that much.

The controls in Videokid are simple, and are explained in a one-time tutorial that never appears again after you go through it. You can jump with either the A button or by pressing the Up D-Button, and throw an endless supply of VHS tapes with the B button. You can move from three different lanes by pressing the left or right D-Buttons, and the main goal is to avoid every obstacle and make it as far as you can without dying, all while trying to score points by throwing videotapes and collecting coins. It’s a very simple control scheme that would lead to a simple arcade experience if it wasn’t for some unfortunate flaws. 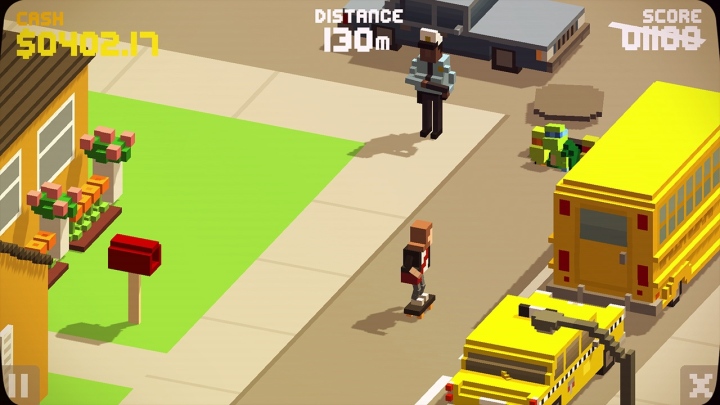 The biggest of them that I constantly dealt with was the isometric perspective, as more times than I could count most of my deaths felt like they came from jumps that I should have made, only to brush against some part of a car or bench that the game didn’t want me to ride on, causing me to act as if I crashed straight into it. Even in handheld mode, judging distance at times was stupidly difficult, and that doesn’t even count the occasional time where an obstacle flat out came out of nowhere with almost no time to react, the worst kind of obstacle being a police car that would just shoot behind you out of the blue if you stay in the right lane, with no prior warning. 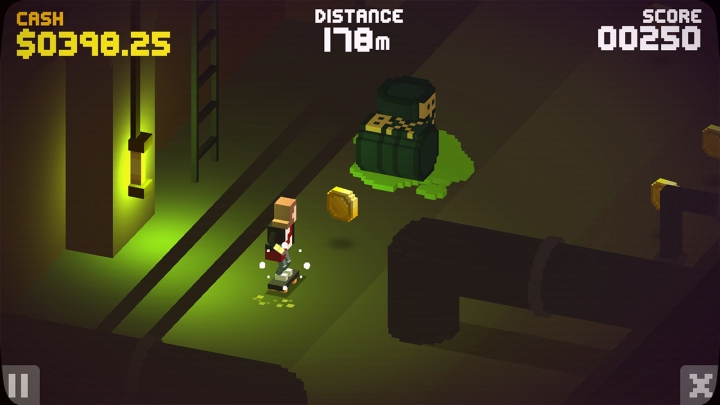 Once you get the basic rhythm and layouts down though, you can have a decent time with the game, since dodging most hazards by switching lanes isn’t that difficult. Rather, it’s whenever you need to jump over a hazard that the depth perception can cause your demise. While each attempt of the game does shake up the order in which some obstacles can appear, the core layout of the entire game remains exactly the same, in that you start from your home, pass by a few obstacles, and then enter a sewer section and avoid an alligator before moving onto a section where Space Invaders or Pac-Man wannabes can be taken out with VHS tapes, before moving onto another sewer section and so on. Unfortunately, this means that while the game isn’t 100% random, it’s not something you can easily memorize, either since not everything is an exact copy, but it’s not different enough either. 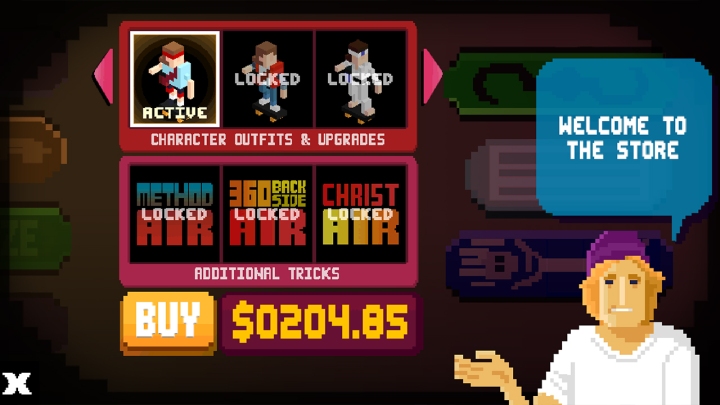 This issue wouldn’t be so bad if it wasn’t for one huge sin this game commits that I just can’t grasp in the slightest, especially considering how it’s a throwback to Arcade games and a scorechaser; there’s no high score saving. There aren’t any local or online leaderboards, either, and the only thing that’s saved when a run ends are the amount of coins you gathered throughout that run, which can be added up to purchase cosmetic costumes based off of more 80’s references, or tricks that you can perform while jumping. There’s no excuse whatsoever for the lack of at least a high score at the top of the screen that you can choose to chase if you so desire, and if for some reason it’s locked behind reaching the end of the gauntlet of obstacles and meeting Jessica, (which I have yet to do, only making it 74% of the way despite many attempts so far) then that would be equally as baffling, although I honestly doubt that a basic feature such as your highest score would be locked behind completing the game, when that sort of thing seems like it would end up saving your fastest time instead.

In conclusion, Videokid is a clean looking game that has a nice rhythm to it, but is bogged down by issues stemming from both the isometric perspective of the game and the lack of much randomness. The biggest issue of all that I found absolutely inexcusable however, was the aforementioned lack of a high score list, even a local one, which makes zero sense considering the era this game is paying tribute to, and would at least have helped add some replay value to this game outside of unlocking all of the costumes and making it to the end of the road. It’s a shame, since despite the overload of references that gets downright absurd, I did have some fun with this game, even though there were plenty of frustrating moments from both getting used to the clunky perspective while also dealing with the problems such an angle can introduce.