Thanks to XSEED Games for the review code

In this odd visual novel/tech demo/massage hybrid, you spend time in a classroom with one of the main characters from Senran Kagura, Asuka, helping her relax to the point of helping her daydream. That’s literally as much plot as you’ll get with this game, and even if this is your first Senran Kagura game like it was for me, (the series is primarily known for being a belt scroller, before going with spinoff after spinoff in recent years) not having a familiarity with the series doesn’t impact the relationship with Asuka, so you don’t have to worry about her referencing or asking about events from games you may have not played.

Since this game focuses on visual novel elements and has little else to offer, the presentation is the main aspect of Senran Kagura Reflexions. The visuals look decent enough, presented from a first person perspective with easy to read text, and there are plenty of unlockable customization options for Askua, allowing you to change the color of her clothes and put on a variety of different outfits to your liking in the free play mode. The closeup segments where you get to massage and grab at her body is… Beyond bizarre, to say the least. Goofy at best, questionable at worst, but it at least doesn’t look like anything bothersome in the slightest and this game never gets outright explicit, even though it can be a bit suggestive.

There’s also a range of music tracks, the majority of which go along perfectly with the game’s theme of relaxation, and are gradually unlocked as you progress through the main scenario and help Asuka enter more fantasies. You can also change the main menu theme to one of the unlocked themes if you so desire.

The main goal of Senran Kagura Reflexions is to fill up a vial over the course of many sessions with Asuka in order to make the most of your time with her. Thus, you’ll have to complete sessions one after the other, starting off by rubbing her hands with the joy-cons and then moving into a fantasy sequence where Asuka dresses up in an outfit and you’ll have to rub over parts of her shoulders or legs (or grope at her) in order to make her happy. 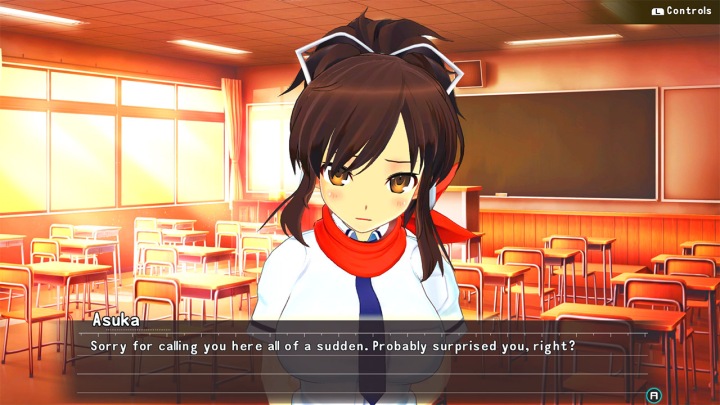 Once you make her happy enough, you’ll move onto the final section of the reflexology session, where you’ll have to massage her in more suggestive places, starting with a hand on her thighs before moving to a comb on her shoulders, where you must shake the joycons to raise and keep balance in a happiness meter, making sure not to do it too much or do it too little. Once you clear a session, your progress is saved, new outfits and themes are unlocked, and the process repeats as you gradually fill the vial.

The above paragraphs is literally all there is to this game, too. Being a quick, repetitive process of moving the joycons or doing the same motions before getting through the process and repeating with another (gradually weirder) fantasy, the other major thing to note comes from the game’s use of HD Rumble… Which despite all the pre-release talk and mentions from the developer, is shockingly lacking. Yes, you can hear the motor running and feel it go up and down depending on where you rub or what you’re doing in a massage, but the game doesn’t make any major effort to have the HD rumble feel stronger or sound different from a funny jiggle. 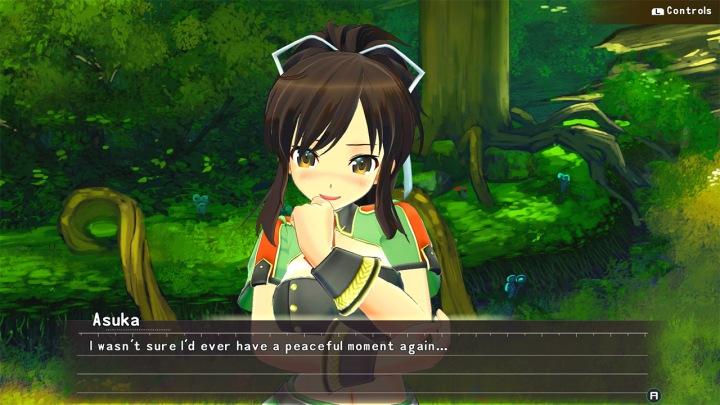 For a game that pretty much acts like a tech demo for HD rumble, it’s disappointing to see it not be as strong as in other games such as Blaster Master Zero. Outside of the main reflexology sections that progresses the little plot there is, there’s also a free reflexology mode where you can just goof around, and a diorama mode where you can mess around with questionable positions that earn this game the M rating, yet still don’t manage to be the weirdest thing I’ve seen. Unfortunately, Asuka is the only character to play with in the entire game, at least by default. This isn’t a long story with multiple characters to interact with in the classroom, but there are a few other characters that will be made available as paid DLC, and they cost the exact same as the base game, which just feels strange to me, and it doesn’t seem like something worth buying unless you really like one of the other characters available for purchase.

In conclusion, Senran Kagura Reflexions is a strange game. It’s not an offensive game or anything, despite how strange it may be for some not familiar with suggestive themes. In fact, this is barely a game to speak of, nor is it even a competent visual novel. There’s no engaging plot, there’s little variety, and the stuff that’s already there gets repetitive in only the first hour and made me lose interest shortly afterwards, and for a game that took advantage of HD Rumble, it’s disappointing that it doesn’t feel nearly as strong or as convincing as it could have been. While it does a good job at being a game that won’t alienate newcomers to the series, this certainly won’t make you any more or less eager to play the actual main games in the series.

Sadly, there doesn’t seem to be any of those on the horizon, save for a remake of the first game, but there is a promising looking Pinball spinoff coming to Japan in a few months, which also aims to take use of HD Rumble. Hopefully that title will get brought over to the States as well, since that seems to have a lot more promise as a game, fanservice, and a showcase of HD Rumble. As for Reflexions? This is really only worth buying if you’re a super hardcore Senran Kagura fan, or if it goes on sale and you’re really curious about the game.

I give Senran Kagura Reflexions a 4 out of 10.