Thanks to Tozai Games for the review code

In this compilation of the two R-Type arcade games, re-released after appearing on the PS3 several years back, you take control of the R-9 Ship as it sets out to destroy the Bydo Empire and keep them away from Earth’s orbit! Unlike R-Type DX, you cannot play these combined in one go, so it’s not an interconnected story here. In fact, there’s not much story at all, per the norm for the time, save for the bits at the ending.

Being ports of the two Arcade titles, R-TYPE Dimensions upgrades the two classics by giving them a full 2.5D makeover, updating the original sprites with 3D models and adding a bit more detail to the backgrounds. The music has also been fully remastered, although in the case of the first R-Type, remixing the tracks doesn’t fix how repetitive and forgettable the music is. R-Type II at least has a better score, which benefits much more from this remastering.

Of course, all of that was also the case back on the PS3, and just like the original version, R-Type Dimensions EX offers the option to switch back to the old visuals and music at any time, with the press of a button. Oddly enough, this isn’t mapped to a shoulder button by default like it was in the original collection, but rather to a face button. You can even unmap it if you wish to resist the urge to switch styles all the time. There’s even a nifty border option for the old visuals, although it makes the screen pretty small and not as practical to play, and the 3D modes have some filter options that just blurs the models to make them look more two dimensional, which doesn’t work so well.

Just like on the PS3, R-TYPE Dimensions EX contains both R-TYPE and R-TYPE II in one package, and both of them are available to play in several different game modes. You have a “Classic Mode” which offers an experience similar to playing the original games, with limited lives, a score attack focus, and a checkpoint system for respawning. On the other hand, the “Infinite Mode” allows you to respawn upon death as many times as you like, and you can even hold down the left shoulder button in order to slow down the action for precise shooting, with the main point of both of these additions being to allow newcomers to easily beat complete two games, while still working to improve their runs by going for a higher score and the lowest death count. These two modes still work great, and there’s even a stage select if you want to start on a favorite stage.

Also new to Dimensions is the addition of a two player local co-op mode, where you and a friend can team up in order to take down the enemy forces together. Classic Mode requires that the other player grabs a powerup in order for them to respawn, otherwise you both get sent back to a checkpoint, while Infinite Mode has the other ship respawn immediately upon death. You can also choose whether or not you’d like to enable collision between the two ships, which can allow for you to push the other player into obstacles if you want to make the experience more competitive.

So, for those who played the original compilation on the PS3 like I did, you may be wondering what makes the EX version stand out from the original, besides the switch in platforms. To be honest, I didn’t really notice much outside of some bug fixes and the fast forward option (which speeds up the game even in the classic mode, if you wanna make things harder), but in the Switch version you at least get the 12 achievements from the other versions within the game itself, which is a really nice addition considering how they aren’t too terribly taxing and are reasonable challenges that encourage both newcomers and veterans to master the game even more.

Speaking of which, I should probably get into the actual games, and what sets R-TYPE apart from its sequel, and vice versa. Both games are horizontal shooters that are broken up into short stages where you must carefully memorize and avoid all the enemies in order to reach the boss at the end and take it out, collecting powerups to increase the power of a force pod that can attach to the back or front of your ship. R-TYPE has eight stages, while the sequel only has six, yet I found that the level design in the sequel was much better to compensate.

In fact, the original R-TYPE becomes borderline impossible to clear without dying after stage five, when the enemy count jumps up to insane amounts and the game just does not want you to win. Keep in mind that this game was originally designed to send you back to checkpoints after a death, which means that just the thought of clearing the final levels without the respawn offered by the infinite mode is one to dread. 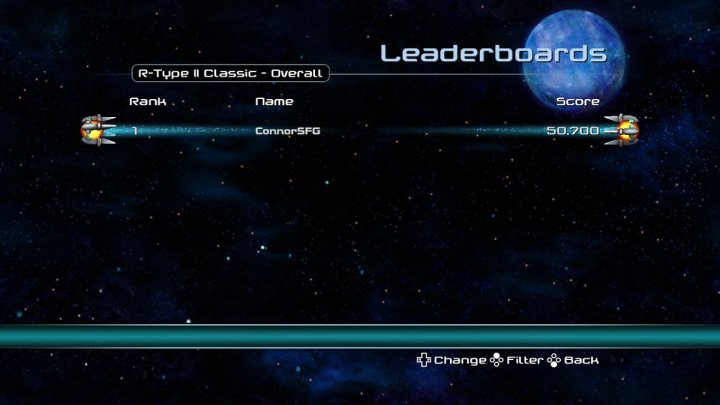 R-TYPE II on the other hand, manages to be a lot more fair, but just as difficult, all because of better powerup distribution and enemy placement that doesn’t come off as non-stop enemy waves, at least, not until the final stage, which slowly creeps back into the cheapness of the first game, but doesn’t feel nearly as impossible, leading to this being the game I preferred to play more in classic mode.

In conclusion, R-Type Dimensions EX is a fantastic collection of two IREM Classics. Bringing a new coat of paint while also allowing for the original look and feel, Dimensions is how retro remakes should be handled, especially since it manages to make these ridiculously hard games accessible for everyone without making them insultingly easy, as it still allows for the original difficulty and even encourages you to challenge yourself for the in-game achievements and online leaderboards, making these games easily replayable even after you reach the credits. EX may not actually mean much in this case, but if Tozai was willing to port this amazing retro throwback on the Switch, then I hope they follow suit with Spelunker HD and Spelunker Collection, especially the latter considering how it never left Japan, and as an M2 joint it would be something the wider world would appreciate now.