Thanks to Grimtalin for the review code

This game doesn’t really have a story outside of a super brief blurb when you first start the game. Build successful cakes and make your way to a factory with your cake making skills! It’s an excuse plot, and I’d normally skip this section entirely because of it, but I am noting it nevertheless because of how it’s just as simple as the rest of the game, so it fits.

This game goes with a colorful, 2D look that’s almost exactly the same as the sort of game I would find on a flash game website back in the late 2000s, during school. This isn’t really a bad thing just because it’s akin to a flash game, since some physics puzzle games on those sites could be really entertaining. Unfortunately, this really looks dull and generic, and the stage map doesn’t do much in favor of the game’s look either.

There’s a chef that pops in every now and then to give advice, but there’s really nothing else to mention here. The music doesn’t even save the game, becoming incredibly forgettable and dull to the point I actually muted it entirely after just a few minutes of play.

Cake Laboratory is really just the Switch version of a certain game you may have seen at your local bowling alley or mall. You know the one, the Stacker game where you must time a button press to make a tower bigger and bigger in order for it to reach the top, promising an absurd prize if you do good? The stages in this game pretty much play out just like that game, only with less cheating and without the intent to drain your wallet.

Each stage has a three star ranking, per the norm in games like this, and each stage has you control a pair of hands holding a cake, which move horizontally on the top of the screen. You must time a button press just right, so it lands as close to the center of the plate as possible. Repeat by stacking cakes on top of each other to make as big of a tower as you can, and you’ll be ranked based on how many cakes you have stacked along with how close they are to the center. 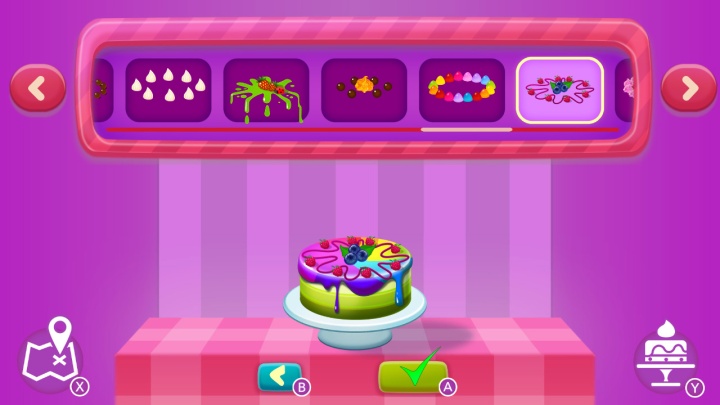 That is literally the entire game, with the hands picking up in speed the further along the journey you are, and every now and then you’ll unlock decorations that you can use to create your own cakes for stacking, although this feature doesn’t really do anything of significance. Getting all three stars in a stage also gets a bit more tricky over the course of the adventure, but it’s not that difficult to go for if you somehow want to bother mastering all fifty stages, since these stages go by very quickly. There’s not really anything in the way of a crazy assortment of conveyor belts or some obstacle you have to stack them on in order to add actual thinking, it’s just mindless boredom all around, unfortunately. I really wish that the developer added some sort of score chasing mode to this game, where you could stack cakes infinitely for points, since that would at least offer a decent bit of replay value and even some challenge to make this remotely engaging.

In conclusion, Cake Laboratory is a very medicore and mindless game, with barely any content, no engagement and really no purpose in anything. Without a high score mode of sorts, the game is just a mindless series of A presses with little challenge until near the end, and even then, it feels like it’s not even a game that kids would enjoy fo long. I really do feel that some sort of arcade/endless mode would significantly improve the experience, or at least levels that are cleverly laid out akin to how Cut The Rope handles the mechanic of dropping a ball of candy.

Hopefully the publisher will pick a more interesting game to publish next time, since they are a really good developer, too, and there are lots of obscure indie games that would greatly benefit from a Switch port.