Thanks to Spike Chunsoft for the review code

Written by some of Chunsoft’s legendary scenario writers, 428 takes place in the town of Shibuya, from multiple point of views over the course of a long day. Revolving around a mysterious kidnapping, a strange epidemic and some mystery, each character works independently to solve the mystery, even going as far as to interfere with each other whether they know it or not!

Being a visual novel, this game is all about the presentation, and per my usual tradition for these types of games, focusing on the presentation over gameplay is what I’ll do in this case as well, since you’ll be seeing a lot of it during the long, long course of this game.

Luckily, 428 manages to keep things interesting. For starters, everything in 428 was done via live action. Yes, this means despite the hundreds upon hundreds of stills in the game, they were all shot with live actors. This even extends to the limited animations in the character select menu, and pretty much the entire game, with the only thing I can really point out as an art style being the game’s unique UI, which is colored like yellow tape.

Sound novels are also typically played with text and the selections being over a background, which are the aforementioned stills in this case. By default, I found the text a bit difficult to see over the images, but luckily there is an option to adjust the contrast of the background image so that the text is clearer. This is the preferable way to play the game, since everything is a lot more identifiable this way.

The background music is also pretty good, although since this is a visual novel, the long amounts of reading means that you’ll likely hear the same song for an extended period of time before the tone changes. Thankfully, most of it is solid and the tone shifts are appropriate, although there isn’t much in terms of music that’s going to be memorable after you turn the game off, save for maybe the track that plays when you use the timeline select.

When it comes to the actual gameplay, there’s little to do besides reading the story and picking a choice when the time comes. Unlike some other visual novels however, this game does add a few extra things to help make the story more interactive than just choosing Option A over B, so there’s still some things to go over. The first difference comes from how the multiple characters each have their own stories that intersect at certain points, all in hour long blocks. So while one character is investigating a criminal, another might be in a confrontation with said criminal. 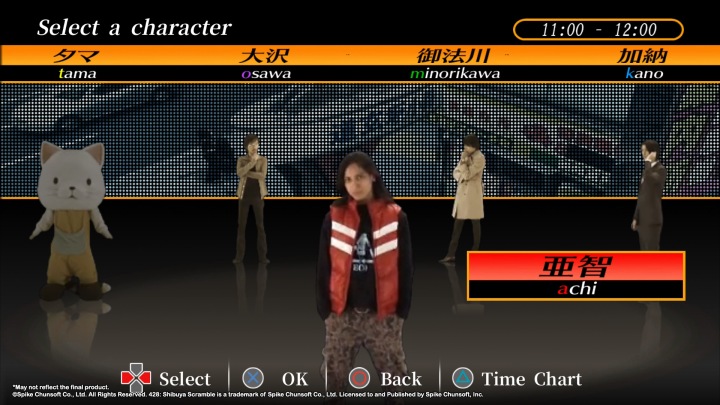 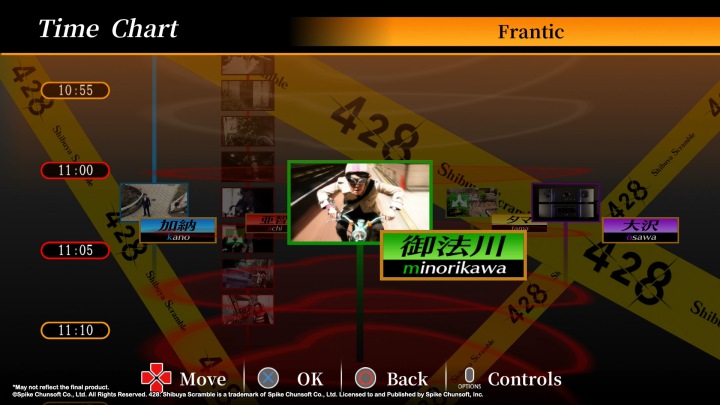 Sometimes if one of the main characters directly interact with one another, or if one of them would spoil the other characters’ story, their story will abruptly be blocked out by KEEP OUT tape, which will require that you play another character up to a certain point where you identify a keyword, and use the triangle button to use that keyword in order to jump back into the blocked segment. This is a great way to keep the game from getting too confusing, if one character ends up talking about something that you aren’t supposed to hear about until later on, although a few of these jumps can be a bit tricky to figure out, and may require checking the definition of a word in another word’s definition. 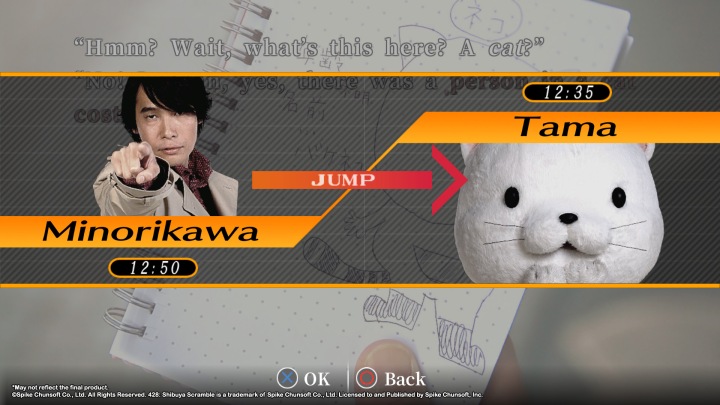 That is basically the entire game, for better or worse. Jumping, avoiding bad endings, and choosing different choices, it’s a sound novel with some helpful additions that keep things interesting, along with a really good story. Considering how a lot of the bad endings are funny, I actually made it my goal to go out of my way to find as many of those bad endings as possible, which made the game go at a slower pace that it will for most people. 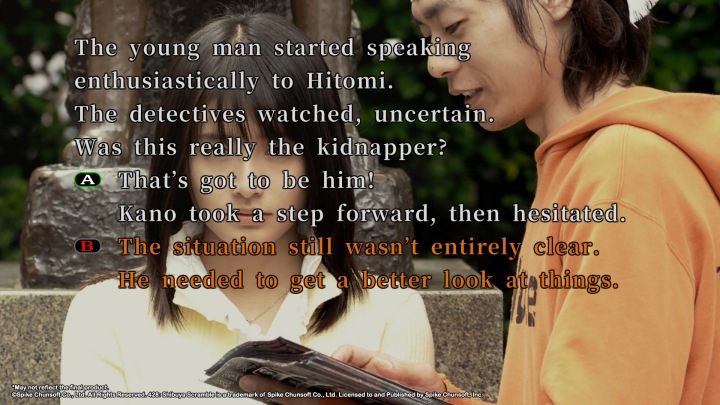 Unfortunately, even if you don’t want to seek those funny endings out, this game does have one major issue: the pacing is horrendous. Yes, even a great, engaging story can suffer if the pacing is bad and everything moves at a snails pace, which is just what the game’s text does here. Good lord, you will not get anywhere by mashing the X button, even once you get the gist of the dialogue. The text autoscrolls slowly, which means you’re stuck waiting and waiting and waiting for the paragraphs to finish, before you can hit X again and advance to the next set of dialogue. Believe it or not, using the autoplay and adjusting the speed of that is the fastest way to play the game, since you can still read all the text in a timely manner, and the game stops whenever you have to make a choice, or if you pause the autoplay to find a new word definition. 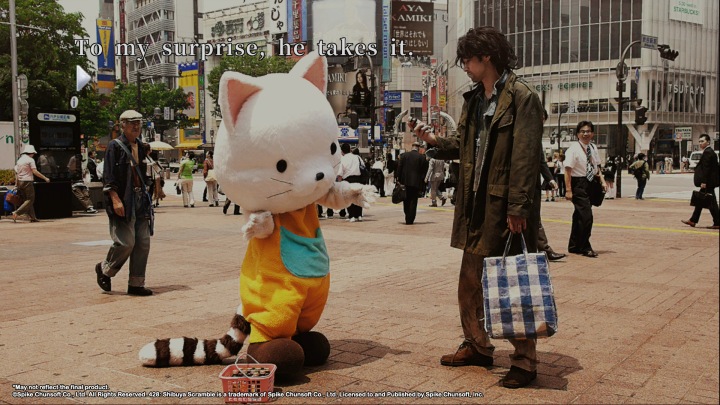 Yes, this may have been a port of an old Wii era title, but I really do feel like that they should have added an option to increase the text speed, or at least allow you to finish the paragraphs at will by hitting X. Thankfully, you don’t have to go through all the text again if you need to backtrack to make another choice or re-read portions of the story. By hitting down on the PS4 D-Pad when a paragraph finishes, you can advance forward to any paragraph you’ve previously seen, meaning that jumping back to a specific paragraph is easy and painless. Combine that with plenty of checkpoints for each choice, and this game manages to prevent frustration.

In conclusion, 428 is a great sound novel that was more than worth the long wait in localization, with an engaging story and some interesting mechanics. Unfortunately, the pacing is a huge, HUGE drag that makes it hard to recommend to those who don’t want to spend too long reading scrolling text, instead of being able to read at their own pace. Still, if you can get past the *long* amount of time you’ll have to spend in order to see this story to the end, you’ll find something very enjoyable, if flawed.