Thanks to Digital Leisure for the review code

In this compilation of three animated adventure games, you can experience the legacy of Dirk the Daring in Dragon’s Lair and Dragon’s Lair II, along with an adventure in space with Space Ace. While Space Ace may now have any of the characters from Dragon’s Lair, it does share the same artstyle, staff and gameplay, which at least explains why it was picked to fill out the third slot in what might as well be titled the “Don Bluth Adventure Trilogy”.

Each of the three games have been remastered, presented in a pretty borebones UI. From the main menu you can choose between the three titles, with options to enable a border that replicates the original Arcade machine, or to display the games in fullscreen, and the footage still look really good all these years later. There’s also an option to enable on-screen buttons which will flash whenever the action on screen takes place, indicating which direction or button to press. (and in the case of the arcade border, the arrows around the virtual joystick and the replica of the attack button will light up, with no overlay on the game footage)

Since the entirety of these games take place in the form of animated cartoons, the animation quality is the only real thing of note when it comes to the graphics, and for the time they look great. Dragon’s Lair and Space Ace do suffer from some obviously reused animations, however, since in one room you may see the main character walking down a hall or attacking an enemy, only for a few rooms later to have the same scenario going on, but flipped horizontally. This was clearly a method to save some budget, and Space Ace doesn’t do it nearly as bad as Dragon’s Lair, but it’s still something you’ll notice during gameplay.

There’s even voice acting here as well, although Space Ace is the only one of the three where it’s a constant throughout the entire adventure, rather than something that only happens at key points.

Regardless of which title you choose, they all control roughly the same; push the controller in a certain direction or push the A button at the right time to avoid hazards that come at you during the video. Keep it up and make your way past the many checkpoints in the game, and you’ll eventually reach the end. It’s pretty basic and like similar games in the genre, you have very little time to react to the on-screen action, and failing this will lead to your death. 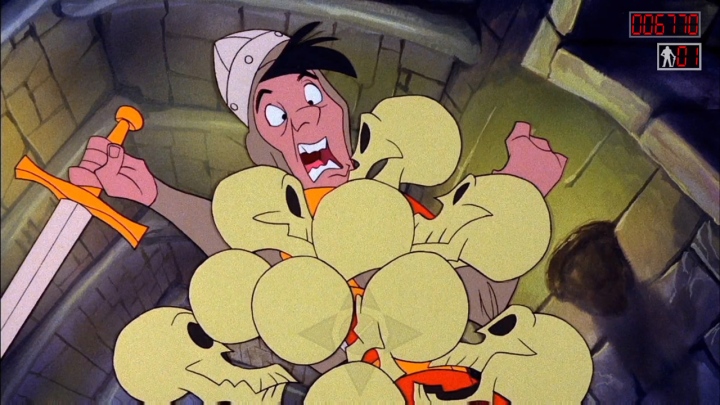 In fact, despite a beginner-friendly option to allow more lenient time limits for these moments, a few of them can still be incredibly tight. It’s a bunch of trial and error, really, and outside of going for a local high score in Space Ace and Dragon’s Lair, there’s little reason to challenge yourself by removing all the helpful prompts, so it’s nice that they’re added to make these games not quite as cryptic as they would have been. 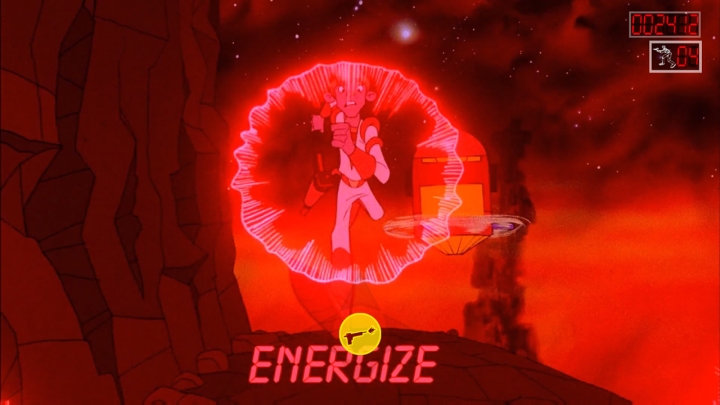 That being said, out of the three games I found Space Ace to be the best of the three, oddly enough. Dragon’s Lair has an option to play the scenes in a random order, but it also leads to it going on much longer than I would like. Playing in a proper order doesn’t seem to help the game from feeling like you’re doing the same thing over and over again, so this was a title I didn’t mind backing out of after I beat it. Compare this to Space Ace, which moved at a faster pace and ended up being the one that’s the most reasonable to beat in one go if you memorize it enough, plus it retains the hi-scoring of Dragon’s Lair. 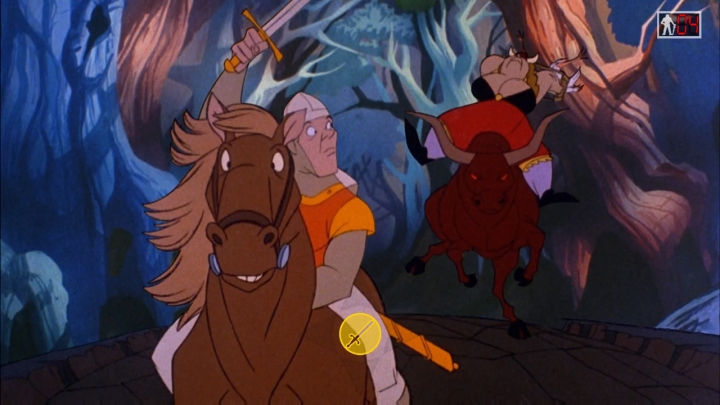 Dragon’s Lair II on the other hand is a bit of a strange one. Coming out much later than the other two, DLII feels more cinematic with a bigger focus on clearing the game to see the story rather than chasing a hi-score, and with more complex animation meaning harder to identify commands, this one was quite tough when I attempted it without the extra prompts. There’s also no hi-score feature, for some odd reason, making this one less replayable. It’s nice to have this included in the collection, but I do wish they focused on making the scoring aspect more fun.

In conclusion, Dragon’s Lair Trilogy is a great collection of 80’s Laserdisc classics, bringing them to the modern age in great way. Despite some underwhelming UI and very little in terms of bonus content, (There’s commentary and even a few promo vids here and there, but not much else) I did find that these games were just as interesting to check out now as they were back in the days.

But when it comes into whether any of these are actually fun to play still, it’s a bit trickier. Being that these games came out as a novelty for the sole purpose of draining quarters, these are beyond brutal, almost to a ridiculous degree in the case of the two Dragon’s Lair titles. Thankfully, the QOL features are a fantastic way of making sure that any newcomer will see the endings to all three of these games if they keep throwing themselves at the game, and more diehard fans have the option of playing these in the original fashion if need be, either to chase Hi-Scores or to see if they can clear the adventures without losing a life.

Space Ace ended up being the one I felt the most comfortable with, but maybe yours will be one of the two Dragon’s Lair titles, or neither at all. Whatever the case, this is a pricey yet faithful collection worth checking out if you have good memories of these games.