Thanks to Idea Factory for the review code

As a cute little side game, Neptunia Shooter continues the series tradition of being a parody of video gaming as a whole by paying tribute to a bunch of old shooters. From an 8-bit artstyle similar to what’s found in certain parts of the main series, to a few basic chiptunes, the game looks the part even if it’s simple and not focusing on any particular system.

The more impressive stuff has to deal with the way the sprites are done. Several main characters from the Neptunia series are here and accounted for, with Dogoo everywhere as enemies. Throwbacks to other shooters are here too, with the first boss being a throwback to the Gradius Volcano and some enemy behaviors being identical to enemies from other classic shooters. (A Dogoo that spins around and is indestructible coming off as an obvious tribute to the Xevious tile enemy, as one example)

Neptunia Shooter starts you out in the first stage with only Neptune, who shoots to the right with rapid fire. As you traverse through the first stage and eventually take on the boss, you’ll end up recruiting the boss as another playable character, allowing for switching on the fly with the shoulder buttons. Each character has a different type of shot, from one that fires at an arc, one that fires backward, and even one that has a charge shot, with five in total to help you through the six stages of the game.

The stages are all simplistic, with only the bosses and the amount of bullets changing up the further you go, mostly to adapt to your new abilities. At around stage three or so, the game ends up feeling like a bullet hell, with enemies coming from all over the place and spamming the screen with bullets. Luckily, your hitbox is fairly lenient, though taking out enemies as soon as they appear is still ideal to prevent them from overwhelming you. 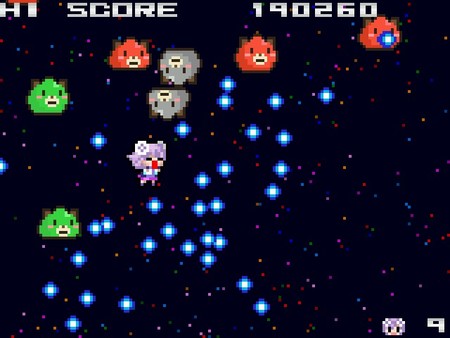 Outside of that, Neptunia Shooter is a super simplistic game. It’s a straight A to B shooter with six stages where the replay value comes from getting a higher score for the online leaderboard, with achievements that are pretty standard and don’t ask much outside of trying to beat the game without losing a life. For a former April Fools joke, Neptunia Shooter is simplistic and basic fun, but there’s not much else outside of the basics.

Neptunia Shooter is a case of a simplistic game being just as simplistic as it seems to be, which isn’t really a bad thing. It gets the job done as a fun little score chaser, with the only major flaws being the lack of variety in the backgrounds and the excess amount of bullets that can appear with very little warning. For high score chasing, this is decently enjoyable, but if you were hoping for a variety of powerups or something besides a simplistic shooter, then you may want to look elsewhere. Still not bad for what was a former April Fools joke.