In this enhanced port of the third entry in the Guilty Gear series, you take control of one of several fighters as they battle it out to investigate the cause of some strange events taking place, caused by a mysterious girl. There’s a story mode this time around for every single character, though they tell their own individual stories which don’t really amount to anything too engaging.

Similar to the rerelease of the original Guilty Gear, this game is presented in a 4:3 aspect ratio with a banner by default. Thankfully you can turn the banner just like before, but you also have several more visual options this time around, from adjusting the UI and anti-aliasing. The pixels look super crisp here and the animation quality is through the roof, far exceeding that of the original and turning into a pretty gorgeous game.

The music this time around is a lot more memorable, though it should be noted that the voice acting is muffled beyond belief, and this can be witnessed first hand in the story mode. This isn’t a Switch exclusive issue either, since it’s on the PC port, so it seems to be a quirk of the original game, but it is something that may irritate a few people. Another irritation could come from how for some weird reason, B is the confirm button and A is the back button, despite the port of the original Guilty Gear using the proper layout.

Just like the first game, Guilty Gear XX ACPR is a one on one fighter where you use four main attack buttons and pick a character in order to duke it out in battle. This time around, there’s a lot more to do, with more than just the Arcade and Training modes this time around. The Arcade mode is yet another ten-round gauntlet of opponents, just like before, though this time around you can adjust more settings such as the amount of rounds and the difficulty, which can help a bit when it ends against a crazy powerful boss character known as I-No. If you don’t use the shielding technique, you will lose to her due to an absurdly stupid move where she can unleash a special move that will drain 70% of your health even if you try a normal block, so this may seem just as tough as the original Guilty Gear’s Arcade mode, but once you get the hang of the mechanics it’s not all that bad, and makes for a fun score chaser. You can even unlock stronger versions of the characters known as EX characters, which have some different moves to toy around with. 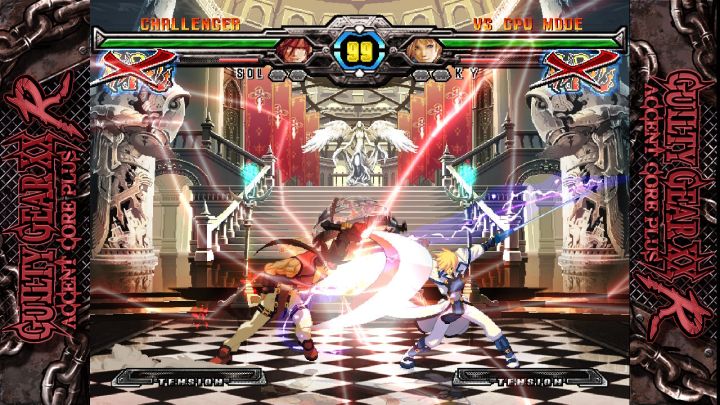 Like before, using the four attack buttons to perform special moves is key to victory, and the instant kill technique returns as well, now performed by pressing all four face buttons at once, before performing the move and pressing them again. Along with that, the Dust button replaces the charge meter from the original, giving you powered up versions of some special moves in exchange for some of your tension gauge, and you can now shield by holding two buttons at once and holding back to block. The fighting in general is just so much better than in the original Guilty Gear that it feels like a night and day difference, leaving to a very fun time.

Besides the Arcade mode, you have another score chasing mode known only as M.O.M mode, where you fight one opponent after the other in a tug of war where they drop medals upon every hit. The bigger the medals, the more points you score, and it’s fairly standard stuff. There’s also a survival mode where just like in Blazblue, you fight a random set of opponents to travel deeper down the abyss, with a boss interrupting your matches every 20 floors or so. These three modes all have online leaderboard support, so your best scores will be uploaded for the world to see. 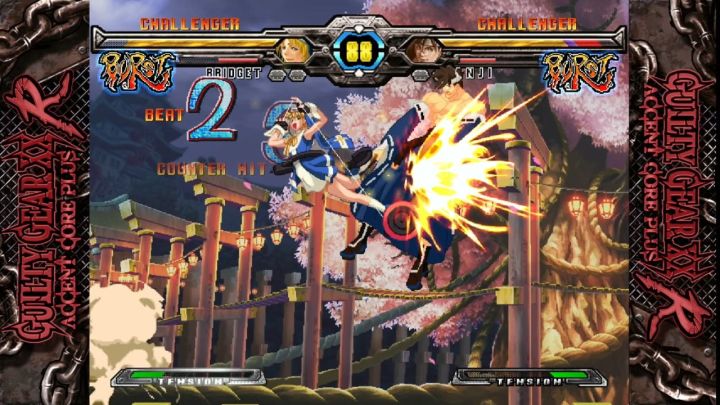 There’s also a few other modes as well. There are a few Team VS modes, where the 1 on 1 fights expand into multi-person battles, and there’s a gallery containing all the artwork that you can unlock over the course of the game. Story Mode is also here, allowing you to pick any character as they fight through a series of battles to reach one of multiple endings, influenced by being able to choose your own path at certain points. The story mode in this game isn’t nearly as engaging or noteworthy as the one in Blazblue though, making it feel like an afterthought here. 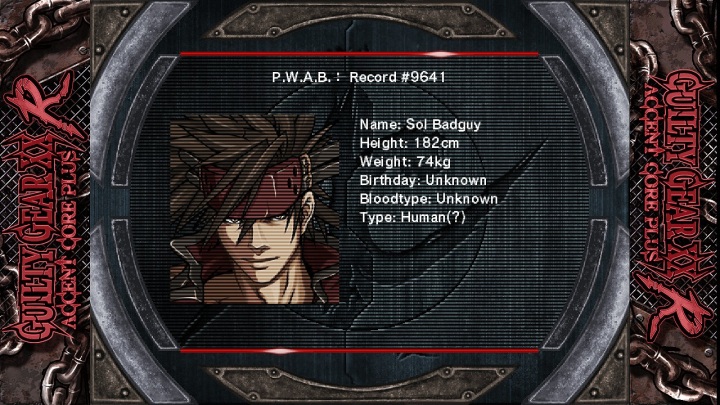 Last but not least, is the online Network mode. Despite my best efforts, I couldn’t find a single other soul to test the online multiplayer with, despite multiple nights of testing, so I can’t describe how good or bad the online multiplayer is. Unfortunately, it seems that if you get this game you may end up with a small online community, with only the online leaderboards being remotely useful at this point in time. Considering it’s been several weeks since the eShop launch, it’s not a good sign to say the least, so I wouldn’t recommend buying this exclusively for online purposes.

In conclusion, Guilty Gear ACPR is a really enjoyable fighter, despite being a bit older than some of the more entries in the franchise. It’s a strange choice having this one ported over a more recent one such as XRD, but ACPR still holds up extraordinarily well, with a bunch of single player content to unlock, great fighting mechanics, and a great game balance that make this worth revisiting whether you’re a newcomer or a big fan of the series. For $15 it’s practically a no brainer for fighting game fans, with the lack of an online community and the awkward confirmation button being the only major flaws with this version.