Coming from Nichibutsu in 1988, Terra Force looks pretty dang good for the time period, with 16-bit sprites and backgrounds that do a decent job of holding up today. Being a horizontal game, it looks super crisp on the Switch’s handheld screen, and as per usual, all the extra display options and features from other ACA titles are here in this one as well. There’s even a few tunes this time around, compared to Terra Cresta’s limited soundtrack.

Terra Force plays a bit like a mix of a refined version of Terra Cresta with some vertical stages, before turning into a horizontal take on it whenever you go underground. This shift between vertical and horizontal comes off pretty similarly to Konami’s Salamander, but unlike that game you pretty much have a lot of control on when you shift perspectives.

You start in the overhead vertical portions, with a shoot button for your normal weapon and a missile button for dropping down missiles, akin to Xevious. Defeating enemies will reward you with the occasional powerup for one of three categories, those being for Laser, Bomb and Speed. Speed simply increases the speed of your ship, laser improves your normal shot and can do some serious damage when it’s all powered up, while bomb makes your missiles strong enough to blow open craters in the ground. Entering one of these craters will shift the player to the underground horizontal sections, where it plays a bit like Gradius in terms of avoiding, shooting and dodging enemies. 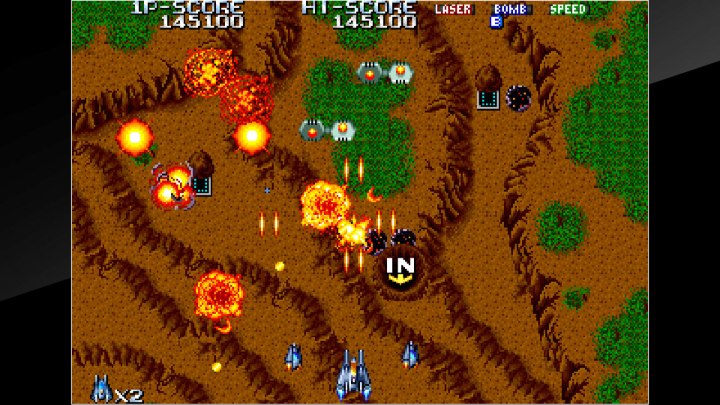 At the end of one of these sections, you will either be forced to temporarily shift into the other persective or will end up fighting one of the game’s very few bosses. While the game does a good job of respawning you close to where you die, if you’re before a boss then you’ll be locked to a specific checkpoint, and the mandatory bosses can be just plain brutal near the end of the game if you lose your powerups. Needless to say, recovery runs are not the best option here, and you’ll likely want to reset the entire game before fighting a boss with just your normal shot. Still, the stages are a lot of fun to play and getting fully powered up will make you feel incredible.

Like per usual, ACA games provide players with Hi-Score and Caravan modes and they work really well in this game being that it’s a shooter. Caravan can easily be pretty addicting, while Hi-Score is the usual no-continue run which is usually provided. They still both work just fine and are fun bonus modes to add some replay value to this rerelease.

In conclusion, Terra Force may seem like a shooter that does little new, but in all honesty it doesn’t really need to. Fun stages, a simple powerup system and serving as a great score chaser makes this Nichibutsu gem a worthy pickup for fans of shooters. Just be prepared to have a hard time beating this if that’s your main goal, since as per the norm recovery runs can be downright evil here. Still, for score chaser fans, this is a really solid addition to your Arcade Archives library.

I give an Arcade Archives TERRA FORCE a 7 out of 10.