In this simulator of the Yu-Gi-Oh TCG, you get to build your own decks and take on people all around the world, while also revisiting many different duels from the six Yu-Gi-Oh Anime series from NAS to play them for yourself! There really isn’t much of a core story and anything in the main story mode is just recycled from the anime episodes themselves (though with a bunch of duels excluded since obviously not every duel from each show is included)

Compared to the original release of Legacy of the Duelist, the game has seen only a few minor tweaks to the overall look. For starters, the dueling field has been updated to match the more modern rules, and the watermarks on the cards have been removed. There have been a few new CG animations added for select signature monsters alongside the monsters from the original version, but neither of them look all that great, and there are a few signature monsters that you’d think would have those animations as well, but they don’t for whatever reason. (Exodia, The Egyptian Gods, The Sacred Beasts and Dark Magician of Chaos would be a few that I’d consider no brainers)

Everything that returns from the original version still looks fine, even if I do feel like the lack of background variety is pretty disappointing, especially when it comes to the story mode duels, as some of them sport backgrounds that look nothing like what they did in the show at all. Like before, the story duels have little introductions before the battles start, but they’re fairly brief and the background variety is still low. Disappointingly, the background music for the entire game is still incredibly generic and lackluster and there isn’t any trace of familiar background music from either the Japanese or Western versions of the anime, which feels like huge missed potential considering the fantastic soundtrack the Japanese Anime has along with how memorable some of the Western themes are.

Likewise, the cards are still based on their US versions which means that certain cards that were altered for whatever reason are still edited. (For example, the Exodia cards have a Spellbinding Circle in the background instead of the pentagram, and Monster Reborn has the weird eyeball sword instead of the green Ankh) Thankfully, the menus are super easy to navigate and touch-screen friendly, which makes sorting through the thousand of cards in this game incredibly seamless and easy.

While the Yu-Gi-Oh card game is one I grew up with, both via the early anime and the card game, I’ll admit that I dropped out of the real life card game around the time GX was kicking off. This means that I’m at a complete loss for the four new card types introduced since then, and this game needed to teach me the basics and refresh my memory on the older stuff. Thankfully, I’m happy to say that the story modes for every arc of the anime do a great job with introducing that series’ respective gimmick and teaching it to new players, since the first story mode duel for each series is a guided step-by-step tutorial. (that you can skip and turn into a normal duel if you so desire) To keep it simple for readers who don’t know anything about the game, the main goal of a duel is to summon monsters and play support cards in order to drain the opponent’s life points to zero before they can do so to yours, and with the thousands of cards available for you to build decks from, there’s a ton of variety to toy around with. 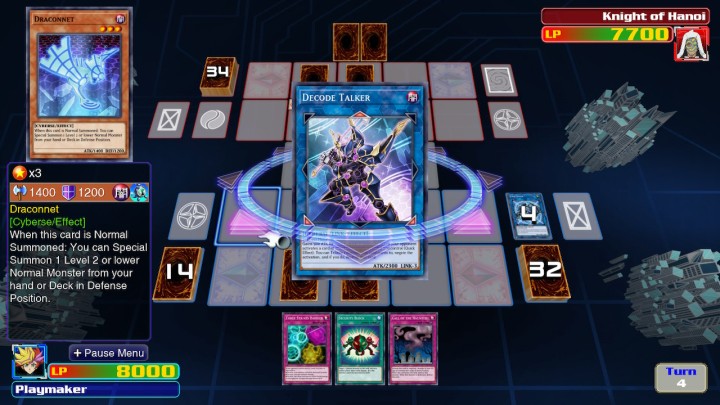 Of course, you actually have to get those cards in order to build with them, which means that you have to play the main story mode to get enough Duel Points to buy the booster packs. Luckily, each story mode duel allows you to duel with a recreation of the anime decks without the need of owning the actual cards, so you can use those until you build your own. These are a great way of learning the newer cards or trying out different archetypes, although some duels are significantly more difficult than they have any right to be, especially if you play the unlocked reverse duel obtained upon beating the opponent. (since the player decks are often made to counter the CPU, playing as the CPU’s deck leads to a higher challenge, for better or worse)

The Duel Monsters arc in particular has this problem the most, with battles such as the Seeker being infuriatingly difficult due to the fact that he really does use an illegal deck just like in the show, (meaning that he has three copies of a five piece instant-win card, leading to the rare moment of him drawing all five pieces on his first turn at times) while characters such as Joey or Yugi use horrible decks in the earlier duels that are filled with worthless level 5 monsters with only 1700 attack points. The newer the duel, the more sensible the decks become (as newer cards are made and are made with competitive play in mind), but playing with their actual decks can show just how bad some of these actually were in the show. At the very least, it lets you toy around with cards that were since marked as Forbidden such as Graceful Charity, so if you want to make your own Illegal Exodia deck you can go nuts with one for story duels.

Some reverse duels are also laughably terrible, such as the Kagemaru fight in the GX arc, who sounds amazing to play as at first due to him owning the Sacred Beasts and some supports for them… Only for him to own three copies of every Sacred Beast, which makes it near-impossible to summon them since they require a bunch of tributes to bring out and it’s clear the deck was built that way so that the player deck wouldn’t get utterly destroyed. Thankfully, being able to use your own deck as an alternative evens the tide a bit, but the reverse duels didn’t feel like they had nearly as much care put in them as the standard ones, due to the horrific difficulty curve from these. To make things even weirder with the story duels, the new VRAINS story duels are even more limited in that none of the duels have a story attached to them at all and there’s only three of them, one of which is the tutorial, and that’s incredibly disappointing considering some of the cooler duels to have happened in VRAINS‘ first year.

Still, once you win or lose a duel, you’ll gain some cards from the opponent’s deck along with some duelist points to buy your own packs, which can lead to being able to buy hundreds of cards after clearing an entire arc. Unfortunately, there’s no way to tell which booster pack a card you have is from outside of remembering it or looking it up online, which is a baffling design choice if you’re hunting for a specific card but don’t know which pack to find it in. But once you have your own deck, you can play it in the story mode duels like I mentioned or take it to the online duels, which allow you to play against people from all over the world just like in a real legal TCG match. Likewise, you can play locally, but only via separate systems.

Last but not least, the Duelist Challenges and the Sealed Pack battles. The Duelist Challenges allow you to face off against characters from each series after you beat them in every story mode battle, but instead of using their story decks they use completely made up, competitive tier decks, requiring that you use your own custom deck to take them on. As an extra challenge, these are a lot more fun than the reverse duels, since the decks are pretty fair to fight against and feel a lot more like a legal match than anything in the story mode. The Sealed Pack battles allows you to spend some duel points to open a sealed box and play with those cards only, akin to pre-release rules, though I didn’t find this nearly as interesting.

In conclusion, Yu-Gi-Oh: Legacy of the Duelist Link Evolution is an addicting version of the classic card game, with most cards up to late 2018 included for play and a very, very lengthy story mode. Combine that with the duelist challenges and you’ll easily exceed dozens of hours of content if you want to 100% everything, and even more if you want to obtain every card in the entire game. With a slick control scheme and a great UI for duels, they fly by in no time at all and are hardly boring. However, the generic presentation, the lack of a proper search feature for booster pack cards, and poorly designed story mode decks can be a bit of a damper on this otherwise outstanding experience. Even if you’re a lasped Yu-Gi-Oh player like I was, this is still absolutely worth a look, and serves as a great tutorial for the main card game along with being a great place to experiment with gimmick decks. If you’re looking for a lengthy, addicting card game to play on your Switch, then this is an absolute must-have!

I give Yu-Gi-Oh: Legacy of The Duelist LINK EVOLUTION an 8 out of 10.

One thought on “Yu-Gi-Oh! Legacy of the Duelist LINK EVOLUTION (Nintendo Switch)- Review”