For a puzzle game, Glass Masquerade 2 looks pretty fine for what it is. Going with a theme of ornate glass paintings, pretty much every aspect of the game reflects this, from the stage select, the menus, and of course, the puzzles themselves. It does feel pretty artsy, but not in a jarring or conflicting way, and I found myself pretty comfortable with how the game looked.

I did find the music very generic, however, and since the puzzles can take an extremely long amount of time, I just ended up turning the in-game BGM down and increasing the game’s sound effects, as I would turn on a youtube video or movie to supplement the puzzle action, which flowed much better for my focus.

Glass Masquerade 2 is a puzzler where the main objective of each stage is to piece together a glass painting by fitting the loose shards together. It’s a bit like tangrams in that sense, except every single stage is a circular painting, so it’s not like you’re fitting the pieces in crazy shapes or anything, even as the puzzles require more and more shards to complete. 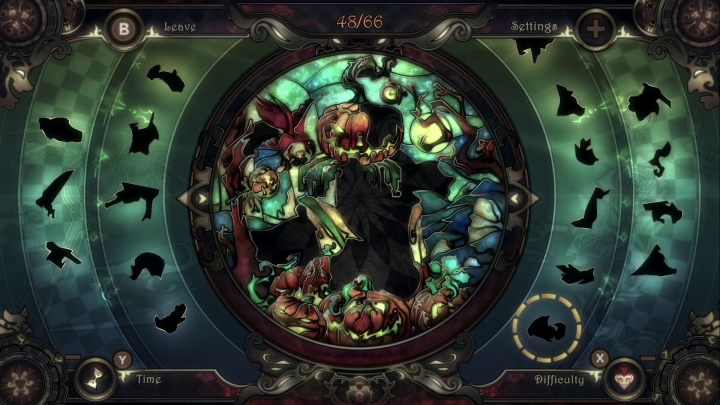 Each puzzle starts with several red pieces, which connect to hooks on the edge of the screen. Once all the red pieces are put in place, you then have to search for pieces that will connect to those red pieces, building off of them. Eventually, you’ll be able to build the image piece by piece by connecting a new piece to your last, meaning that if you find a piece that fits in a spot but doesn’t connect to anything, then the game doesn’t let you put it there just yet. This is a bit annoying, but nothing too frustrating since I eventually was able to figure out spots for the pieces I needed, while keeping the ones I figured out early for later. Once all the pieces are assembled, you complete the image and move on to the next set of stages.

That’s practically all there is to this game, with alternate paths on the world map leading to bigger, trickier stages every now and then. (clearing stages awards you with keys that can unlock future stages, so this is a good way to get a lot of keys early) However, while the default difficulty does allow you to just place and move pieces at your leisure, there is a harder difficulty where the game gets a lot more tricky and more in line with Tangrams. When a puzzle is on this harder difficulty, you now have to rotate the pieces with the shoulder buttons in order to fit them. If you know what a piece is supposed to look like, then this isn’t really much of an issue, but for those small pieces where it doesn’t really give one specific direction, then it can be a huge nightmare, especially on the bigger puzzles.

Luckily, backing out of a huge puzzle will save your progress, which is handy considering that these puzzles often took me anywhere from 15 minutes to 50. Yet oddly enough, I never really minded the length to any of these save for the expert difficulty ones, since I was able to usually get in a good rhythm by playing this as I watched a TV show or a lengthy youtube video, since it really does make for the perfect distraction. Do whatever you’re doing, glance down and work towards the puzzle in the meantime, and you’ll eventually have it solved. It doesn’t really do much else, but the game accomplishes what it sets out to do fairly well.

In conclusion, Glass Masquerade 2 is a fairly fun puzzler that is exactly what it shows on the tin. It’s a puzzle-piece game where you build an image out of glass shards, and while it has elements of Tangram games, I found this to be a lot more enjoyable and easier to get into than the Tangram game already available on the eShop. The controls work fine, it’s the perfect background game if you’re wanting to binge a lengthy movie or video, and it’s just pure puzzle solving fun.

On the other hand, the game is nothing more than that, and I do wish the music wasn’t really that generic. I definitely want to pick up the first game now after playing this, but overall the best way I can recommend the game is to just look at the screenshots. If this looks like a fun puzzler to you, then go ahead and pick it up as it’s what you expect. But if the images make you go “wow, this game doesn’t seem to have much else to it” then you may be right and might want to hold off for a sale. This is an enjoyable puzzler, but it doesn’t really do anything too crazy or special with the idea.