Thanks to Hard Copy Games for the review code

A loooonnnng time ago, I covered and reviewed this game on the Wii U. This version is a port of the same game, with the only major changes being that the game is now completely uncut. All the M rated material that the Wii U version lacked is now back intact in this version of the game, though the story still remains relatively the same, going through multiple worlds to save your hiney. Let’s dive in and see how this revisit holds up!

Electronic Super Joy looks fine overall, just like the on the Wii U. However, that version was edited in terms of content. I mentioned in the review for that version, that while the sequel was released untouched, the original version was not, and thus it meant the removal of some lewd material.

Well, it’s all back here in the Switch version, and it’s pretty weird, to say the least. You can turn off the weirder aspects in the options, to make it the same PG option as on Wii U, but all you’re really missing out on are some lewd jokes and really goofy moaning/seductive sound effects.

It’s pretty odd adult humor, and it’s totally inoffensive, but I didn’t find that it added too much of importance to this game, so generally the presentation felt just as good as the other version I played, with the same great musical score to boot.

All the content from the other versions of the game are included in the Switch version of Electronic Super Joy, and while most things I noted in my old review remains true here, it’s still key to look at this with a newer mindset, now that I’ve been able to learn more of the game’s tech and get further than I did back then. 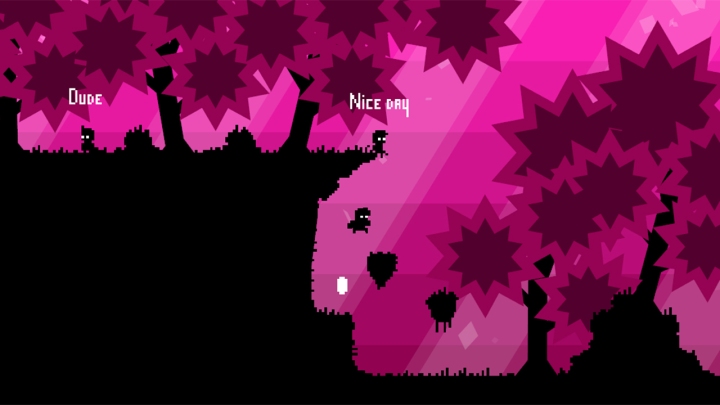 You still have your typical jump, and solid, tight control. I just reviewed another simplistic platformer, so this isn’t really out of the ordinary. ESJ gives you a handy method of attack in the form of the stomp, which can be used to kill enemies or projectiles. With that simplicity, you just go into battle and travel through the stages!

Generally, these stages are fairly fun, usually being rather short to the point that you can clear them in a minute. However, this game is pretty tough, and some of these stages will take many, many tries to complete, especially in the stages with checkpoints. Still, the game also relies on memorization, so once you get the flow of a stage, it can feel brilliant to blaze through a stage that originally took several minutes to clear with just checkpoints, in just one flawless run. 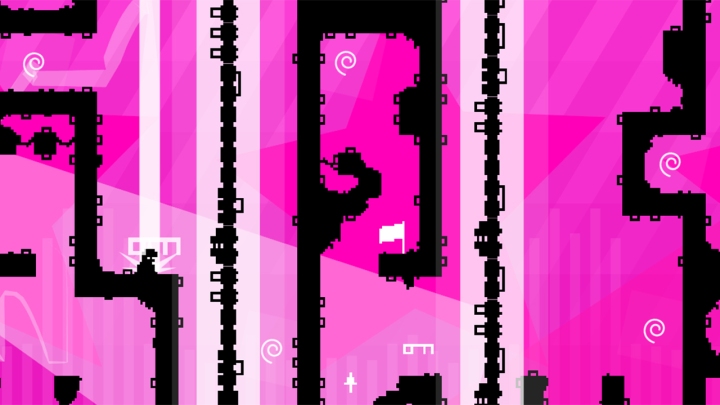 That being said, there are other stages that change up the general flow of the game. Some of these are clever, such as those that take away your stomp attack and forcing you to rely on your dodging skills. Others give you a double jump, which can be useful for precise platforming, but also takes away your stomp. There’s even clever boss battles that change things up even more, such as tasking you with dodging projectiles for a certain amount of time, before taking on the boss in a side scrolling shooting stage.

Generally it’s all the same old fun I had back then, but with things I didn’t quite appreciate back then, or still hate. One of the latter comes from the game’s favoring of auto-scrollers. Some stages automatically scroll, and while the short, sub-minute stages are still tolerable enough, there are a few that go on for over a minute, even without checkpoints. 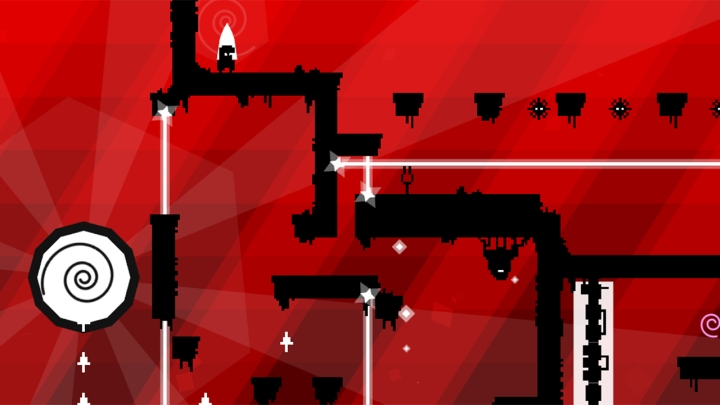 They aren’t too common, but these are definitely the stages that can trip up a player the most, since while these stages are the most checkpoint friendly, they’re also the ones that you can spend a very long time, retrying over and over and over again on. Thankfully, there’s a handy quick retry with the X button, but I still wished that the levels were more consistent with their length, instead of feeling like it goes from short quick stages to medium sized gauntlets. 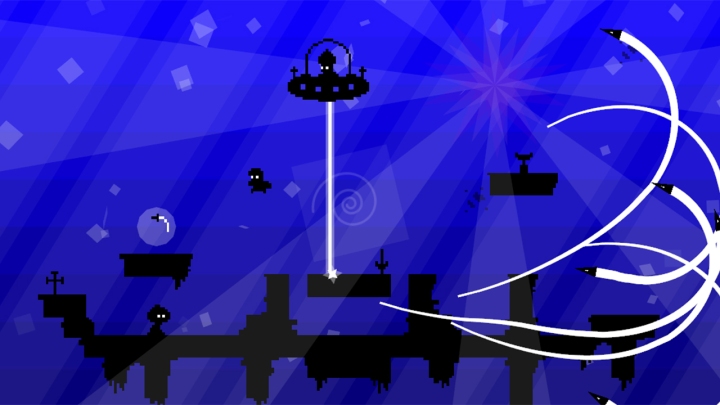 Besides all the stages and DLC content, there’s also some extra nifty bonuses. One of the ones I didn’t seem to remember using before, was an endless gauntlet of random stages, where you can try for the highest endurance round to see how many stages you can clear without dying. It’s a fun little race mode, really meant for unlocking some achievements.

The other cool feature are the addition of online leaderboards, although these are ridiculously limited: Only ten spots are open per stage, meaning that only the ten best in the entire world will be able to even show up on this leaderboard. On one hand, it can feel very satisfying when you go on a perfect run and end up on a stage’s leaderboard, (As I managed to a few times) but on the other, it does suck that you can’t see what your friends’ times are, unless they also happen to be on a stage leaderboard with you. It’s a bit too limiting, and I can’t help but think that these leaderboards could have been a lot more fleshed out.

In conclusion, my feelings on Electric Super Joy are pretty much the same as they were back in 2015: It’s a super solid yet challenging platformer with plenty of replay value, thanks to the bonus content, collectibles, and in-game achievements to unlock, and since this one isn’t the censored one from the Wii U days, this is pretty much on par with the Steam version, so you have a really good port of a fun platformer to enjoy.

Still, I kinda wish they did some sort of extra bonus for the sake of this version. HD Rumble, better leaderboards, anything. As it stands right now, Electronic Super Joy on Switch is just a standard port, and little more. If you own this elsewhere on a system that isn’t the Wii U, and you don’t feel the need to rebuy it, then this version won’t have anything that drags you over. Still, it’s a fun game worth checking out, and one of the better simplistic platformers out there.