Thanks to Ratalakia Games for the review code

Metagal is a 2D side scroller, using 16-bit inspired sprite art and music. Unfortunately, while the sprites look OK, they don’t really have much going for them, and I found the music to be incredibly generic and annoying. Another gripe I have is how the game feels like it’s a bit too zoomed out for whatever reason, which can make the levels feel a bit more spacious than they actually are.

As a result of this design choice, the instant-death spikes are absolutely puny in Metagal, being nigh impossible to see compared to other parts of the stage. Thus, a lot of my deaths from them came out of complete nowhere, with me only realizing that the itty bitty spikes were there after my death. Even when I remembered where those spikes were after trial and error, the sizing is a big problem in this game, and I feel if the game was a lot more zoomed in then things would be a lot more playable and nicer looking. As it stands now, the game feels like one of their odd, funky Mega Man fan games that you might have downloaded in the early 2010s while waiting for the next main installment, for better or worse.

Metagal starts you out with the first set of four main stages, before giving you the final four stages once you clear the first in any order of your choosing. Like with Mega Man, defeating a boss will award the player with a new powerup, from a handy shield, to a land mine, among a few other things. Using these on certain bosses will do more damage than your normal weapon, so there is a weakness chain to follow in this game too. 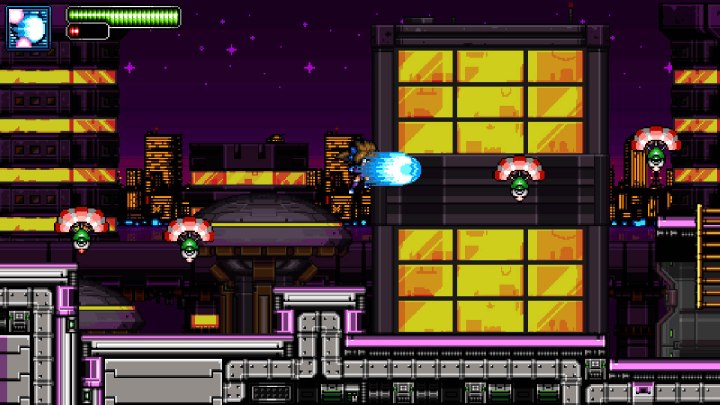 Unfortunately, while these powerups are basic, yet fun to play with, (the green shield was my go-to for my time with the game, since it pretty much shielded me from all projectiles and stopped me from getting knocked back while I was near pits) the stages in Metagal are not in the slightest. Typically, Mega Man esque platformers have tight controls, fair level designs, and good polish, with Venture Kid proving that cloning the series isn’t a bad thing if done well!

But Metagal just feels horribly clunky. Dash jumping feels pretty floaty, and as nice as it is that your weapons automatically refill after use, (instead of having to hunt down weapon energy) they don’t really seem to have the same sort of punch as a traditional Mega Man weapon.

Easily the worst part of the game by far, comes from the level designs themselves. Some of them start off fine, before you then get thrown into gauntlets of tiny instant death spikes, battling over death pits, or cheap enemy placement where you can get knocked right into one of those instant death hazards. The game is a bit generous when it comes to battling bosses, since you can sacrifice one of your lives (“Gears”) in order to refill some health, and they’re rather plentiful. Dying before one of these cheap segments usually is no big deal, since you can just find a gear from an enemy or placed in the stage and keep trying over and over again, but it’s still a horrible design choice to have so much of the deaths come from cheap hazards, rather than cleverly designed platforming challenges or satisfying combat. 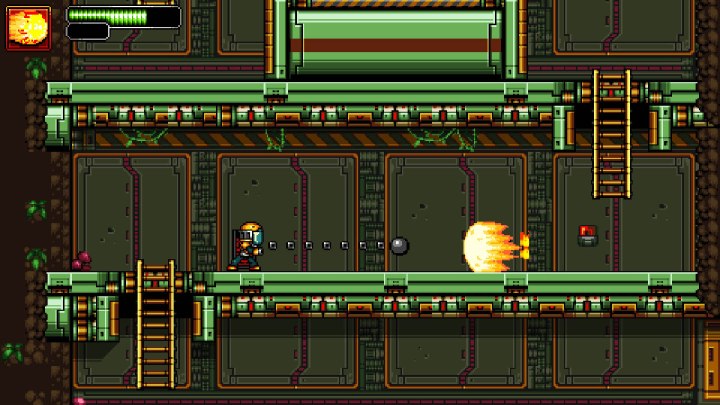 I feel if the levels were more streamlined, balanced, and the challenge came from dealing with enemies moreso than instant-death nonsense, then Metagal would be a lot more fun to play, but as it could stand, I only managed to beat three of the four initial stages before ragequitting in frustration, which is not a thing I do too often.

In conclusion, Metagal is an utter mess. Floaty controls and lackluster presentation aside, I still found the weapons to be useful for the type of enemies fought in this game, even if they aren’t nearly as helpful as a Mega Man weapon would be. The boss battles are still fun, when you can get to them, but the game is filled with a ridiculous amount of cheap deaths and obstacles that you’re more likely to die to microscopic spikes over mistiming a jump. Combine that with a trophy set that literally gives up one stage into the game, (you can platinum this whole thing in under 20 minutes, it’s kinda absurd) and you have a game that could have used a lot more polish.

On the bright side, I do feel a sequel could have the potential to be a pretty fun, decent clone. Fix the cheap level design, make spikes a lot more visible, polish up the presentation and zoom in the action a bit, and you’d have a more decent, playable Mega Man tribute. But as it stands with this first outing, it’s not really worth your time, even for the lower price.