Thanks to DotEmu for the review code

In this belt scroller action game, set ten years after the climatic ending to Streets of Rage 3, you take control of Axel and Blaze, along with two newcomers related to their old allies as they set out to stop a mysterious rise in crime in the city! Old friends and enemies come back, and while the story in general is fairly standard for the genre, it does offer some nice surprises for those who’ve played the previous three games, without making any of them mandatory.

Right from the onset, Streets of Rage 4 looks significantly different from the previous games, given the gap in years from the last installment along with the obvious improvements in technology since then. But instead of being a 32-bit themed throwback, or a sprite based game in a similar fashion to Double Dragon IV, Streets of Rage 4 uses the 2D art that made the recent Wonder Boy III remake stand art, and it looks insanely good in motion. Seriously, this is one game where looking at screenshots doesn’t do it justice, with the animations reminding me a lot of work from Wayforward, with toony art and lots of frames to make the characters stand out. The stages also have some really lovely backgrounds, and just between the two Lizardcube games, SOR4’s visual quality far exceeds that of the Wonder Boy remake, showing that the dev team has improved their own style since then.

Another cool visual touch comes from the unlockable additions of the old sprite versions of the playable characters from Streets of Rage 1-3. Not every single version is there, (and unfortunately, the 8-bit Game Gear/Master System versions are MIA) but nearly every Genesis character is available this way, and they control and work very similarly to how they did in their original game, animations and everything. This means SOR1 characters can do little but button mash and summon a Police Car, SOR2 have all the complexities and special health-draining moves, and SOR3 can dash and do a few more moves.

Along with this is the option to toggle a selection of retro songs from the first two Streets of Rage games (no third, sadly), both the Genesis and 8-bit versions! Sadly, they aren’t necessarily demakes of the newer themes, (some of which are remixes, while a lot of them are brand new and really impressive, even a lot of the ones that aren’t from Yuzo, meaning that the new composers are worth your time) and are just random songs from the game, but it’s pure bliss to hear some of the greatest of Yuzo’s work, and to have a better chance to listen to the underrated 8-Bit renditions of some songs, so this is definitely a musical treat to behold as well, with excellent new additions and the best of the older scores for those who prefer a fully-Yuzo OST.

Being a traditional belt scroller, Streets of Rage 4 immediately offers up the action from the very start. While one modern character and all the retro characters are locked at the start of the game, you still have four characters to choose from, each with their own benefits and weaknesses. All the modern characters have their own unique fighting quirks, with some being faster than others, some having long range moves, and even one that has a shuffle dodge to evade an enemy punch, and the only character I found boring to play in this style was Axel, oddly enough. The others just had better combos and more fluid combat.

Unfortunately, while SOR3 allowed every character in the game to run and sprint, SOR4 doesn’t really allow that across the board anymore, with only the SOR3 sprite characters retaining this ability unanimously. Sure, Adam can do that dodge, and Blaze & Cherry are speedy characters in general, but it’s not quite the same, and having played a lot of brawlers that have some sort of dashing in mind, it feels a bit weird going backwards in a series that had it done twenty plus years ago. It’s just a good thing the level design feels like it had this exception in mind.

The twelve stages in the game are an absolute blast to play, and fly by so quickly that I never really felt like I had to dash in order to pick up the pace. Still, it would have been a neat addition, but with the combat feeling so fluid and the pacing being near-perfect, the combat made the experience that much better, removing a lot of the repetitiveness that comes from games of this nature, since there’s hardly ever a dull moment.

That being said, there are a few instances where a singular type of enemy can become rather frequent in a stage and swarm the player, and I personally found the knife-wielding enemies to be the most aggravating to deal with when this happens. Thankfully, this is an only minor blot on an otherwise great brawler, and you can still take them out easily once you figure out how to avoid their weird hitbox. 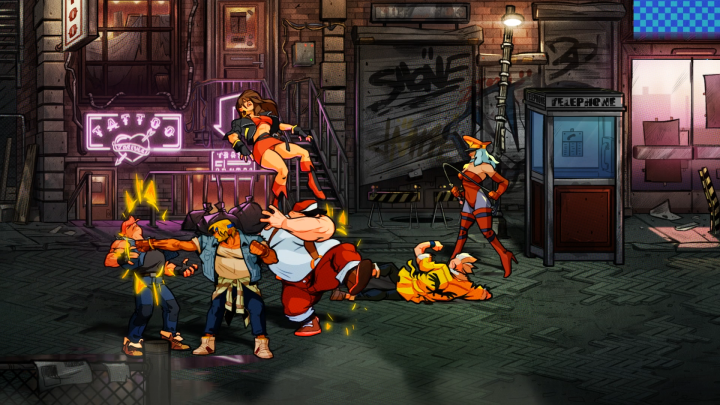 Outside of that, there’s a new addition to combat known as Star Moves, which go beyond the health-draining special move, and are limited quantity special moves that do a devastating amount of damage to nearby enemies. They’re kinda like the car move from the first Streets of Rage, only much more effective and not a pace-breaker to combat. Since you don’t have many on hand in each stage, usually it’s best to save these for swarms of enemies or the boss fights.

Each stage also provide a ranking when you clear them, depending on your score. Like most games with a ranking system, the faster you clear a stage, the more your bonus points will be, along with how long you can keep a combo chain going. With the satisfying combat and the variety of moves the SOR4 cast have, this leads to a very fun level of strategy, and the bonus modes take advantage of this as well. 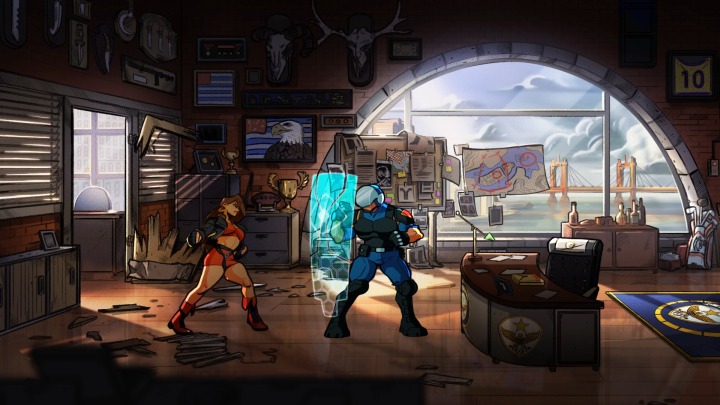 Speaking of the bonus modes, they’re pretty solid additions to the game, and all but one are locked until you beat the main campaign. The one bonus mode that’s available from the onset is the Battle mode from Streets of Rage 2 and 3, and it’s pretty much the same in 4, only with the addition of online multiplayer and multiple stages to play on!

This is just a basic mode where you fight another person, akin to friendly fire rules in the main game, and while the combat still isn’t like a fighting game, it does provide some mindless fun with a friend, and I found this mode to be the one that worked best online, due to an issue that’s more irritating in other modes not being as bad here.

Speaking of online, that’s another thing the game added, as it also was added to the main mode: I wasn’t able to test local co-op due to the current situation, so I hopped in several online games with people to see how online co-op would play like. Unfortunately, the verdict isn’t good.

While jumping into a game was quick and easy to do, I noticed a very jarring framerate cut to the gameplay when I jumped in, with the game not feeling nearly as smooth as when I was in the single player campaign, and this didn’t change no matter what game I joined in. It still felt locked, but not the full framerate, and laggy enough to be very noticeable to me, and it was pretty jarring.

Another gripe comes from if someone disconnects during the game: No matter what, if you’re a host or a joiner, the whole stage will just end if either side disconnects or quits the game for whatever reason. This means that yes, you can’t resume an online match if your co-op partner ends up jumping out, and you’ll have to restart the whole stage from the start. This is just a baffling flaw, one that I really hope gets fixed ASAP, since it cripples a great idea if you’re playing with randoms, making it far more practical to play with your friends in the main campaign.

Last but not least are the other unlockable modes. One of them is an arcade mode, which disables continuing and requires that you play through the entire game in one sitting on any difficulty, and the other is a self-explanatory boss rush, complete with online leaderboard support. The arcade mode is a pretty fun experience, even if it unfortunately lacks the local hi-score leaderboards from the original three games, meaning that you can’t use this as a score chasing experience like the original trilogy, but rather an extra challenge that I feel works well for those who have mastered the flow of the game in any of the difficulties.

Likewise, the Boss Rush is also another challenge mode, tasking you with tackling each of the stage bosses one after another in succession. While I found the concept neat, I couldn’t help but feel this would work better in co-op, which I’m unable to do at the moment, so I didn’t really get far in this.

In conclusion, Streets of Rage 4 might honestly be the best retro revival I’ve ever played: While I sang praises for Double Dragon IV a few years back for having fun co-op and some interesting levels, it was a game that I quickly forgot about in favor of older entries, to the point that I now feel that I was too generous to that game.

But Streets of Rage 4? No, it’s the real deal, and a much, much more memorable game that not only serves as a satisfying sequel, but a nearly perfect tribute to the entire franchise. With outstanding music that rival the original OSTs in some spots, the option to play with retro BGM that includes some of the underrated 8-bit tracks from the series, nearly every 16-Bit character in the franchise available to unlock as fully playable characters, several online leaderboards and a ranking system for scorechasing action, and bonus modes that encourage further replays of the campaign, SOR4 is definitely a high quality sequel worth checking out, and feels like a proper love letter rather than just a void filler.

When the only gripes I have are some online flaws and a bit of lacking variety with certain enemy types, that’s pretty much a good sign that the game is solid all around. Still a bummer that the online situation isn’t fixed yet, but at the very least, local-play and the 1v1 battle modes are still absolutely worth your time, and I cannot recommend this game enough. It just misses the bar for being a perfect game in my book, but I still consider this to be the best in the SOR series, proving that you can return to an old franchise and make it even better.