Thanks to Lightwood Games for the review code

Similar to the old, Wii U Era Lightwood games I covered, One Word with POWGI goes for a similar look and feel, and probably runs on the same engine. The UI gets the job done, the words and letters are very easy to see thankfully, and the music is as repetitive and dull as I remember those games being. Still, everything works and looks fine, even if the presentation isn’t that updated.

One Word by POWGI is a crossword puzzle collection, tasking you with filling in the blanks and finding the words that belong to famous quotes, one at a time. These quotes belong to a variety of people, including some famous world leaders, celebs, and er, definitely not famous or good people. It’s a weird assortment to choose from, but it all works out and the controls are simple, using the left stick and the A button to highlight the lines of your choice. Each person has multiple words, and each word is an individual puzzle, forming a quote at the very end. 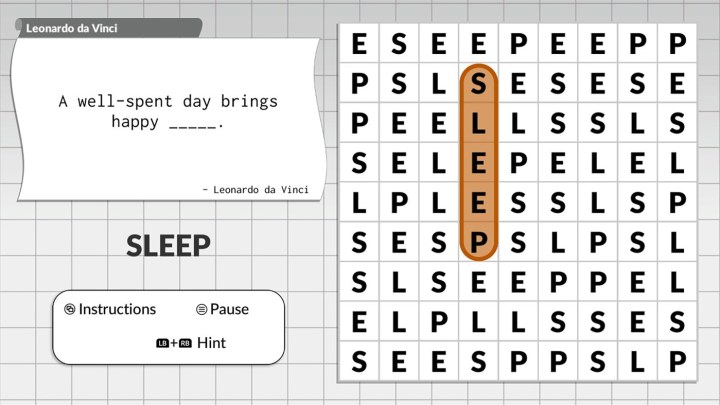 And, that’s the entirety to One Word. Hundreds of words to find, all done through the same methods and in whichever order you please, being able to go at your own pace and take breaks between every word in a quote, if you feel inclined to jump to another person or finish it later. The simplicity is honestly to a fault, since it can get rather boring after finishing a few quotes, and being on a console doesn’t feel quite right for this game. The lack of quick resume on Series X also hurts a bit, since that would help with the pick-up and play aspect a bit more here.

There are achievements to get, but they’re only for finishing certain quotes, so if you’re an achievement hunter you could just go after those quotes only and 100% that in a hour or so, even though there are hundreds of words to still solve. Like I said, the game’s fine, but it doesn’t have much substance or really, any sort of personality. Even the difficulty is all over the place, with some boards going from small to big in the span of a single quote, and thus, the difficulty doesn’t gradually increase as you’d expect these games to do.

In conclusion, One Word by Powgi is yet another crossword game from Lightwood, and while the one word per board focus may seem great for pick up and play, unfortunately I couldn’t say they felt that different from your typical crossword puzzle, especially when the boards vary wildly in size and thus, the difficulty of the puzzles is all over the place. It’s fine for crossword fans wanting every possible puzzle imaginable, but otherwise, you’re better off just getting one of the more content-packed collections from lightwood instead.