Thanks to PM Studios for the review code

This game is all about style, and being a music game, the tracklist here is packed full of it: energetic songs, mellow songs, and some really darn good vocal tracks lead to a pretty enjoyable tracklist, though of course, like with any music game, you’ll also get some songs that just may not do it for you personally, and that was my case here. For every excellent, energy-filled song I played, there was at least 3 or 4 per chapter I ignored due to them being uninteresting. And since this game doesn’t have all the songs unlocked from the start, you’ll have to play some songs you may not like to get to the ones you’ll want to constantly replay.

It’s all up to personal preference, but overall the game did a decent job with the song selection for me, and the interface is really suitable for both touch and console play, which I didn’t find to be the case with VOEZ, which felt and looked clunky to play with buttons.

Cytus Alpha is a rhythm game packed with over a hundred songs, gradually unlocked as you clear the game’s main chapters, which each contain their own batch of songs. The main rhythmic gameplay is rather simple and can use either the touch screen or buttons, but I actually felt really comfortable using the buttons and vastly preferred them as a result, especially for handling the multi-touch actions the songs will throw at you.

These notes can appear multiple times during the metronome’s transition, so you’ll have to make use of both your hands to catch them: my prefered way is by using the D-Buttons on the left side and the face buttons on the right to go after normal and hold notes, while using the left shoulder button for any crazy arrow notes that are thrown in the mix.

It can get hectic, especially on the higher difficulties, so focus is key in order to survive the stage (indicated by a number between 1 and 9, varying on the song, so even a “hard” song that’s only at 5 isn’t as tough as an “Easy” song on 6), and even more so if you desire a coveted perfect chain. Still, once you find a song you like and clear it, you can rank on the leaderboards, (though it’s not as if you can get any higher than #1 if you get a perfect chain, so I don’t think these have much of a point to be blunt) and work towards unlocking the next chapter and other batches of songs. Rinse and repeat, and that’s how you get to enjoy Cytus’ content. 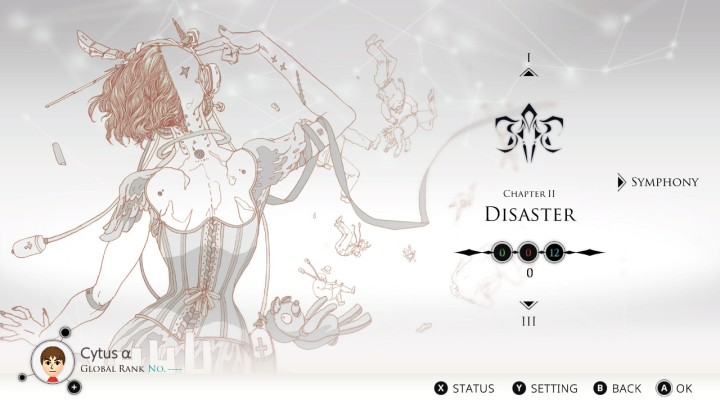 The main game mode is indeed just that game loop of going through each chapter, playing a certain amount of songs and clearing them, and unlocking the next batches of story (the little uninteresting lore there is here) and songs. While I do kinda wish all songs were available from the start, I at least do like that each chapter managed to have several songs I enjoyed a lot more than I expected, as noted earlier, so I think if you end up liking what you hear from this game’s OST online, you’ll definitely enjoy playing them in the game itself, or even stumbling upon new favorites that grow on you!

Next up is the secondary mode of the game, one which I had a lot of fun with when I originally played the game for this very review back in 2019 before life hit me, and that’s the versus mode: Here, you scorechase a song against and opponent, and it was super fun back then, since you can adjust the difficulty level to your liking and have the game throw songs at you accordingly, and you can even unlock some of the content here a lot faster by winning versus matches!

Unfortunately in 2021, my attempts to find any sort of matchmaking failed: entering via the menu failed and just sent me to a solo performance of a song, which didn’t count as a versus win as a result, and using the matchmaking toggle within the chapter didn’t do much either. It was pretty upsetting and not at all the fault of the game, but rather just the sad nature of a quieting community of players online. Still, this is definitely the biggest highlight of the game by far, and I really really wish this online mode was more active, as then I’d have been more eager to no doubt pour dozens of hours in it alone due to how excellent the small taste of it was.

In conclusion, Cytus a ended up being pretty fun for a rhythm game, even though the track list wasn’t completely my cup of tea. With a comfy control scheme, an excellent and addicting versus mode, and a plentiful amount of songs to play thanks to free updates and a lengthy campaign, there’s plenty of fun musical content to enjoy for fans of the genre.

All in all, whether you like this game or not will mainly depend on if you vibe with the game’s OST and don’t mind the inactive online mode. For me personally, the track list was just OK, but the solid gameplay still made it worth checking out and I absolutely wouldn’t mind seeing future entries in this series with more songs and more active online modes, though you’ll definitely get your money’s worth of content with this entry nevertheless.

It’s a shame I wasn’t able to get any online versus matches set up here in 2021, as when I played them in 2019 they were immensely fun, and still easily the best part of the experience if you can get it going. Nevertheless, PM Studios and Rayark nail it with yet another fun music game!