Thanks to Abylight Studios for the review code

In a ruined world, you take control of the Drifter, a warrior who sets out on a quest to discover himself and see what’s going on in this strange world that is under attack. Help him discover some ancient secrets and find out how to save the world!

Hyper Light Drifter continues the long-standing tradition of giving these indie titles a pixel art look. the sprites are pretty and the animation quality was a lot better than I had expected, leading to a world that feels alive despite the abstract look the game has going for it!

The environmental detail is really good, and the way the shading is done at points help to give HLD a distinctive style at the very least, blending nicely with the abstract-ness of it all. If you’ve seen any sort of game with pixel art and a shading style similar to this like Kamiko, then this is the very game that inspired it.

As for the sound, not much really to say, as the music manages to just fit as great ambient noise, due to the OST focusing more on being a background element for the mysterious and eerie moments this game has. It may not end up being as memorable this way, but it still leaves a very good impression, and the sound effects are excellent and satisfying.

As the drifter, you must set out across a big overhead world to restore it. Being an action RPG of sorts, the usual drills apply, with you being able to attack and explore the world, while also having to deal with other aspects such as secret finding, dodging, and using a projectile shot as a secondary attack. Think the top-down exploration of Zelda mixed with more careful combat required. 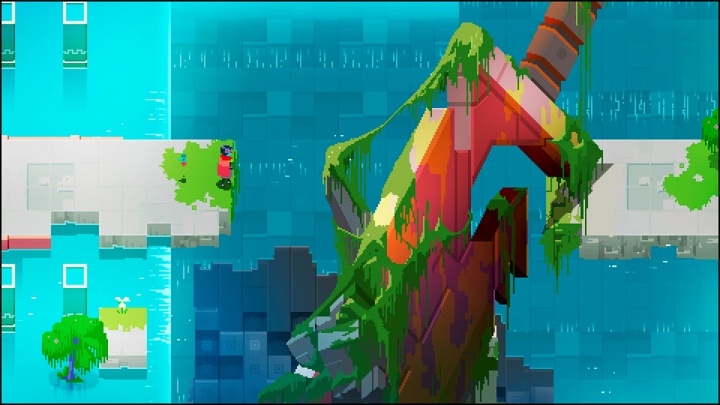 The great news is that Hyper Light Drifter gives you a decent amount of freedom from the getgo, and after the initial town, you’re free to goof off and make your own path to the main points. You’ll still need upgrades to progress in certain areas and find certain items of course, but otherwise you have a surprising amount of freedom, which adds to a lot of fun. The controls are fairly simple too, with a simple dodge, analyze, and attack layout on the face buttons, a health injection with the L button, and the shoulder buttons being used to lock and aim your projectile weapon, leading to a very comfy control setup that feels outstanding with the Switch Pro Controller. 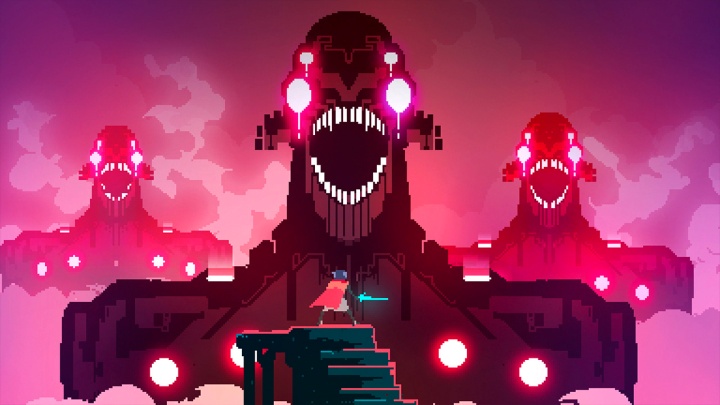 Thus, due to this non-linearity, a lot of the fun from HLD comes from exploring at your own pace and finding out what to do next! Granted, that also means you may run into a difficulty spike or tougher enemies if you end up going where you aren’t meant to, or you may outright run into a dead end due to lacking something you are supposed to have. Whatever the case, there’s thankfully a fast travel system to help you out, and each area still offers secrets such as health extensions that won’t make detours a total waste of time. The melee combat is surprisingly fun too, with dodging being a key factor in avoiding enemy attacks right as they wind up: thus, each enemy has to be read carefully, and tougher enemies require a ton of careful planning.

Since the game autosaves pretty frequently, death isn’t always that annoying, since you get sent back to the prior autosave when doing so. That being said, this game can still be pretty tough, with enemy waves that’ll test your item management and dodging skills quite a lot, but they feel super satisfying once you finally conquer them. Thus, the game may feel like it has a bit of a barrier of entry to it, though the good news is there are two difficulty modes available, one of which helps ease the difficulty a bit.

Speaking of those modes, they impact a surprising aspect added to this release of the game, one that’s super welcome, which is the addition of in-game achievements! The easier difficulty will disable some of these, making the normal mode the preferable method for those who want to 100% properly, but it’s really admirable that all the content from the other versions including these is in this Special Edition.

That’s not the only addition too, as a brand new boss, and other minor additions were thrown in, the biggest of which being two-player co-op! It’s not really that notable, but a second hand during combat waves is still helpful if you’re stuck on a particular wave, and my friend and I got a good hour of fun out of it at least. Considering these additions are still exclusive to the Switch version of the game, they may very well be a reason to double dip on this game even if you beat it elsewhere, and honestly negates the pain of the Wii U version’s cancellation.

In conclusion, Hyper Light Drifter is a fun action RPG, though the barrier to entry is a bit higher than you may be expecting, with a lot of slow starting pains and the non-linearity that take a bit to get used to. Though once you adapt and find a good route, the combat becomes incredibly satisfying and exploration is a joy! The new two-player co-op mode is a fun addition as well, even though it’s far from the ideal way to play the game.

Along with a good amount of in-game achievements for replay value, HLD is just a fun, replayable action game that all fans of Zelda should at least give a try, even if it may not click right away. With a physical version now available, there’s no better time to give this a go if you haven’t already, or even if you played this on other consoles, since this still has quite a lot of exclusive content only available here. For $20 digitally, it might be a tough buy, but the physical version is definitely easier to recommend due to the cool goodies. Whichever way you play, you’ll have a pretty good time if you just focus on exploring and having fun!

I give Hyper Light Drifter – Special Edition an 8 out of 10.