Thanks to ININ Games for the review code

In this Mega Drive classic from Masaya, you take control of someone who steals an experimental ship, which is the only weapon capable of breaking into enemy territory and pushing back in this fierce galactic war! Cutscenes appear now and then, and for the first time ever they’re all translated!

Per the prior Ratalaika Games retro port traditions, you have a very similar assortment of features, with some new bonuses to boot! Screen size and filter options are back as expected, but now there’s three entirely separate game modes, one of which, the modern style, changing the nature of the game’s text and some in-game assets.

While the Vintage mode is 1:1 the original Genesis ROM, original text font in Japanese and all, the modern mode actually replaces the text with some sort of overlaid font, both in Japanese and English.

This means that for the first time ever, all the cutscene text is in english, and it’s pretty well translated, too! Everything else that was originally in english like UI elements and powerup descriptions are left as-is, and even toggling it to Japanese will just change the language, still being in the overlay font. I did notice a bit of a text cutoff in certain scenes when playing in pixel perfect mode with a border applied, though disabling it causes this to not be as noticable.

For the game itself, you have pretty impressive sprites for the time, with fast scrolling and lots of action going on without too much slowdown, at least less than you’d expect for a game like this. Even the unlockable Mania mode doesn’t seem to bog things down too much, and the pace just leads to being fun overall, with cool backgrounds, (outside of a boring asteroid field to start things off) great music, and even the occasional voice clip, albeit compressed.

Gleylancer, as noted before, comes with three different modes of play: there’s the modern mode with the aforementioned english translation and some QOL features, the vintage mode with the original Genesis rom, and a “Cheat” mode, which is basically a mode with the options to enter all the cheat codes the original game had to offer, ranging from stage selects to invincibility options.

Whichever mode you pick, the goal of the game is pretty typical. You take control of your ship and can adjust between four different speed levels, not unlike Thunder Force games, and you collect powerups dropped by enemies, defeating them in order to reach the end boss of each stage and destroy it before it destroys you.

The gimmick here in Gleylancer comes from how these powerups follow you, since they show up in a pod formation that you can select before starting the game. Whether it’s a traditional trail, a reverse direction, a Gradius-esque Option trail, or even a handy rolling formation, there’s quite a few options to play around with, so experimenting with them until you find your favorite is the way to go. 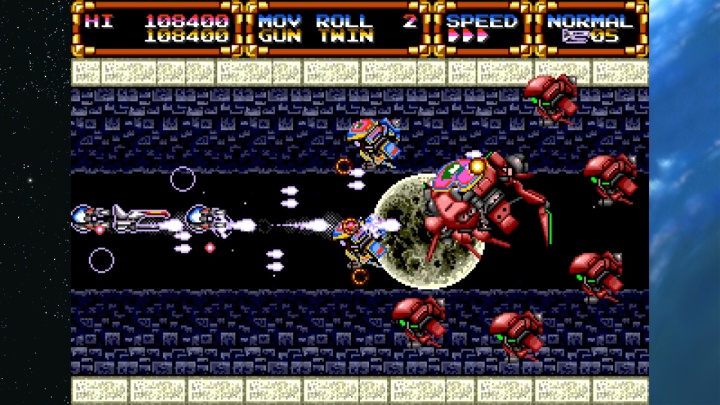 Luckily, Modern mode is here to make that a lot easier! Not only can you use the shoulder buttons to adjust the ship speed much easier than before, (rather than having to cycle through all the time) but you can even change your formation with the press of a button, making experimenting incredibly easy! You can even aim your weapons with the right stick, turning Gleylancer into a twin-stick ordeal if you wish to do so.

As a result, this even changes up the gameplay a bit, since you may find yourself using one formation for one stage, then switching to a better suited one for the following one, or just using the right aim for better accuracy leading to a bit of extra strategy than there originally was! There’s even a handy rewind feature, which you can use to just blaze through the main story comfortably with all of these combined. 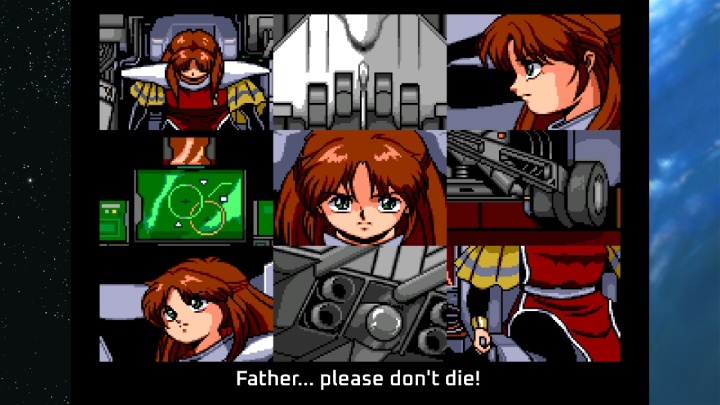 Still, the vintage mode is also worth playing, since the game as originally intended is just as fun, and works as a cool score chaser game to boot! In fact, the modern mode saves your high scores to SRAM, meaning that you don’t ever need to save state the local leaderboard if you’re up for playing the game that way and going after score. (of course, you’ll still need to use save states to save the leaderboard in vintage mode) 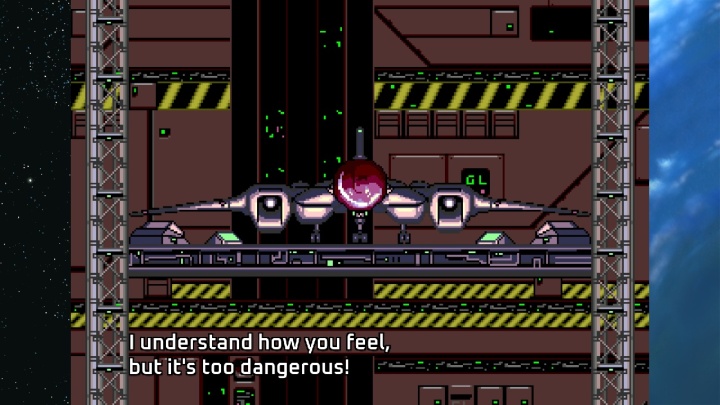 Here in vintage, you’ll have to deal with the checkpoint system, as rewind is no longer available, forcing you to put the skills you practice in the modern mode to the test, sticking to the original control scheme of three buttons! This is where I busted out my 8Bitdo M30, and lemme tell you, it was an absolute blissful experience playing this mode with something akin to the original controller, and I feel when the Sega Genesis Online controller is released, this port would be a great fit for it. Everything just felt super responsive and while the game does offer varying difficulty modes (including an unlockable Mania difficulty), the overall experience is one I found to be doable even in vintage mode as long as you practice, with Mania being the closest to insanity any of these settings would provide, so you could honestly have a good shot at beating the game’s easy or normal difficulties on vintage mode, without even going to Modern!

In conclusion, Gleylancer is an outstanding port of a fun Mega Drive shooter, presented with pretty much every quality of life feature you could possibly ask for! From SRAM Hi-Score saving, to dual-stick controls, to weapon and speed swapping on the fly, this revision is easily the best and most accessible Gleylancer has ever been by far. Considering how the original version was known for being ludicrously expensive, (and even the recent Columbus Circle reprint ended up trending that way) it is just so good to have this readily available once again.

Considering how the original unaltered version is also here for purist play, this shows just how well Ratalaika’s ports of retro games are getting, since they’re just becoming better and better with each release, and prove to not only offer a definitive QOL experience for newcomers, but also a great way of preserving the original, leading to plenty of ways to play and replay this fun gem. Considering that it costs even less than it did on Wii Virtual Console, yet includes more, this is a must-buy for retro fanatics, and I’m honestly quite impressed to see so much packed in this seemingly random port of a game: it definitely has more than meets the eye.