In this brawler, you take control of Kobayashi, who notices a ton of freaky aliens causing havoc, and when a time-traveler from the future comes to warn him about their evil antics, he teams up to explore the city and stop this bizarre crime wave from time! The dialogue in this game’s story is honest to god, probably some of the most poorly translated text I’ve seen in a very long time, so you may not be able to care or understand what’s going on besides that bit… At all.

Shockingly enough, this game does not go for the same tired and true 8-bit style that most Arc-published Kunio games have gone for in the past decade. Indeed, like River City Girls, it goes for a 16-bit look that’s more original, one that I found to be a very admirable use of pixel-art that still maintains a lot of the style of the Kunio series, even if I find it to pale a bit compared to Wayforward’s offering. The game also has its own share of character art for dialogue scenes, with a bit of weird shading going on that makes the whole look manga-like, for better or worse. In my view, I feel that it goes a little bit too hard on the serious tone, with some characters looking way weirder than they do in the excellent spritework.

The music is equally weird, also ditching the general chiptune vibes, but offering modern takes that don’t quite manage to stick in your head. Even when coming right back to this game for the purposes of review, I failed to remember any of the songs from my prior attempts at a playthrough. There’s even voice acting here, albeit all in Japanese, and it holds up decently for the most part, and some parts of dialogue appear to even be fully voiced.

Stay Cool is a typical take on the series: a side scrolling belt action game, with the ability to have a local co-op buddy join your game at any time. You have a series of basic moves and combos, and slowly uncover more as you explore more of the crazy world and defeat all sorts of alien foes. As a matter of fact, even without a local co-op partner, this is a two-player romp through and through, since the AI will take over for whoever you assigned as your partner character.

You have a spirit gauge, which can be used to pull off stronger moves by holding the button down, depending on how full it is. Some of these moves really pack a punch and can help turn the tide of battle, while others can even be used for more amusing purposes, such as Kunio’s basic spirit move that turns him into an airborne spinning ball, which you can use to outright fly over pitfalls. The Spirit Meter recharges over time, so you don’t have to worry about grinding for refills. 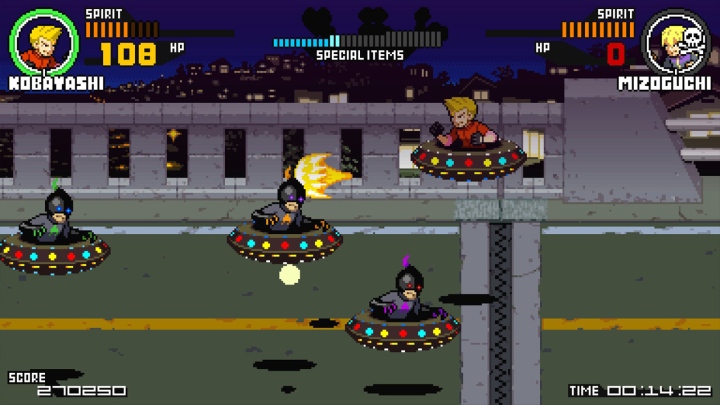 What you will have to worry about grinding, is progressing through the game. For my first attempt at the game with a IRL friend, we were completely lost at what to do, with the two of us aimlessly wandering around the entire map, unsure where to go or what to find, before we suddenly ran into a boss who claimed to be the leader of a faction of enemies, and defeated him. It was only during my recent, solo attempts to play through this game more for the review that I finally realized like an idiot that the main goal of Stay Cool is not just to simply make it to certain locations on the map, like older Kunio action games, but rather, to beat up a certain amount of colored enemies in specific parts of town to summon their leader for a fight. You can tell if the enemies in question are what you need based on if they wear a goofy sentai-looking suit, as shown in a menu. 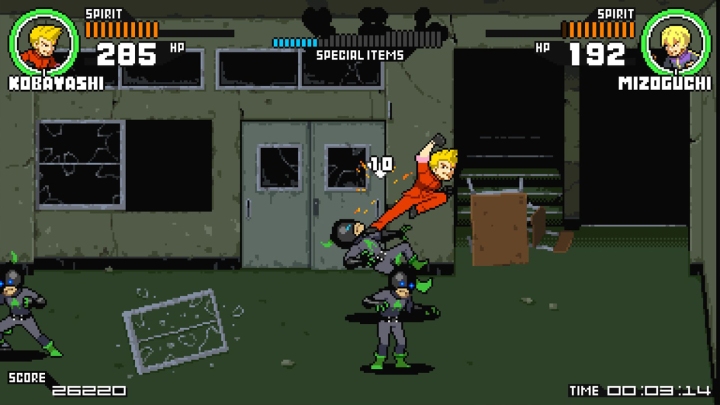 Unfortunately, that led to me getting the grim realization on just how grindy Stay Cool is: go to one area, find the enemies, beat them up, leave and repeat until special number shows up to summon a boss, then try to beat the boss or get utterly destroyed by him, and repeating the cycle anew until the final boss is summoned. It honestly is really striking as to how inconsistent this game feels with balancing, since some bosses are far, far easier than others, but if you end up getting one that hits like a tank too early, then it’s an outright nightmare to get anywhere in this game.

Indeed, I made the terrible mistake of summoning the Purple boss, which was pretty simple and I nearly defeated, only to go off the map a bit, beat up some red folks in my way, and summon the red boss who was way more aggressive, difficult, and tough to beat, with no way to find the purple guy again. (I assume he comes back into play when I defeat the other bosses or beat up more purple foes) Moments like these are what make Stay Cool far, far less fun than it could have been if the game was more clear on what to do and if the game had a better loop going for it.

To make this even more ridiculous, I found myself stuck and unable to do much to enemies at all… Until I booted up the game’s title screen, messed with options, and found out the way to level up my characters and their HP was in that menu. Yes, an out of the way menu option on the title screen appears to be the main way to actually power up your characters, with no in-game EXP level ups or anything of that sort. I wouldn’t even be surprised if some go through the entire game without knowing that you can level up because of this weird design choice. 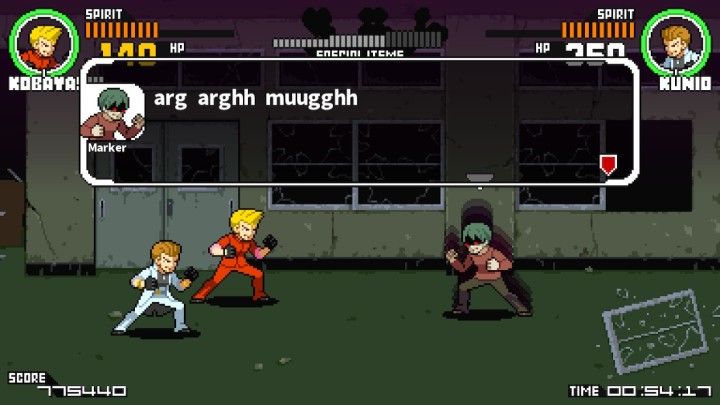 I get that it clearly seems the developers wanted to throw back to the nature of the original RCR, where you could go pretty openly around the game’s map but still had to do specific things to trigger boss fights, but unlike that game which offered a pretty reasonable difficulty balance, Stay Cool is just all over the place: it also doesn’t help that Kobayashi is mandated on the player no matter what: even if you wanna play as Kunio in 1P, you have to assign Kobayashi to the second player slot, and he has to be alive at all times. Yes, this means that if the CPU is controlling him and does a stupid jump into a pit and dies, you still get a game over! While it’s a lot more easier to deal with in local co-op, this silly mandate kinda makes playing as anyone besides him not at all practical when solo, especially since the AI partner isn’t the brightest bulb out there.

In conclusion, Stay Cool is a pretty average brawler, and makes for a decently enjoyable local co-op romp with a friend, but compared to River City Girls and even a few of the 3DS Kunio games, it just doesn’t quite nail all the fun factors of the series, and struggles to be very engaging as a solo adventure. The plot is completely crazy (for better or worse), the combat is decently fun, but nothing too surprising, and the maze-like structure can get rather confusing in no time., along with the aggravating goose chase of finding specific enemies and summoning their leader.

Stay Cool definitely deserves props for looking distinct in a series that overdoes the same art style to no end, but otherwise, I can’t say this River City Ransom story is a must-own by any means, outside of local co-op shenanigans or for the sake of completing the series on your Switch. It’s a shame, since some aspects of this game I really do dig, from how the game looks, the spirit attacks, the multiple playable characters, but when the core loop is just so repetitive and confusing, this time travel story is just a weird paradox that is best left unsolved, and I feel that they could very well use this promising game engine for a game that’s far, far better executed.

I give Stay Cool, Kobayashi-San! A River City Ransom Story a 5 out of 10.