Thanks to CIRCLE for the review code

Taking place an undisclosed amount of time after the end of the original, you are awakened on a new quest to find the three fairies once again, all while trying to solve the mystery of the Ashen World!

While the art style initially appears to be unchanged from the first Fairune title, there are still a few improvements. For one thing, the map is now on the bottom screen instead of the top screen, while the menus are much cleaner than before. Sadly the cool scanline effect you could turn on in the original is removed (likely because the action takes place on the top now) but overall it still has the same high quality pixel art as before. 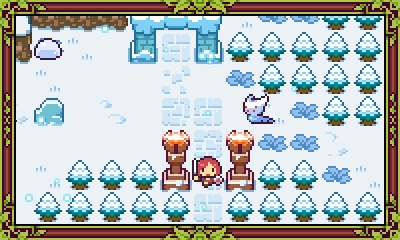 The strongest point of the original returns in the sequel, with new iPod-worthy tracks to listen to! Just like before the music is high quality and is reminiscent of the PC-88 computer, and is definitely worth a download with special mention going to the Ashen World and the Snow Area themes.

Being influenced by PC88 Roguelikes such as Hydlide and Ys, Fairune 2 keeps the same combat system that its predecessor had, in that you attack enemies by moving towards them, exchanging blows to gain experience and level up. Every enemy in the game (outside of the final bosses) will die in one hit, but depending on their strength and your level you’ll take either no damage at all or a lot. Therefore, looking in the codex to see what enemies they recommend for level grinding is key to gaining strength, as a death will send you all the way back to the first area of the game. (but thankfully nothing is lost as it autosaves)

Just like before, the main objective of the story is to explore different areas to find the three fairies and beat the game, however this time around the game was expanded to be on a much bigger scale. While you could 100% the first game in under three hours on your first try, Fairune 2 will take around five or six hours to 100% on your first try, thanks to the bigger worlds, complicated puzzles and the occasional enemy swarm to fight. There’s even special items that you’ll need to get this time around in order to access certain parts of the map, making it like a pseudo-metroidvania of sorts. Overall, it keeps the same gameplay as the original but expands upon it.

While the first game was a quick, addicting mini RPG with a few achievements to encourage replay value, Fairune 2 expands it into a complete adventure, making the task of 100% take a bit longer than it did in the first title. However, with a bigger game comes a bigger price tag, and while I do believe its definitely worth the $7 it’s going for, I can’t help but feel that making it a budget range game like the first one would have made it an easier purchase. Overall challenging puzzles, a decent length along with amazing music make Fairune 2 a worthy sequel and worthy of a recommendation for fans of action RPGs/adventure games. I give Fairune 2 a 9 out of 10.