Thanks to 13AM Games for the review code

An evil pirate has kidnapped the townsfolk and trapped them in bubbles! As Pete Jr you must set out to defeat the Bubble Pirate and free the townsfolk! Due to the arcade nature of this game, that’s as much story as you’ll get.

When you first boot up the game, you have two display options to choose from; a pretty ugly zoom option where the pixels are blurry and take up the width of the top screen, or the more reasonable standard resolution, where a fancy (and customizable) faceplate surrounds the playing field, making the in-game system look like a mix between a WonderSwan and a Game Boy. During the main game itself, the sprites are well animated and the screen color looks very reminiscent of an old Game Boy, thankfully without the darkened screen and blur problems.

With some unlockable color palettes and faceplates, there are a few more ways to have your in-game system look as fancy as can be, although thankfully the default settings work fine. Unfortunately, there’s little in regards to the bottom screen which is just nothing but stock artwork that rotates from time to time.

There are some chiptune themes that play during each run of the game, but to be perfectly honest, not one song was memorable enough for me to even remember one month after playing the game for the last time. If I can’t remember a simplistic song that well, then something is not clicking with this OST, though there are extra songs that you can purchase through the in-game shop if you so desire (but they cost a ton of in-game currency)

From the moment I started my first run of the normal mode I was able to notice the striking similarities with the popular Capcom arcade game Buster Bros. (also known as Pang) Just like in that arcade classic, the main goal of Pirate Pop Plus is to shoot the incoming bubbles with your trusty hook, splitting them into two as you work to eliminate each and every one of them. 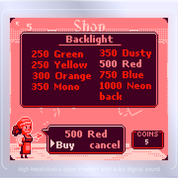 Sometimes you’ll be given gold coins (to buy extra things in the main menu) or powerups that can give you a helpful boost, whether it’s from shifting gravity around (allowing for you to land on top of the bubbles and pop them with your feet, leading to super easy combos) to shooting multiple anchors at once, these powerups don’t tend to last for long and run out quickly. 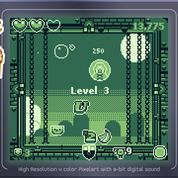 Outside of an expert difficulty (Which requires 25 coins to even play) what I just described to you is the entirety of the game, only increasing in difficulty depending on how well you do. There’s little in the way of features, and even for an arcade throwback that’s sad to see.

While I tend to absolutely adore arcade-style games that do this if they engage me, Pirate Pop Plus just wasn’t able to do that. The entire time I played the normal mode it felt like a dull, boring game where the only addicting moments came from the powerups, and it never seems to end or get any better. It’s a never ending struggle of dullness that I never wanted to play for long, except for when I grinded enough coins to play the Expert mode, which is when the game actually gets fast-paced and fun. Unfortunately, due to the amount of time you’ll be spending in the boring as sin normal difficulty just to get enough coins to try the expert mode again, it’ll take way too long for you to get those few minutes of fun. Sure, 13AM Games added a ton of extra visual touches such as the wide variety of unlockable faceplates, stickers and extra characters, but if it takes hours of boredom to even get enough coins to purchase those in-game items, what’s the point?

I give Pirate Pop Plus a 4 out of 10, and I honestly can’t recommend it to anyone except those with incredible patience. At the very least, the Wii U/New 3DS versions are cross buy so you don’t have to risk blowing your money on a system that may not be suited for this game, (even though in all honesty they play fine from a technical standpoint on both) and it won’t break the bank if you do decide to take the risk.