Thanks to Elden Pixels for the review code

In the land of Alwa, a mysterious mage named Vicar has taken over the land and turned it into a monster filled world. In desperation, a young girl named Zoe is sent in order to gain the powers needed to take on the protectors and restore the land!

While I have shown some dissent towards NES themed games, (Mostly due to how many I’ve played recently) Alwa’s Awakening manages to feel a lot closer to an actual NES title than most of those “inspired” games, mainly due to the color palette being nearly identical (if not the exact same) as a lot of early 90’s NES games, along with the fact that the background music is composed with a legitimate NES soundfont. 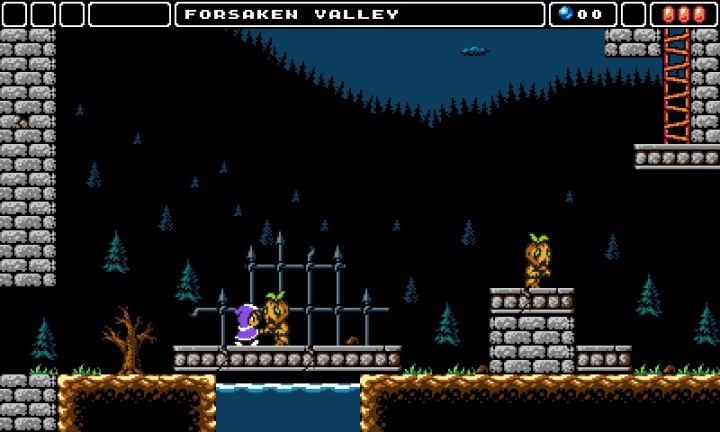 Unlike Double Dragon IV which tried to add clashing backgrounds with the NES sprites, pretty much every background in this game looks and feels right at home, making me ponder if this game could actually run on a NES via a homebrew cart.

Despite the retro visuals, Alwa’s Awakening plays a lot like modern Metroidvania titles such as Guacamelee and Ninja Smasher, with the main objective of the game being to defeat all five bosses while exploring the many caverns and dungeons along the way. It’s a fairly standard formula that doesn’t try to innovate whatsoever, but the execution is done at a pace reasonable enough that there’s little to no padding to speak of.

Upon staring up a new game, Zoe has no special abilities outside of a jump, although that’ll quickly chance when she gains a magic wand that can be upgraded to learn some magic spells, such as a green block that substitutes for an extra platform, a blue bubble that lets her reach higher platforms and a lightning bolt that deals a lot of damage to enemies and opens doors. Each of these magic skills are found in the major dungeons such as Void Tower and Shrine of the Sea Monk, and these dungeons can take a good 20-30 minutes to complete on your first try due to how spacious they are.

While it may sound like getting through these dungeons can be a drag, it actually works to the game’s benefit by encouraging players to go through a dungeon long enough to grab the magic spell before exiting out to explore the outer areas with your newfound power, as each of the abilities can be used to find hidden blue orbs that can upgrade your magic power if you collect enough of them, which comes in handy near the end of the game where the game becomes more difficult. If you plan things out accordingly, you can even fight the bosses out of order, just like early 3D Zelda titles allowed you to do if you took the dungeon item and left. 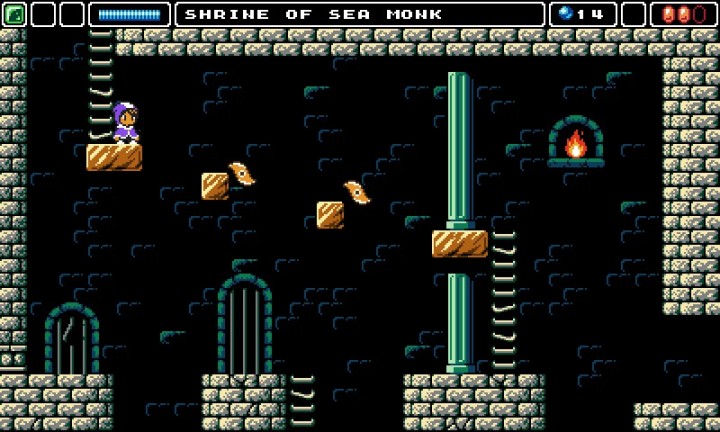 Speaking of the overall difficulty, despite the gradual increase I mentioned, the game isn’t too terribly challenging if you have any experience with classic NES platformers, since the controls are easy to get used to and quick to master, and the bosses are standard “memorize pattern and attack them when possible” fare. If there’s one fault regarding the difficulty, however then it would be the fact that in some late-game dungeons dying at the boss can lead to a long walk back from the checkpoint before being able to fight it again, which can get a bit annoying if you happen to be stuck on a boss.

In conclusion, Alwa’s Awakening is an incredibly accurate throwback to the NES games of old, and despite it focusing a lot on authenticity rather than trying anything new, it manages to hit all the right notes for a Metroidvania. With a lovely soundtrack, several routes to take on your journey and more, Alwa’s Awakening managed to engage me more than I was expecting it to, and for the $10 price tag I can easily recommend this without hesitation to fans of Metroidvania titles. Really the only thing that holds this game back from being a perfect example of the genre are the infrequent checkpoints in dungeons and the focus on instant-death obstacles near the end of the game, which can frustrate those who are used to the more generous nature of modern Metroidvania games. Still, this is a very solid adventure game that you don’t want to miss out on! I give Alwa’s Awakening a 9 out of 10.