Thanks to Upfall Studios for the review code

Another retro throwback is here, which means more pixel art. When it comes to the quality of the sprites, there’s little to comment on since I’ve already done so for dozens of other games that used pixel art, with the only thing worth mentioning is that the four playable classes are very colorful in design, and that the overall feel of the game (being a top-down dungeon crawler) is VERY similar to Crypt of The Necrodancer, which is probably why the main character from that game is unlockable. Some of the dungeon floor colors are also rather nice on the eyes, with my favorite being the floor design with moss growing on the top of the walls, since it comes off as an aging ruin instead of just a generic floor with no implied backstory behind it. 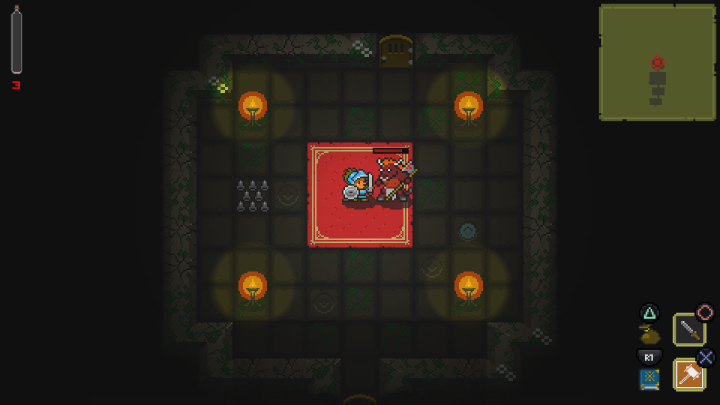 Luckily, the music stands out a lot more than the visuals, with the main soundtrack lacking any sort of retro instruments whatsoever, sticking with a traditional soundtrack. Since the dungeon floors are randomized, the developer got the smart idea to randomize which music will play when you go up or down a floor in one of the dungeons, which prevents the soundtrack from feeling repetitive or dragging on a lot longer than it should, although this can still happen if you stick around on the same floor for a while to complete sidequests or level up. (Although going down a floor and returning to the one you were just on will not cause this to happen, thankfully.)

Out of all the tracks available in the game, the one I found the most enjoyable was an eerie yet relaxing flute theme that plays from time to time on random floors. It sounds a lot lie a PMD song to me, which especially fits considering the genre of this very game. In fact, I wish there was an option to just have that song play and nothing else, since that was one track I don’t mind hearing over and over again.

After choosing from one of several dungeon and class options upon making a new game, you’re thrown into the dungeon, with the main goal being to move around and explore every nook and cranny of the floors to find gold, level up and get to the very bottom of the dungeon without dying. That’s easier said than done though, even on the first dungeon with only seven floors. While you may be able to breeze through the first few floors while dodging enemies, you’ll come to quickly regret it once you reach the fourth or fifth floor and run into a powerful enemy that’ll destroy you in one hit. And since this game has permadeath, you’ll have to restart that entire dungeon from square one, with a new random layout to boot! 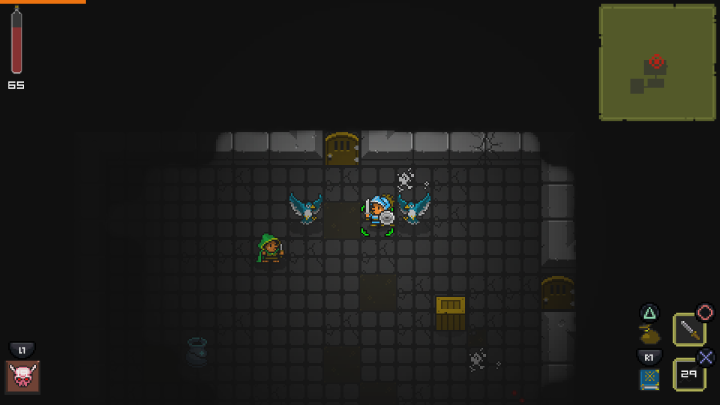 While I do hate permadeath in some games, I actually feel that it works well here, since the dungeons don’t have that many floors and this is a game that encourages you to replay it with the different classes to begin with. The two dungeons available may only have a couple of floors, but they make up for the low number by making said floors gigantic labyrinths with plenty of enemies to take on. Defeating these enemies is essential to clearing a dungeon, since you’ll gain experience with each defeated enemy, along with the chance of getting a dropped item or two that can come in handy later on. (Either a colored gem to sell to the shopkeeper that you’ll run across from time to time, or the essential health items.) 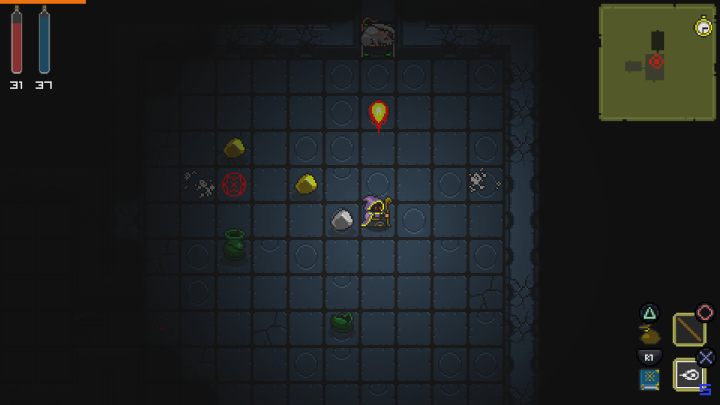 That doesn’t mean Quest of Dungeons is just about grinding experience and reaching the bottom floor, since there are a few other things you can do in this game to help you on your quest. Sidequests are available for you to take on, and these can range from finding a random item hidden away in a specific part of a floor, to finding a dangerous boss enemy and taking it out. Clearing these is strongly recommended, since not only will they provide helpful EXP and gold, but they might even lead to a new skill being available for your class. It can require some backtracking, but it’s ultimately a fun little diversion that you can choose to take if you so desire. 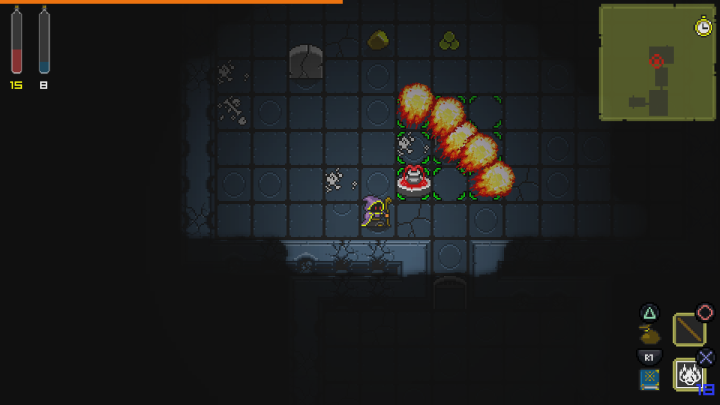 Another optional event that requires careful thought comes from the nature of some doors and chests. Certain doors and treasure chests will require specific keys in order to unlock their contents, but the problem is that these keys may be in an entirely different part of the dungeon! You may find a locked door on the very first floor, only to lack the keys required to open it until the fourth or fifth floor, meaning you’d have to hang onto these keys and go all the way back to the first floor just to open it. Same goes for certain treasure chests. In fact, you may have to do both, by opening a door that leads to one of these locked treasure chests. The path to getting the goodies inside may be a gigantic pain, but sometimes the trip can be worth it, and it’s a fun way to explore further in the dungeon if you don’t feel like going through the linear path to the boss. Just make sure to not accidentally sell your keys to the shopkeeper, since you’ll have to find that specific store again and rebuy your key if you change your mind…

In conclusion, Quest of Dungeons is a very addicting but very difficult roguelike. It’s not unfair or infuriating to play like Paranautical Activity if you take it slow, which is a relief since the game at least gives you some leeway to work with. Some classes are easier to use than others, (In my case, I stuck with the Assassin due to his long range attacks being useful for rooms filled with enemies) there are four different difficulties available, And even when you do clear all the dungeons the game has to offer, there’s still more to do in the form of the PSN Trophies, which can be very tricky to get, since some require you to create custom dungeons with very tough rules enforced.

Even if it takes you months just to beat the first dungeon, (like in my case, where I keep getting very close yet so far thanks to traps or tough boss enemies) the game can still be addicting enough to get you to try again and again. It’s not for everyone, but this was a much better roguelike than some of the recent ones I’ve had to review on this site, and I think I can safely say that I’m hooked on this game, and will continue to play it from time to time until I finally beat the game. I give Quest Of Dungeons a 7 out of 10, and I strongly recommend it to roguelike RPG fans looking for a fun challenge to get hooked on!