Thanks to VBLANK for the review code

In this love-letter to the earliest Grand Theft Auto games and the NES era, you take control of a man known only as The Player, who sets out on a mission to repair a time machine belonging to a scientist known as Doc Choc by taking on all sorts of crazy missions, odd jobs, treasure hunts and evading the cops!

Despite my usual gripes about NES inspired games, (thanks to the fact that most of them look and feel the same, as I’ve stated before) Retro City Rampage has always been a game where I felt the NES inspirations benefit the game strongly. Not only do you have a playable NES prototype version of the game hidden away in the arcade as proof of the developer’s love for the system, along with some crisp sprites, but nearly every filter, optional color scheme, and BGM tracks are throwbacks to the NES era, save for a few display options that go back to the old computers from the 90s.

Speaking of music, some of these tracks are edited versions of classic NES tunes, (A part of the “Pulsewave” theme, for instance is the intro to Mega Man 2 with a different tempo and notes, but the same soundfont) which is a nice touch that adds further authenticity to the NES era.

When you first begin the story mode, you’re immediately thrown into the action, given a few basic missions to show you some basic controls before the time travel kicks into action, sending you to era. After getting to the Doc’s lab and clearing one mission which shows you the weapon controls and has a throwback to both Metal Gear and Contra, you’re finally shown the true glory of Retro City Rampage with its open world gameplay. If you so desire, you can literally dump the story and go on all sorts of crazy adventures in the big town, either through side missions, minigames, hidden secrets or just by causing pure chaos!

There’s little to stop you from having fun with breaking the in-game law, as hijacking a random vehicle is as simple as pressing the X button while in front of one, and afterwards you can go nuts and mow over random 8-bit civilians to earn money, weapons and certain achievements if you’re skilled enough. The punishment for death in the open-world part of the game is very minor, simply stripping you of all your weapons and a few other things, but it’s quite simple to get back on the road to continue the mayhem. It’s mindless and can get repetitive, but since this isn’t really something you have to do, (you can just focus on the main story missions via the blue M icons after all) it’s completely optional. (And there are cheat codes you can activate if you want to experiment with late game stuff early, although you can’t save once you do so.)

Extras that can be accessed in the town are a few minigames that you can access by going to the arcade. For a very small fee, you can try one of four games separate from the main adventure:

Super Meal Time, a button masher that really benefits from a turbo controller like the HAYABUSA Arcade Stick or HORIPAD.

BIT TRIP. RETRO CITY: A miniature version of Bit Trip Runner with a few unique levels to take on.

VIRTUAL MEAT BOY: A rather annoying game where you control meat boy in a third person perspective as he infinitely runs forward and must dodge obstacles. This one I do not recommend due to the frustration and tediousness.

And what may be the most curious aspect of this release, ROM City Rampage, an actual prototype version of RCR that was made to run on an actual NES! It lacks sound, and it’s incredibly buggy, but rarely are beta versions ever given a chance to be made public, and the fact that you don’t need to worry about spending in-game currency if you happen to not like it is appreciated.

The last, but certainly not the least important mode to make note of are the Arcade Challenges, which give you simple and short missions to take on, from defeating a certain amount of enemies with certain weapons, going on time attack missions, along with several other types of missions, where you aim for getting a gold, silver or bronze medal depending on how well you do. These are absolutely PERFECT for portable play due to their length, and it ended up being the mode I had the most fun with in Retro City Rampage due to the addictive nature. You can even save replays of your best runs to play back later, although sadly you cannot upload them to any online leaderboard.

Considering how I already bough this game twice on Steam and the 3DS eShop, it was a no brainer that I would be interested in seeing what improvements the Switch version brought to the table. While I was always a bigger fan of goofing off in the adventure mode and causing mayhem in the other versions, something about the Switch’s ease of portability motivated me to take on more story missions than I did on the other versions, since if I was in the middle of one and had to put my switch away, I could simply go to sleep mode and come back later. 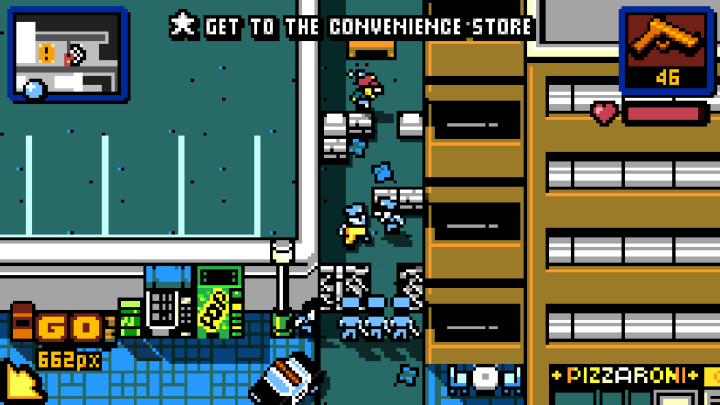 When you also take into account the fact that some minor balance changes have been made to the missions to make some of them less frustrating, (which I noticed in one early game mission that I could never do well in on any other version but I had no problems with here) then it’s pretty clear that the Switch version of Retro City Rampage DX is the definitive version. It even includes all the achievements from the other versions, so there’s no replay value lost in the transition! If you haven’t picked up this open world adventure yet, then I strongly recommend that you start on the Switch, as this is the best time to start! Heck, even if you’ve already played it on another platform, I’d recommend rebuying it on the Switch just to have an excuse to replay it all over again. I give Retro City Rampage DX a 9 out of 10.