In this fun puzzle game, you take control of a small, furry creature known as Kulu who sets out on a quest to help a mayor gather some World Stones in hopes of taking over the world… With lots of odd dialogue sessions along the way. (The sole reason this game is rated T) Luckily, you can easily skip the story if it confuses or bores you as much as it did for me.

When it comes to the visuals, the art style is what you come to expect from these types of games. Using an anime art style for the character images used in cutscenes, while pretty much everything else in-game is just basic shapes and designs, akin to what a mobile game would be like. (Especially when it comes to the World Maps for each area) The music isn’t worth writing home about, especially since every single cutscene recycles the same, monotonous title screen music over and over again, and the other tracks aren’t really that special either.

What makes Puzzle Adventure Blockle different from the generic puzzle games that I’ve usually played (Pushing a block around here and there, matching three tiles together or doing some sort of strategy game) comes from the fact that for once, it’s a concept that’s rarely done! The main focus of each stage in the game is to guide the yellow Katz creature to the open door by moving around the stage or rotating it to take advantage of gravity, fulfilling basic requirements to gain all three stars in order to get a crown on the level. These requirements can range from clearing a stage in a certain amount of moves or rotations, to clearing it as fast as possible, and they really aren’t that difficult to pull off, at least during the first set of eighty levels. If you happen to screw up, undoing your last move is as easy as pressing the Y button!

Along with the traditional method of heading to the exit door, some levels will add extra conditions before it actually lets you complete it. Whether that’s by having to grab a key to open the door beforehand, or by having to gather all the fruit in a stage in order for it to end, (with no door in sight) the game does try its best to shake things up every now and then. Sometimes depending on the world it’ll even introduce new stage gimmicks, such as movable balls, electrical blocks, teleportation devices and more!

In conclusion, I had a blast with Puzzle Adventure Blockle. My only real gripe with it comes from the fact that you can’t skip a level that you’re stuck on, meaning that if you’re unable to clear one level at all, you can’t progress with the game whatsoever, which is a bit of a shame as the game could easily throw a roadblock at you later on if you aren’t prepared. Still, using some clever thinking skills will get you through the normal difficulty mode with ease, so this really is only a legitimate fear when playing the harder levels or if a younger child was trying to play the game. The levels are short, simple and to the point, and none of them overstay their welcome, making this an absolutely perfect pick up and play game for the Switch’s portable mode. 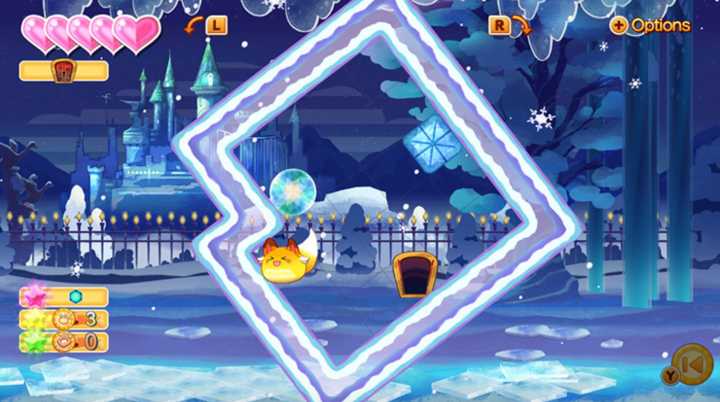