Thanks to DotEmu for the review code

After going through a beautifully designed menu meant to replicate the tropical feel of the game, the actual game itself looks just as crisp and colorful as it did back on the Neo-Geo. Unfortunately, the original attract/title screen seems to be unavailable as it was replaced by the new UI, but the original game itself is still here to enjoy, and it has an insane amount of animation going on despite being a sports game. The characters move around at a speedy and smooth pace, and the special moves are really flashy. The audio isn’t half-bad either, though I recommend you turn off the menu music as it can get really repetitive after a while, and doing so replaces it with nice ambience. Basically, when it comes to the port, the game still looks fantastic and crisp, and there are even several filters and screen sizes to choose from to fit your fancy. (I stuck with 4:3 without a background, for authenticity.)

Windjammers, like the majority of titles released for the Neo Geo has a very basic objective, tasking you with defeating all six competitors in a flying disc championship to take home the trophy! Except instead of being a short arcade game where you beat the crap out of people with your fists… You must beat them in an intense sporting match, and doing so requires that you choose between one of three basic difficulties: Easy, Medium and Hard. The only major differences between the difficulties are the reduced credits the higher you go, and how aggressive the AI is. 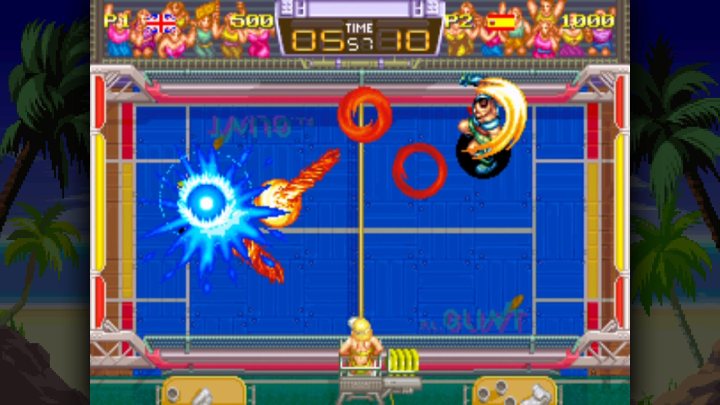 Whichever difficulty you choose, the controls remain simple, with Square and X being used to dash around the stage and throw your disc, while the Triangle and O buttons are used to lob the disc upwards to try and distract your opponent. However, if you stand under a falling disc for long enough, these lobs can end up being a big help, as it’ll let you charge up a super move that’ll cause you to toss the disc so violently that trying to stop it will require crazy reflexes! Outside of that, it’s really just a race to see who can reach a certain point threshold and advance to the next round, and once the brief arcade mode is over and done with, that’s pretty much all there is to the single player mode, outside of two basic minigames you can choose to replay from the menu. (One where you play as a dog trying to catch the flying disc and the other being a laughably easy minigame where you knock down bowling pins with the disc) 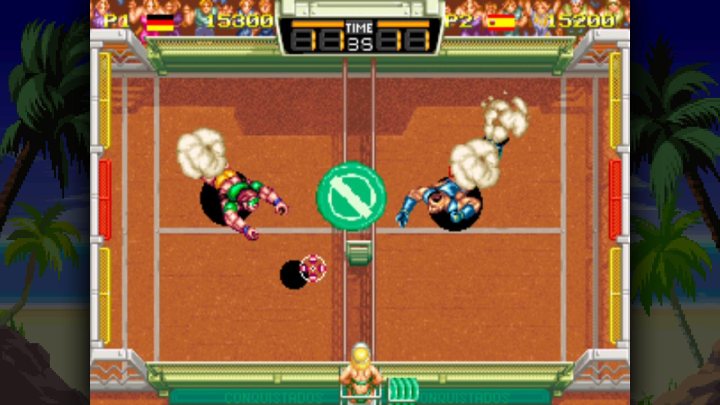 That’s why local multiplayer is where Windjammers truly shines. In this mode, you can a friend can compete in a fierce one on one match, with several point thresholds to choose from, and the two of you can just go nuts! My friend and I played this mode for a good half hour together last weekend, and it was just as fun and frantic as it was against the CPU, if not more so due to the obvious benefit of having a real person to yell at. While you can choose from all the stages and characters in this mode, I did find it a bit of a bummer that there wasn’t much else to do outside of going through every stage constantly, and after a while the appeal ran out, making this a game that I feel would be better suited for short play sessions.

Right before the review was scheduled to go live, the game launched on the EU PSN, so I was able to test the online multiplayer with actual people, (instead of empty lobbies) and I’m happy to say it runs buttery smooth, as long as both players have a stable Wi-Fi connection. If just one person has a weaker connection, then unfortunately there will be some occasional pausing and the usual lag, but for the most part I had zero issues when playing online, as the game ran just as smooth as it did in local play. Most of the trophies revolve around winning lots of ranked matches, and there’s even a league system where you can rank up depending on how well you perform in game, so there’s quite a bit of replay value to be had from this mode, more than the local play mode to say the least.

I must say, I’m really thankfully that DotEmu chose to remaster this title instead of yet another fighter, especially considering how one of the best fighters from the system is already on the PSN (in the form of Garou: Mark of the Wolves) and remastering something like the original World Heroes would be an utter waste of time. Its even sweeter when you consider that this game has barely been released, and while Hamster will inevitably rerelease it as part of the Arcade Archives line, it’ll just be an untouched local multiplayer port, so kudos to the developer for choosing an obscure yet fun title to touch up.

Considering the fun that can be had from local multiplayer, Arcade mode and the minigames, WindJammers is still a decent game to pick up if you’re a fan of arcade sports games. The trophies are really the only main objective outside of beating Arcade mode on the hardest difficulty and playing ranked matches online, so while there isn’t a lot of variety or depth to this game, what’s here is crisp and good old retro fun that’s worth a look, even if it costs nearly double the amount that the inevitable Arcade Archives version would cost. That being said, with how fun the online mode was, I think that addition alone rightfully gives this version an extra edge. I give WINDJAMMERS an 8 out of 10.