Thanks to Farsight Studios for the review codes

While Pinball FX3 focused on new and crazy ideas for pinball that can only be done on a video game table, Stern Pinball Arcade follows the footsteps of last year’s stellar Pinball Arcade, bringing home real-life Pinball Tables and making them digital. True to the title, every pinball table included in this collection is from a form of Stern Pinball, who’ve been doing a lot of modern tables as of late, not unlike how there were previous retail collections for Williams and Gottlieb.

In contrast to the vertical list of tables The Pinball Arcade offered, Stern Pinball Arcade goes for the same level select method that The Williams Collection did several years ago, where you move around a digital arcade and actually go to the cabinets. It’s not done nearly as well as in the PS3 compilation, however, as the entire arcade is just a dull, circular assortment of games, lacking the multiple rooms found in the other compilation.

When it comes to the individual tables, the visuals are a big mixed bag, especially when comparing it to fellow Switch pinball title Pinball FX3. While the level of detail is OK at best in docked mode, with everything on the tables looking as they should, handheld mode suffers from jagged edges on a few of the more detailed tables, and both modes suffer from poor visibility of the table itself! Yes, you still have multiple viewing angles to choose from, like in Pinball Arcade, but with only four to choose from and not a single one that actually does a great deal at showing the actual table, (The first three show a lot of the outside of the table, while the fourth zooms in way too far) it can become really difficult to see the text on certain tables, even in docked mode.

The lighting is also strange compared to older Farsight titles. While you are given the option to adjust the lightning and ambience for every single table, I couldn’t really find a particular setting that would make the table look just right, outside of a couple that really benefited from it due to their size. Thankfully, the audio is perfectly fine for this type of game, which each table sounding just as crisp as they did in Pinball Arcade, with the newer tables following suit with the authenticity.

Similar to the other Pinball offering, the back triggers operate the left and right flippers, while the right joystick launches the ball into the table, and the game itself has the same smooth and silky physics that The Pinball Arcade offered, meaning despite the poor visibility you’ll still be dealing with the same high quality physics found in the main entry. 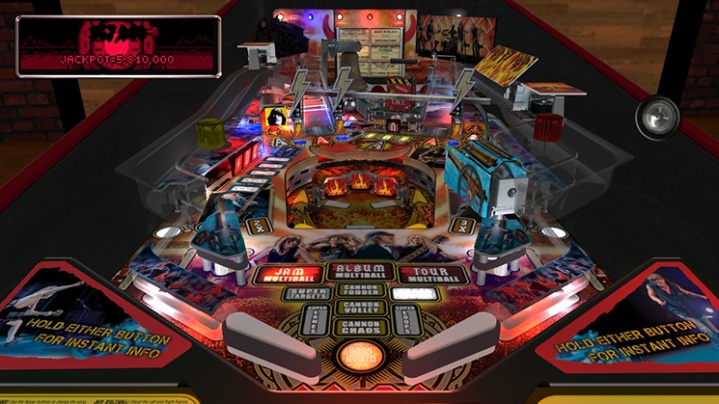 Likewise, Stern Pinball Arcade is also free-to-start on the eShop like its Wii U counterpart, although it lacks the table demos that Pinball Arcade on the Wii U offered, so for those who download this Switch eShop game for free you get the complete Frankenstein table to have fun with, which is a good thing too, since Frankenstein is one of the best tables currently available for Stern Pinball, and every single Switch owner is able to get it for no cost at all! The other ten tables are available to buy individually or in $20 bundles, but most of the other available options are a mixed bag. Honestly, I recommend you just go for the individual tables that I consider the best of the best, which for me are the Harley Davidson and Ripley’s Believe it or Not tables. Despite the horrible visibility, since those tables are basic enough that you can still do really well and don’t need to read the little details on the tables, I feel that they didn’t suffer from the presentation as much as some of the newer tables like GhostBusters and ACDC. 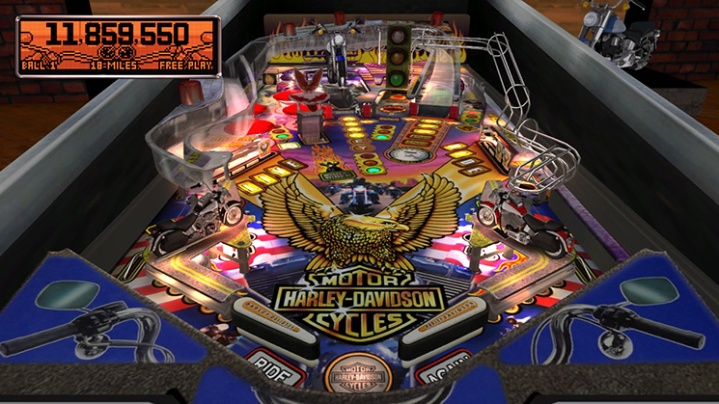 Unfortunately, even with the ability to play through a Stern Challenge, consisting of one table after another if you buy everything, (which also allows you to suspend and pick up where you left off, something playing on an individual table won’t let you do for some odd reason) there’s just a few fatal flaws that doesn’t make this compilation nearly as fun to replay as Pinball FX3, even if you buy every good table available. The biggest one by far comes from the complete absence of any online leaderboards to speak of, despite the fact that the original Pinball Arcade had them! You can still save local high scores to your Switch and challenge yourself, but if you were hoping to share to the world via the share button to encourage your friends to beat your scores that way, then your dreams are dashed as the game won’t even let you do that!

This pretty much means that outside of grabbing the highest score on each of the tables, the only replay value this game offers comes from the ten goals that each table will throw at you, with five of them being basic and the other five being challenging, complex “Wizard Goals”. Needless to say, the lack of these basic features (and even screenshot support if they didn’t want to deal with another online server for the game) really hurt the game’s replay value in the long run, and I didn’t find myself coming back to this game nearly as often as the Wii U Pinball Arcade, despite the portability.

In conclusion, Stern Pinball Arcade misses the mark compared to the main Pinball Arcade experience, and even prior pinball compilations. With no online leaderboards, no way to take in-game screenshots of the local leaderboards, a lot of lackluster tables, no way to suspend a table to pick up and play later, or even camera angles that help you see every detail of the board, Stern Pinball Arcade feels inferior in nearly every way compared to The Pinball Arcade and Pinball FX3. The only things Stern really has going for it is the option to play 60FPS in handheld mode, along with offering three incredible tables that are worth buying individually on the eShop, one of which comes with the free-to-start version of the game.

By all means, you should probably skip the retail version/complete package until it goes on sale, but the core game is still decent enough that I can at least recommend purchasing both the Ripley and Harley Davison Tables, along with the included Frankenstein table for the time being. Here’s hoping the main Pinball Arcade will come to Switch with a few more tweaks added to make it a lot friendlier of an experience for the system.

I give Stern Pinball Arcade a 6 out of 10, and only recommend that you choose the tables you like instead of buying them all at once, at least until the retail version goes on sale a bit.