Thanks to Headup Games for the review code

In a world where the ocean has taken up most of the Earth after a climate crisis, you take control of a ship that sets out to destroy out of control machine monsters that have attacked the remaining humans!

Right off the bat I have to praise Earth Atlantis for going for a really cool art style, with everything drawn in sepia-tone in a way that makes every object look as if it was made with a bunch of puzzle pieces. For a game of this genre where they could easily gone with a generic pixel art look to pay tribute to DARIUS, I am very pleased they decided to make the game stand out from the competition.

Unfortunately, there are some minor problems that this game suffers despite the unique style, most notably some very minor framerate dips whenever you fire too many bullets on screen at once or when enemies flood the screen, and a mini-map that’s only a tiny bit more helpful than the one from the original Legend of Zelda, since it barely helps you find anything outside of bosses and powerups.

The main mode of the game tasks you with hunting down an assortment of boss monsters, each with their own special attacks and traits. This is done by going from the start point and searching the watery labyrinth for powerups, health and the targets you need to take down. Due to the open-ended nature of the levels, this also means that moving left and right won’t change which direction your ship is facing, requiring you to frequently use the shoulder buttons to switch between facing left and right, and once you get used to that difference, the controls are really easy to get used to.

Sadly, the difficulty is a mixed bag, which can lead to your progress being impeded in no time at all. Thankfully, this isn’t nearly as big of a deal as it was at the game’s launch, where the first boss on the easiest difficulty would absolutely murder you in a few hits while you could barely do any damage to it. Make no mistake though, this game is still evil, but a bit more fair… Until the end of the first stage. Post the release of a patch that launched a few weeks after the game’s release, enemies now drop helpful powerups way more frequently, which can give your ship a lot more firepower or even optional side weapons such as a thunderbolt, bombs and missiles, along with useful health items for when you’re damaged. 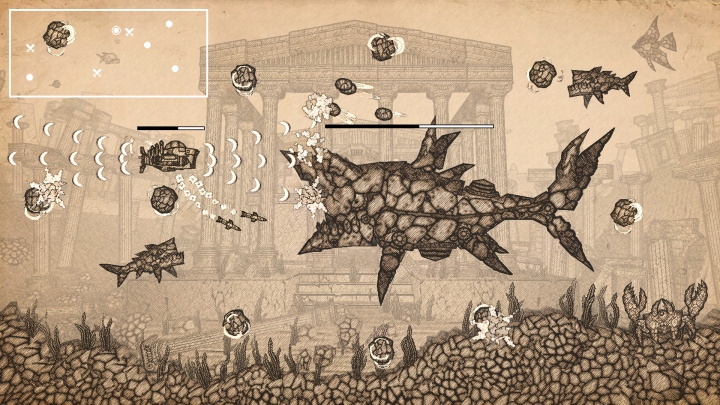 That’s why it’s a shame that despite these helpful additions and tweaks made with user feedback, there are still a few instances where bosses will murder you in a single hit, even when fully powered up on the easiest difficulty. I was actually having a lot of fun hunting down every enemy in my sight with my trusty arsenal, until I made it to what I assumed was the end of the first stage, where an Octopus showed up and destroyed my ship in a single hit, barely taking any damage when I fired at it. Considering how the other bosses only did a fair amount of damage to my ship, this was a big difficulty spike, and despite trying again and again with continues, I just couldn’t get past the boss, which was infuriating to say the least as the problem that prevented me from playing the game to begin with had returned to prevent me from unlocking the next level or ship. One hit kills are commonplace in retro shooters, as to be expected, but when the boss in question attacked swiftly and out of the blue, it felt less like a case of dodging a pattern you could memorize, and instead a trial of dumb luck. Thankfully, continuing will let you respawn with all the previously defeated bosses staying destroyed, but even this didn’t help the fact that the end-stage boss was a bit overkill even against my fully powered up ship.

In conclusion, Earth Atlantis benefits from having a fantastic artstyle and smooth controls, but that’s about it. While I’m really happy the developers acknowledged the near-unplayable difficulty of the initial release, the game is still really rough, even on the easiest difficulty. It’s a shame too, since Earth Atlantis can still be a lot of fun when it’s not cheap, and the lack of a decent map doesn’t help matters much either. For the pricetag this game is going for, I recommend you either wait for another balance patch that tweaks the easiest difficulty yet again, or for a sale where you can try the challenging ordeal for yourself. I give Earth Atlantis a 5 out of 10.